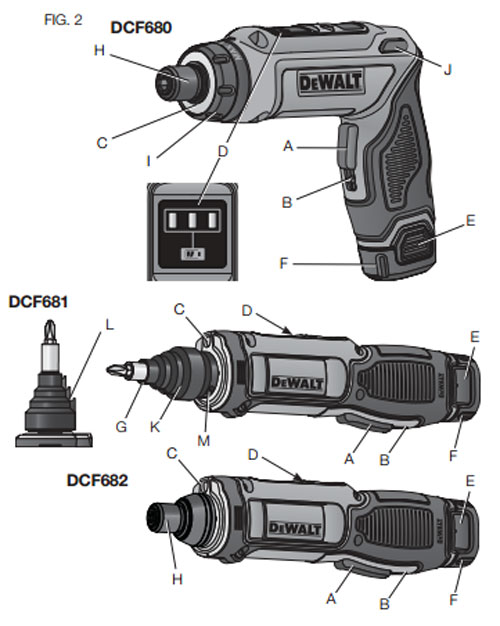 I reviewed the Dewalt 8V DCF680 gyroscopic cordless screwdriver a few months ago, and it turned out to be an okay driver. I liked it, but I didn’t love it. It took a little getting used to, mostly because I didn’t really find the pistol-grip configuration to be comfortable, especially compared to the more compact Black & Decker Gyro screwdriver.

Well, it seems like I’m not the only one who wasn’t in love with the 8V gyroscopic driver’s ergonomics, because Dewalt has just introduced two new 8V gyro screwdrivers that have non-pivoting straight handles.

All three models will be sold alongside each other:

The DCF681 is designed for deburring and fastening applications, and features a stepped conduit reamer and 1/4″ magnetic hex bit holder. The cone-shaped cutter can deburr 1/2″, 3/4″, and 1″ conduit.

When the deburring screwdriver launches in April 2014, it will be available as part of a 2-battery kit (DCF681N2) that will be priced at $139.

The DCF682, like the DCF680, is designed for fastening applications and features a quick-release 1/4″ hex bit holder.

Unlike the DCF680, the new screwdriver does not have an adjustable clutch.

If you can’t wait for the DCF681 and DCF682 to hit the streets, the DCF680 is currently available and at great pricing. If, like me, you don’t care for the pivoting handle, you could always set the driver in its straight inline position and keep it there.

Maybe I’m being short-sighted, but I really don’t like the idea of the DCF681 at all. Dewalt describes it as being designed specially for electricians who perform screwdriving and conduit reaming applications, but to me it looks like a powered conduit reamer with a secondary screwdriver function.

I don’t like the idea of high-speed cutting blades that will always be there*, even when the screwdriver is just being used for casual fastening applications and not to deburr conduit.

The cutter blades are spring loaded and are only exposed when pressed against the conduit when reaming.

It doesn’t look like the cutter blades of the DCF681 are removable**, which would otherwise be a major downside compared to using the DCF680 or DCF682 with an add-on deburring accessory. On the other hand, this means the DCF681 will probably be more compact and able to fit into tighter spaces, at least in regard to reaming tasks.

The cutter blades are removable/replaceable and look similar to the Klein 85091 conduit reamer.

(The cutter blade is replaceable, but the reamer accessory still appears to be a permanent attachment.)

Dewalt hasn’t actually announced the DCF682 yet, but we spotted it in the DCF680’s new operating instructions manual (PDF).