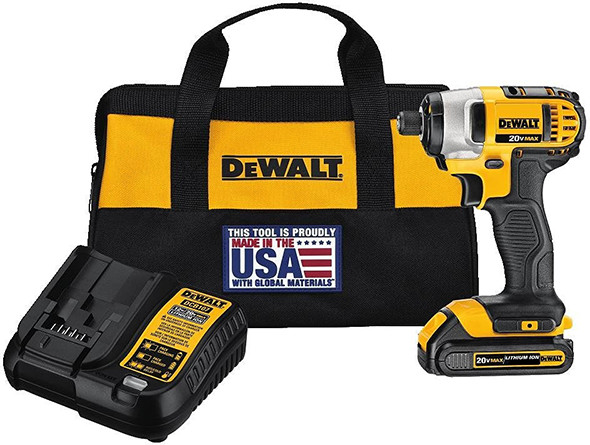 Dewalt’s DCF885 cordless impact driver has been around as long as the 20V Max line has existed, being in the first wave of tools. It’s a decent impact driver, too.

It might come to you as a surprise, that, in light of the new budget brushless drill, there’s a new budget-friendly brushed motor impact driver kit, DCF885C1.

Oh, there’s a new budget-friendly brushless impact driver too, but so far we’ve only seen it in a combo kit, DCK277C2. I’d bet we’ll see that brushless impact in a standalone kit, perhaps closer to the holiday season, as a DCF787C2 kit. But I wouldn’t bet all my chips on that.

The DCF885C1 has respectable specs:

It comes with a charger, a carrying bag, and single 1.5Ah 20V Max Li-ion battery pack.

Going by the logo on the carrying bag, it’s built in the USA using domestic and foreign parts.

This might not seem like a big deal to get excited about, but there are 3 reasons why it was post-worthy.

First, it’s a Dewalt 20V Max cordless impact driver at a good price point, and that pricing might get even better during the holiday season. Second, there are no compromises here. You get a regular line tool, and a standard capacity but regular line battery pack – not the 1.3Ah battery packs that usually come with the entry-level tools.

Lastly, there’s that built in the USA part, which separates it from the other low-priced impact drivers that are around during the holiday season.

It’ll be great if Dewalt can position this kit at $99 for the peak of the holiday season, which would make it competitive against other brands’ 1-battery impact driver kit offerings.