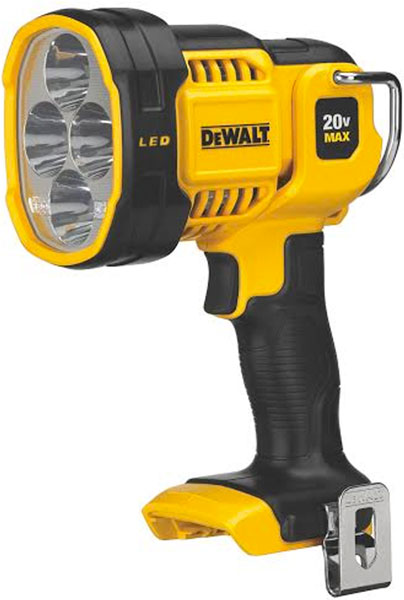 This isn’t a close-up worklight, this is a spotlight, meaning it throws a very focused and very bright beam.

The Dewalt DCL043 LED spotlight has two illumination settings – high, which outputs 1,000 lumens of bright white light, and low, which switches to a red LED that outputs 90 lumens of light.

Dewalt says that the lower powered red LED will help to stretch battery life, and that the red light should help preserve night vision. I’m no stranger to red LED and bulb flashlights, but I can’t say I have ever seen or even heard of one that delivers 90 lumens of light.

In total there are 4 LEDs – 3 white and 1 red. It does not look like the spotlight offers variable illumination where you could select between powering 1, 2, or all 3 of the white LEDs.

As with Dewalt’s other 20V Max handheld LED flashlights and worklights, this one has a pivoting head with 90° of adjustability. 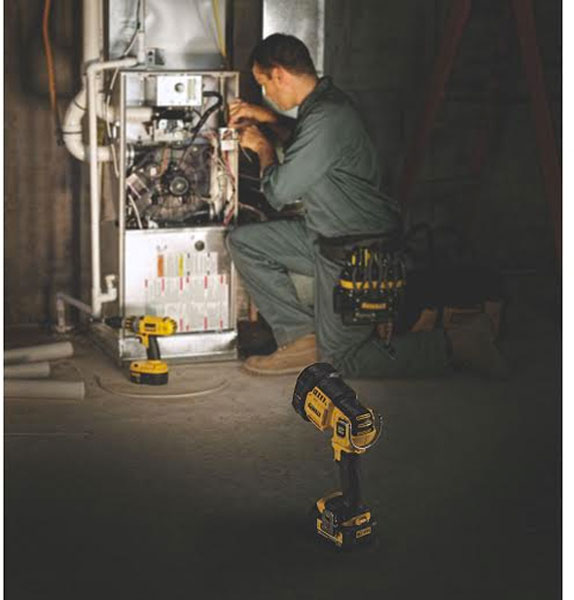 The DCL043 can be placed on the floor or other flat surfaces standing up for hands-free operation, and a hanging hook allows for even more placement flexibility.

As if all that wasn’t enough, it’s also water and dust resistant with an IP54 rating. There is also a bit of rubbery over-molding to help protect the spotlight casing. The lens is also recessed a little, which should help protect it from impacts, and there is what looks to be a very large enclosed heatsink that should help the spotlight remain cool in your hands.

While the 1000 lumens output is probably going to be way too bright for a lot of work indoors, unless the spotlight is placed well beyond arm’s reach as shown in the product photo, it should be great for use in large commercial spaces or for working outside in the dark.

Update: I have found that the DCL043 spotlight is actually quite usable for working in indoor spaces, such as in dark basements, attics, and other dimly lit spaces.

Dewalt says that this would be a great fit for anyone working in dark areas such as for site inspections, and for searching for leaks in roofs and ceilings. I think that it would also be useful for emergency workers and outdoors service responders who often need a lot of illumination in a quick and portable package.

As an aside, does anyone else think it’s curious that the recently-released DCL050 seems to be out of stock on Amazon, Home Depot, and other Dewalt dealers? Maybe this indicates that the new DCL043 is its replacement.