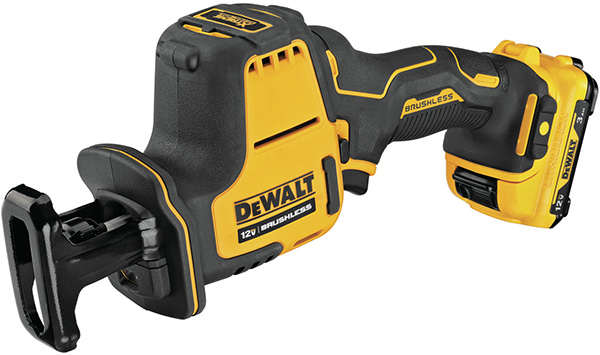 Dewalt has added a new compact reciprocating saw to their line of 12V Max Xtreme Subcompact cordless power tools, which first launched a couple of months ago in mid-2019.

The new Dewalt 12V Max compact reciprocating saw, model DCS312, is designed for one-handed use and cutting a wide range of materials, such as OVC, metal pipe, wood, conduit, and EMT. 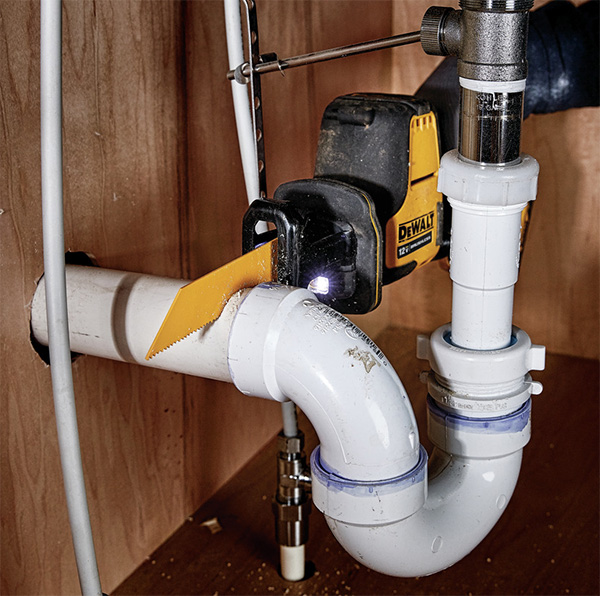 The new saw looks to be Dewalt’s answer to the Milwaukee M12 Fuel brushless Hackzall reciprocating saw, a popular compact and one-handed tool.

This is not Dewalt’s first 12V Max reciprocating saw; they released a pivoting-handle saw back in 2012, although it seems to have been discontinued in recent years. The older and new Dewalt 12V Max reciprocating saws are pretty similar in on-paper specs, but the new Xtreme Subcompact model has a smaller one-handed form factor and also a higher-efficiency brushless motor.

I bought Dewalt’s Atomic 20V Max one-handed reciprocating saw a few months ago. Frankly, I have been finding it to be underpowered for a 20V Max-class brushless-motored reciprocating saw. Interestingly, Dewalt’s new Xtreme Subcompact model is very similarly spec’ed, with the same stroke length and cutting speed, and very similar size and weight specs.

Does that mean that the 20V Max Atomic saw has 12V-class performance, or that the 12V Max Xtreme Subcompact tool is 20V-class in size?

While I feel the Atomic saw is underpowered – but still a worthwhile buy for several reasons – the same specs will likely just right for Dewalt’s 12V Max Xtreme Subcompact tool.

Curiously, the Atomic version is priced at $129, and the Xtreme Subcompact version $139.

I purchased our Atomic one-handed reciprocating saw sample, and planned to keep it for continued use. I have zero regrets, but if I’m being honest, I’d trade it for this Xtreme Subcompact model in a heartbeat, at least going by Dewalt’s press materials and the published on-paper specs and details we’ve seen thus far.

Although… I have plenty of Dewalt 20V Max cordless power tool batteries, and a couple of fresh higher-capacity 12V Max batteries that came bundled with recent Xtreme Subcompact review samples.

With the Atomic saw being barely larger and heavier than the Xtreme Subcompact version, does it really matter which is used? From what I can tell, both tools *should* deliver comparable performances given their identical cutting speed and stroke length specs. I *know* this, but my subconscious is (wrongfully) telling me that with the same specs, the 12V Max tool should have better power-to-size ratio. But then I force myself to remember that it’s actually the same size.

Looking at the kit price, that might be a very good reason to go with this 12V Max model for $30 more than the list price of the bare tool, you get a charger and new higher capacity 3.0Ah battery.

For a 12V-class tool to have the same specs as a 20V-class tool, the motor’s going to have to be more powerful. Perhaps this contributes to the slightly higher pricing?

Given the performance I’ve seen with the Dewalt Atomic model, I’m optimistic about this new Xtreme Subcompact model. Still, I find myself going back and forth about which one I’d buy if given the choice again. If Dewalt engineers their 12V and 20V Max tools to offer the same cutting speed and stroke length, and with minor differences in bare tool length and weight, how do you choose between them?

I’m not alone in having difficulty comparing the two saws (at least on paper), am I?

The kit comes with a 3.0Ah battery and charger. 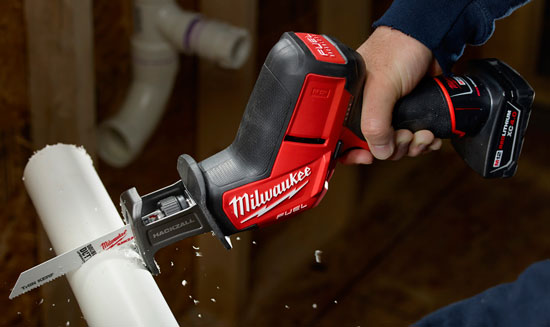 The most common comparison, at least my opinion, would be against the Milwaukee M12 Fuel Hackzall, model 2520. At the moment, the 4.0Ah kit is $179 and eligible for a free 6.0Ah XC battery offer.

The Milwaukee 2520 has a 5/8″ stroke length, 0-3000 SPM cutting speed, 11″ length (bare), and 3.2 lbs bare tool weight. Dewalt’s saw is a little lighter but a little longer (comparing bare tool to bare tool). I would have expected for Dewalt’s Xtreme Subcompact one-handed reciprocating saw to be a little more compact. Then again, Milwaukee’s M12 Fuel Hackzall is a great tool. If the new Dewalt 12V Max saw matches or bests the performance of the M12 Fuel, it’ll be a winner.

I can’t say this is the tool Dewalt cordless power tool users have been hoping and waiting for, because very many interested pros and users lost any hope in seeing new 12V Max cordless power tools from team yellow, let alone premium brushless tools.

But, I think the new Dewalt Xtreme Subcompact saw has the makings of a winner, and it has a strong chance of gaining market share – assuming users are happy with what it can do – despite it being a late entry into a maturing product category.

Dewalt sure took their time to pour renewed efforts into their 12V Max cordless power tool platform, but I’m optimistic that they took the time to do things right.

I can’t quite shake the gut feeling that we’re going to see more overlap between Dewalt Atomic 20V Max and Dewalt Xtreme Subcompact 12V Max cordless power tool offerings. With Atomic being a Home Depot-exclusive product line (their words, and with respect to home improvement retail chains), and Xtreme Subcompact looking to be a Lowe’s-exclusive product line (again, with respect to home improvement retail chains), such overlap kind of makes sense.

A couple of months ago, an industry insider confided in me that new Dewalt 12V Max Xtreme Subcompact tools would be “basically the same tool as the 20V Atomic but with a 12V battery.” Now I see what they meant, but maybe this will be the exception and not the start of a pattern. And even if it will be a pattern, I think it’s still wonderful for Dewalt to be revisiting their 12V Max cordless power tool line after so many years.