ToolGuyd > Storage & Organization > Field Test: Dewalt DS450 Tough System Rolling Tool Box in the Wilderness
If you buy something through our links, ToolGuyd might earn an affiliate commission. 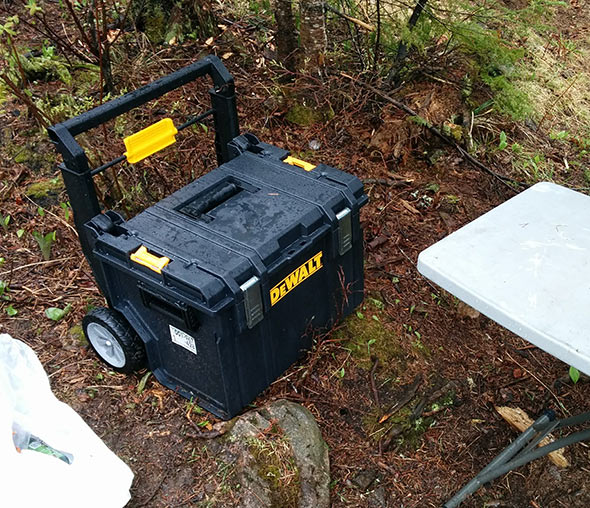 A few months ago I picked up the Dewalt DS450 Tough System wheeled toolbox on clearance at Home Depot for $30. I justified picking it up because I wanted to see how well the Portable Power Station worked with the Tough System, but I really just wanted a Tough System box to play with and had a hard time passing up the deal.

Here are the relevant specs for the Dewalt DS450:

Stuart mentioned this box last August (2016) and Home Depot carried it in-store until recently. It looks like most online retailers are selling it for $100, but Home Depot still has it online for its regular price.

Stuart’s Note: It seems that Home Depot stocks up on the tool box ahead of the winter holiday season and Father’s Day, and clears them out soon after, if any are left unsold.

Camping with the DS450 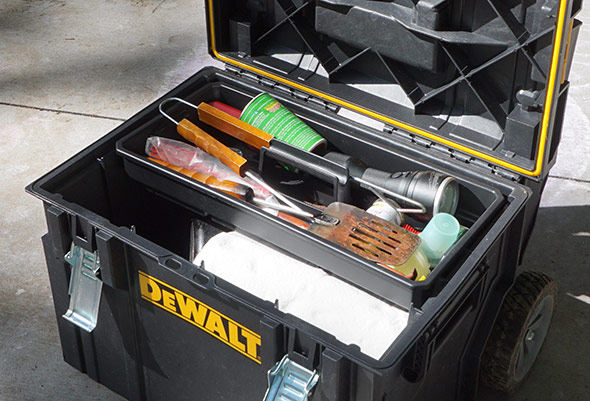 With a few wheeled toolboxes sitting unused in my basement, I decided I wanted to bring one camping with me. The main reason was because the campsite we were going to stay at was about 25 rods (400 ft) over a forest trail from where you park. Making trips back and forth along the trail and carrying heavy items like coolers and 5 gallon jugs of water gets old really fast. So I wanted something that I could load up with the cooking stuff and put heavy stuff on top of to pull through the woods.

I almost took the Milwaukee 24″ rolling bag with me instead, because it’s smaller and lighter. I was also thinking all the internal pockets would help keep things organized and the drink holders would come in handy. But I decided that the weather proof Dewalt box would probably keep my stuff dry better.

So I loaded up the DS450 Tough Box with all the stuff I usually throw into a 18 gallon Rubbermaid container: paper towels, toilet paper, small tarp, pot, cast iron pan, spatula and tongs, propane cylinder, newspaper and kindling, small bucket, spices, plates, knifes, forks, hatchet, batteries, flashlight, and other odds and ends that you need for cooking. 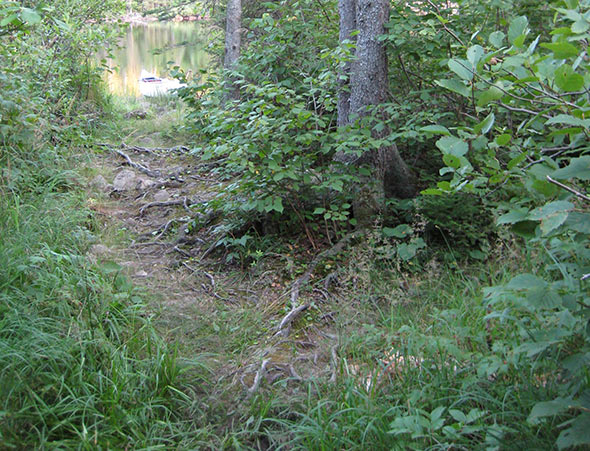 When we arrived and I saw the trail again, I thought I had made a mistake. You can see part of the trail above, from an older picture I found. If you go straight you get to the launch and if you follow the trail to the right it goes to the campsite. What you can see in the picture is actually less rugged than many parts of the trail, and this time it was quite wet with several muddy sections.

I didn’t think there was any way I was going to be able to roll the Dewalt Tough System box, so I would have to carry it. I figured I’d give it a shot anyway. I threw the 5 gallon water jug on top of the toolbox and started pulling it down the trail.

It turned out that my worry was unjustified, as the Tough System wheeled box handled the trail easily. There were a couple of times I had to drag the box over a taller rock, but it’d just slide over it with one wheel still on the ground with very little extra effort.

While the toolbox is a little bit bigger than my usual tote, it was handy having a little extra space so I could dig things out without having to pull everything out of the box. The tool tray really worked well to keep the small stuff organized and stop them falling to the bottom of the box where it’s easy to lose them. 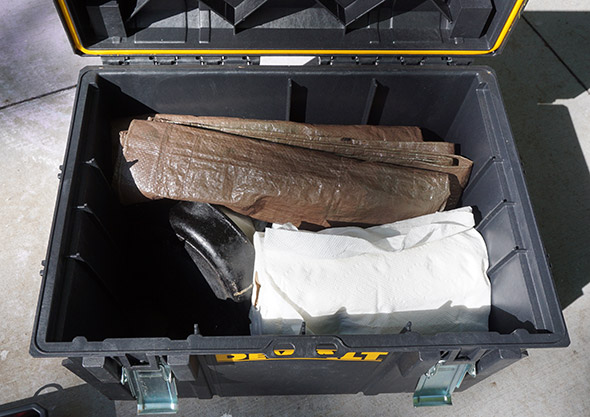 The tool tray sits on these plastic points that stick up out of the box – you can see the three points on the front and sides, and the two in the back. This configuration allows you to place the tool tray in three different positions: locked to the front, locked to the back, or sliding in the middle. I found these points kind of annoying as they kept catching and ripping the paper towel roll.

The last night it rained most of the night, sometimes coming down hard. When I woke up in the morning to start breakfast, everything inside was dry. The water seal did its job.

I’m really impressed by how well the wheels worked. They handled a forest trail pretty easily and probably would have no problem navigating most job sites.

The sealed lid kept all the stuff inside dry over many nights outside, including after one night where it rained for several hours. Remember this box doesn’t have the vent, but I have read some reviews were people left a tough box out in the rain to find water had entered though the vent.

With the open design, you can pile quite a bit of stuff inside the box. The only downside is that this wheeled box will take up more space that a regular toolbox, because of the external wheels and handle.

I also like the lever for extending and retracting the handle. It’s large, easy to twist, and works every time without the handle sticking. It also serves as a back stop so things on top of the box don’t fall backwards as you tip it back.

Depending on your particular needs, this wheeled tool box this might be a good start into Dewalt’s Tough System.