Alton wrote in a couple of days ago, asking about whether Dewalt upgraded the rip capacity on their popular DW745 table saw. He saw a user review on Amazon that claimed a new version of the saw features an expanded 20-inch rip capacity, but every online source still describes the saw as having a 16-inch rip capacity.

We asked Dewalt about this, but they have yet to respond. That’s okay, because Alton did a little investigative work and confirmed that his local Home Depot was in fact carrying upgraded saws with the new rip capacity. 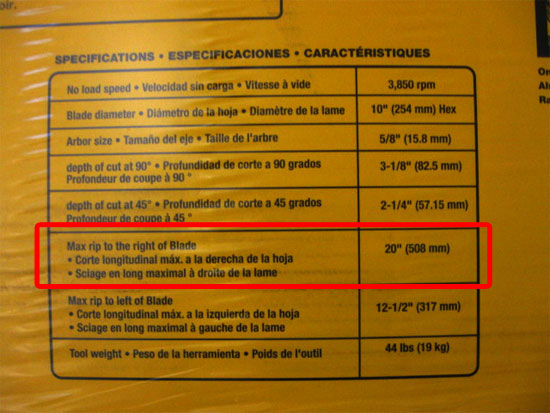 Why would you want a 20-inch rip capacity? Maybe you don’t. But the extra capacity would still come in handy should you want to make rip cuts any larger than the maximum 16″ width the previous version can handle.

The point is, Dewalt’s DW745 table saw – already extremely popular – received a subtle upgrade that is sure to make it even more appealing. Now all it needs is dado blade compatibility like the Bosch GTS1031 we reviewed.

Thanks to Alton for the inquiry and follow-up with photographic evidence!