ToolGuyd > Power Tools > Cordless > Dewalt FlexVolt Battery Pack Pricing
If you buy something through our links, ToolGuyd might earn an affiliate commission. 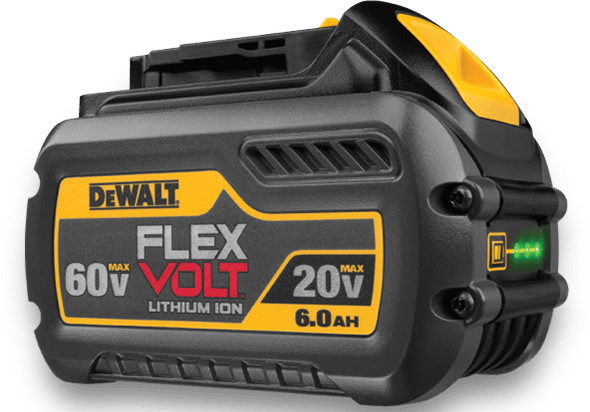 Retail pricing is out on Dewalt’s new FlexVolt battery packs (DCB606), which provide 6.0Ah capacity even if you don’t plan on buying any 60V Max or 120V Max tools to use it with.

There’s also a new 20V Max 6.0Ah battery pack on the way, which will be slightly larger than current 20V Max packs, but not quite as tall as FlexVolt packs. That’s the way of the future – higher capacity battery packs require more battery cells, or larger ones.

The pricing on these packs is lower than I expected.

By no means is this a low cost of entry, at least compared to buying into the 20V Max system, but it’s a lot lower than I had anticipated.

I like that the Portable Power Station, one of my favorite new tools from the recent Dewalt media event, is bundled as part of a 4Ah and 6Ah battery kit. It gives you 4 batteries for lower than their market cost.

A 2-pack of 4Ah batteries is $129, meaning the lowest cost for 3x 4Ah batteries and 1x 6Ah battery, if you take the 2-pack pricing into account, is $293. Going from the bare tool to the kit is a very good deal – if you need the 4Ah batteries and want to buy into the FlexVolt system.

The PPS is a pricey accessory, but it’s one that I am anticipating with huge interest. As previously discussed, it’s a 4-port parallel charger, and also 110V 15A power source which can handle you corded tools. I’ve been waiting for something like this for the longest time!

I’m not ready to give up my corded tools, but I sure am excited about the freedom the PPS will allow for!