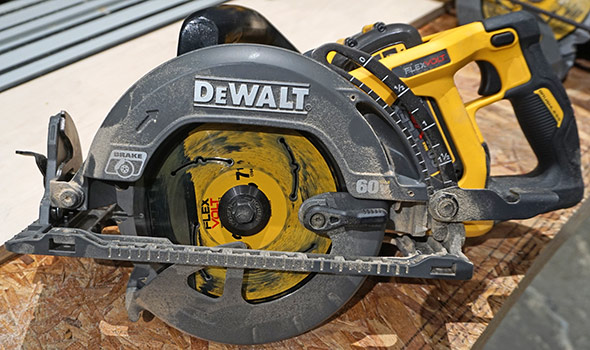 Just about everybody who attended the Dewalt Experience 2017 media event thought that the new FlexVolt 60V Max framing saw was one of the best new tools at the show.  What’s not to love about about a full-sized 7-1/4″ cordless rear-handle framing saw that only needs a single battery to rival the performance of a corded worm drive saw?

Dewalt designed this saw for framers, carpenters, and general contractors who need to cut materials like OSB, plywood, hardwood, dimensional lumber and flooring. The rear-handle design allows the user to reach farther so they can cut larger sheet goods without having to change positions

With the single FlexVolt battery running at 60V Max and a brushless motor, this blade-left saw can deliver up to 2400 watts of power, and has a cutting depth of 2-7/16″ at 90°. When the cut is finished and the trigger released, the electronic brake will quickly stop the blade. 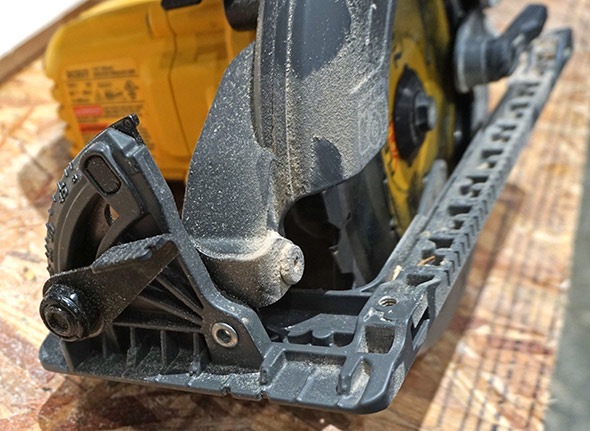 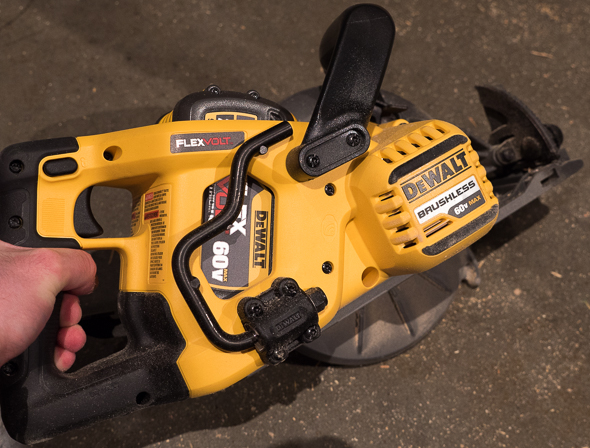 Dewalt included a rafter hook on the right side of the tool.

This saw will be available in three different configurations:

I had a chance to try this saw at the show. Dewalt had a demo setup where you cut though a stack of three 3/4″ OSB sheets. I was really impressed at how easily the saw “floated” through the stack. I didn’t have to push the saw, it felt more like I was just guiding it.

I’ve made my fair share of cuts with a circular saw, but I’ve never had the opportunity to use a rear-handled or worm drive saw before. That said, I think the reaction of the contractors at the show who use worm-drive saws all the time says more — they were impressed.

Stuart’s Note: I didn’t have a chance to demo the saw either, but observed the same – lots of “whoa’s” coming from everyone who did.

Let me explain further: At these shows, there are always several demonstrations you where you can try the tools in each rotation. There are a lot of demos that only a few people will try. Other demos are more popular and everybody wants to try them.

In the case of the rear-handled saw demo, this was one of the more popular demos I’ve seen. Every time I passed this station, there were a bunch of contractors and reviewers hanging around this demo, talking excitedly, trying out the saw, making multiple cuts, changing the bevel angle and making more cuts, etc. You could just tell this was something that they had a lot of interest in.

Another thing to note is that a 15A corded saw can only deliver a maximum of 1800 watts. Dewalt says that the new FlexVolt brushless framing saw can draw 2400 max watts of power. Both of these figures are maximums though. In practice, you can’t sustain either rating for very long. For instance you might come close to the maximum when hitting a knot.

We’ve seen a lot of excitement for this saw. Who’s lining up to buy one?