ToolGuyd > Power Tools > Cordless > New Dewalt FlexVolt Cordless Mixer Looks Like a Big Drill
If you buy something through our links, ToolGuyd might earn an affiliate commission. 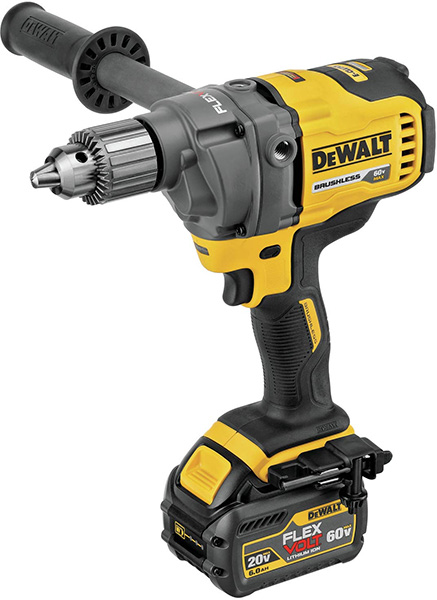 Do you remember the Dewalt FlexVolt dual-handled mud mixer that was introduced at their 2017 media event? Well, it never seemed to have hit the market here in the USA. We don’t know what happened, all I can tell you is that it was never released, and retailers have been taking down the product pages.

Don’t fret, Dewalt has come out with a new FlexVolt mixer, and with a drastically different design.

Dewalt is showing off their new FlexVolt mixer at World of Concrete 2019. More details will be forthcoming, but in the meantime, here’s a quick action video pulled from their social media.

Unlike the other FlexVolt mixer design, this new model looks like an oversized drill, complete with long auxiliary handle. What do you think?

Coming soon: The 60V MAX Mixer/Drill delivers FLEXVOLT®️ power so you can mix full buckets of concrete without being bogged down. #WOC2019 #DEWALTTOUGH

We’re not at World of Concrete, but you can find us on Instagram here.