ToolGuyd > Tool Reviews > Dewalt Folding Workbench Review
If you buy something through our links, ToolGuyd might earn an affiliate commission. 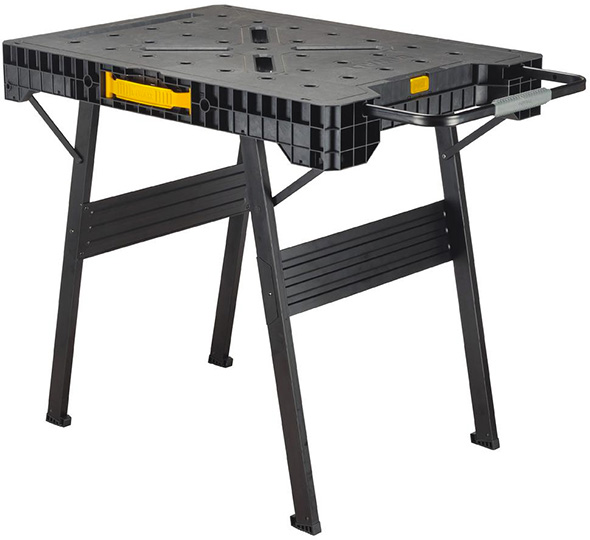 I have owned a Dewalt “Express” folding workbench, model DWST11556, for around 6 months now. I picked one up at the local Home Depot when they had displays out, around Black Friday. They’re currently still at the same price, $69.

I’ve been putting off a comparison between this and several other portable folding workbenches, but I didn’t want to wait any longer to talk about this one.

Lots of folding workbenches are quick and easy to use. This one takes “quick” and “easy” to different levels.

Sure, there are downsides. Unless I missed something, there’s no way to level the legs, in case you want to use it on uneven ground. And… that’s about the only potential downside.

Dewalt says this workbench can support 1000 pounds. I haven’t approached anywhere near that yet, but I did load it down with maybe 250 pounds of aluminum, and it didn’t budge.

There are dog holes in the top, and channels for fitting certain trigger bar clamps from Dewalt and maybe other brands.

Carrying handles rest flat and out of the way.

When I bought it, it was at least partially because readers had been asking about it, and I figured I could give it a try. On paper, or rather on a screen, the workbench doesn’t sell itself to me as much as some other models might. But in practice, it is a lot more convenient than I would have anticipated.

I like that it could be a simple folding workbench, or a clamping table if that’s how you want to use it.

The unlocking handle sticks out a little bit, and it has bothered me once or twice for taking up space, but it’s usually easily forgettable.

Lastly, it has metal legs, which helps make me more confident in its stability.

As mentioned, I bought this at my local Home Depot. Is it the most featured folding workbench ever? No. But that’s what helps make it so functional and convenient, at least for me.

I would absolutely buy it again. It’s well made, and it helps me get work done, rather than distracting me from it.

I couldn’t find a Dewalt intro video on the folding workbench (or I didn’t look hard enough), but here’s a Stanley FatMax video of the same product. It’s FatMax-branded for certain overseas markets.

One Thing to Consider…

Talking to Travis (toolsbydesign) and Ben, I was told that some people have experienced damage to certain areas of the plastic top, where a piece of the sliding channels can break. This kind of damage likely results from very specific hard impacts.

I haven’t had anything like this happen to my Dewalt workbench, and I haven’t babied it any way. I also haven’t heard about this happening to others.

This is just something to keep in mind. Not with this model, but I have seen damaged folding workbenches before. These types of products are large and bulky, and typically endure handling that’s a lot rougher than they are usually packaged for.