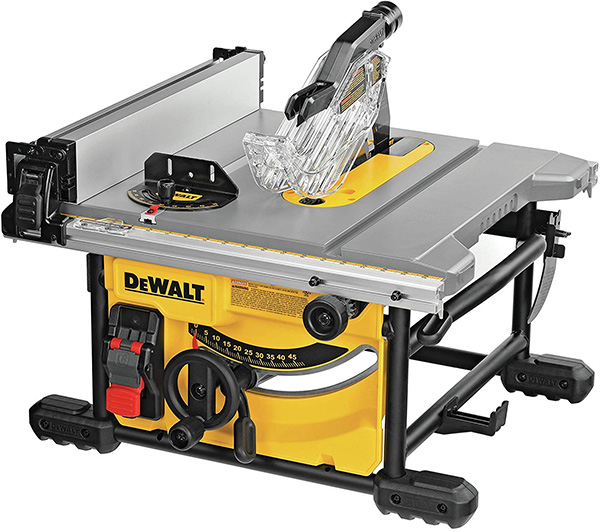 The saw comes with a fence, riving knife, anti-kickback pawls, miter gauge, and push stick, as well as on-board storage for everything.

It’s unusual for a tool like this to hit the market without formal announcement. We reached out to Dewalt for more details and will follow up when we hear back.

I’m going to start off by saying that I don’t understand the appeal of this saw. Why buy this instead of say the Dewalt DWE7480, which is similarly featured and capable?

Amazon says that the DWE7480 is discontinued and that the DWE7485 is “a newer model of this item.” Although Amazon doesn’t have it in stock yet, Home depot has quite a few of the new saws in stock at local stores.

Taking a look at local Home Depot inventory levels, most of the stores within 15 miles have 8-10 of these new DWE7485 saws in stock. They don’t seem to have any of the DW745 saw in stock, presumably because the hugely popular holiday season model sold out.

Home Depot is also reporting that there aren’t any DWE7480 table saws within 100 miles of my location. Perhaps there’s something to Amazon reporting this model as discontinued and replaced by the DWE7485.

So, what is going on?

The new Dewalt DWE7485 table saw looks to be a corded version of their DCS7485 FlexVolt cordless 8-1/4″ jobsite table saw, but with some differences.

Most noticeably, the on/off switch looks to have a new power-on cover plate. Additionally, I don’t recall Dewalt ever advertising a power-loss reset switch for their table saws before. It could be that the feature is new, or just the marketing of it.

I can’t find any details yet, but the subtle changes to the power switch screams “safety regulations update!” I haven’t been able to find any UL or OSHA updates or amendments concerning table saws, but that might also explain why Dewalt built this saw with an 8-1/4″ blade instead of the typical 10″ table saw blade size.

Dewalt’s DWE7485 table saw looks to have many if not all of the same features and benefits of their other AC-powered portable table saws, but just in what looks to be a slightly smaller (but not noticeably lighter) package.

Dewalt quietly updated their DWS716XPS and DWS716 12″ miter saws a couple of months ago. This new table saw might be considered more of an update than an all-new model, which would explain its quiet release.

Bottom line, Dewalt has a new AC-powered jobsite table saw, featuring a 8-1/4″ blade size and max 24.5″ ripping capacity. The circumstances and context of its design and launch are elusive at the moment, but we expect for our Dewalt contacts to clear things up.

If the DWE7485 saw is replacing the DWE7480, what will that mean for users? Will whatever prompted this also affect the DW745? The DW745 and DWE7480 have been hugely popular compact table saws with pros and DIYers alike, especially thanks to aggressively-priced holiday season promos.

Thank you to Chase for the heads-up!

Update: We’ve heard from a couple of people who are saying that the 8-1/4″ blade size was necessitated by updated UL regulations. @bleedsyellow said that updates to UL 62841-3-1 went into effect August 2019 and requires that “the table of a table saw has to be of certain ratios on the left, right, front, and back of the blade based on the blade size.”