ToolGuyd > New Tools > New Dewalt Jobsite WiFi and Internet of Things Platform: “The Future of Construction”
If you buy something through our links, ToolGuyd might earn an affiliate commission. 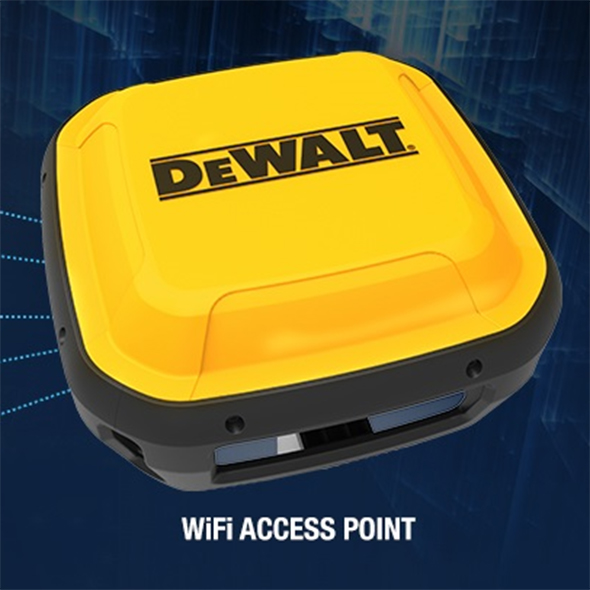 Dewalt announced yesterday that they will be coming out with The Future of Construction that will introduce the new age of jobsite connectivity.

They will start off by launching a fully connected system, including WiFi mesh network, and later there will be an Internet of Things platform that will enhance productivity, profitability, and safety on the jobsite.

Okay, so there’s a new rugged jobsite-friendly Dewalt WiFi access point coming out, and Dewalt intends for several to be used to create a mesh network that will connect users together.

Dewalt Wifi enables general and trade contractors to collaborate in real-time across large-scale jobsites and to easily access critical site information such as prints, schedules, budgets, and RFIs.

My question is this: when a new building goes up, how is such information presently shared?

I can see the benefit of a ruggedized access point, but questions remain. Is it connected to the internet, and if not, is it simply a WiFi network for user-to-user connections? If so, there would need to be software and apps to support file sharing and communication.

As for the Internet of Things (IoT) aspect, Dewalt mentions their Tool Connect inventory management system as being one component of “total asset management” that “will become part of the larger digital platform providing critical data to inform decision-making.

A technologist for a construction company was quoted in the press materials as saying:

I have never worked at a large commercial jobsite, so perhaps that is why I am not quite seeing the “potential and opportunity” for this system.

Dewalt’s announcement seems premature, as there are scarcely any details for substantial commentary.

The press materials start with:

DEWALT announces the new age of jobsite connectivity with its unprecedented effort to make building more efficient through digital solutions. Over the coming months, DEWALT will launch a fully connected system, including WiFi mesh network and, later, an Internet of Things platform, to enhance productivity, profitability, and safety on the jobsite.

So the launch of the “fully connected system” is way out, with the WiFi mesh network being months away, and somewhat vague Internet of Things platform promises even further out.

I’m sorry, but I find myself rolling my eyes a bit.

The announcement tries hard to fill readers with excitement and positive emotions – and I’ve found that it does do that to me to an extent – but what I see is skin and no meat.

There’s lots of talk about jobsite needs, and promises that Dewalt will meet those needs thanks to their “unprecedented efforts.”

Are the access points powered by 20V Max batteries? Will they be better than similar consumer products? How?

Where there be an internet access point to connect the network to the internet? If a 3rd party device is needed, what’s the benefit of Dewalt’s products in comparison? (That’s why I’m wondering if the access points will be 20V Max battery-powered.)

At the microsite, it says Dewalt’s “patented wireless-mesh technology” expands “single-location WiFi to the entire jobsite.” Okay, so that suggests it requires an existing WiFi access point. This allows “site managers” to “connect to the internet where they need it most.”

Oh, okay. But… why wouldn’t a site manager tether from their smartphone or tablet, or have a plug-in cellular module for their laptop?

Beyond that, it mentions that the new Dewalt access point will increase productivity, enabling the sharing of real-time data, and allow connected parties to collaborate live.

This is all very exciting, but I’m not excited yet. Then again, I’m not a commercial contractor, and I’m not yet seeing the potential any of this could bring.

You know what I think? Milwaukee’s NPS17 – their annual new product media event – will take place next week. Last year, Milwaukee’s social teams were very active during Dewalt’s event, fiercely talking up their 9.0Ah HD battery pack while Dewalt’s FlexVolt news was being trickled out by the media. I think that Dewalt knows of an upcoming Milwaukee One-Key technology release or announcement, and is trying to “steal the show” a little bit.

If true, I can’t blame them, I just wish there was a lot more to go on.