ToolGuyd > Hand Tools > Layout & Measuring > A New Small Dewalt Laser Distance Measuring Tool for $50
If you buy something through our links, ToolGuyd might earn an affiliate commission. 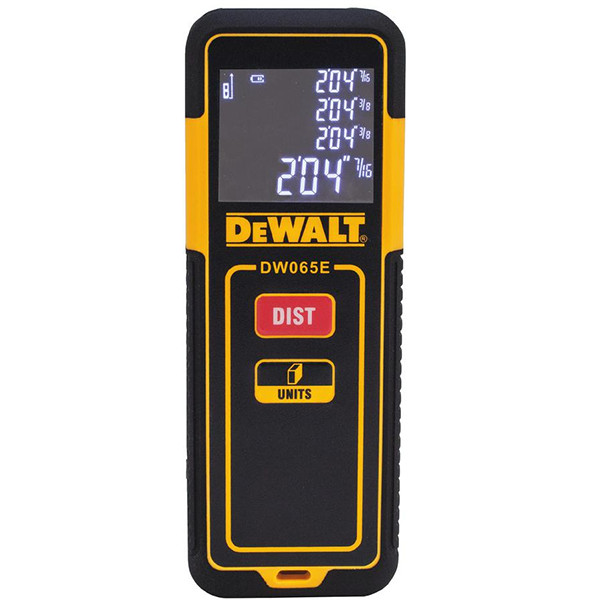 Dewalt has come out with a new compact laser distance measuring tool, the DW065E, with a 65′ range, 1/8″ accuracy, and more features than we’d expect to see in a $50 laser tool.

That’s pretty much all we know right now. There’s a units button, so maybe you can cycle through fractional, decimal, and metric units.

As of the time of this posting, the DWE065E was listed at Home Depot and Amazon, but is not actually available for purchase yet. Check back soon.

I believe it was Bosch that kicked off the compact, inexpensive, and less frilled laser distance measuring tool trend, with their GLM 15. Now, there’s the less expensive GLM 10, the GLM 20 with greater range and backlit display, and several larger and more featured models.

Dewalt isn’t new to the laser distance measuring tool business, but this new 65′ model looks to be their first in the compact and short range market.

I have found short laser distance measuring tools to be quite useful indoors, especially where a 25′ tape measure might be nearing towards the end of its range.

Let’s say you want to measure the wall-to-wall distance or area of a room that’s filled with furniture. It’s far easier to whip out a laser distance measurer than to extend a tape measure, especially if you’re working solo.

I can’t find the dimensions anywhere, but am willing to bet that the new Dewalt DW065E can easily fit in a pocket.

Its ETA is unknown, but since it’s posted on Dewalt.com and now listed at some retailers, I’d guess it’ll become available by January or February 2017.