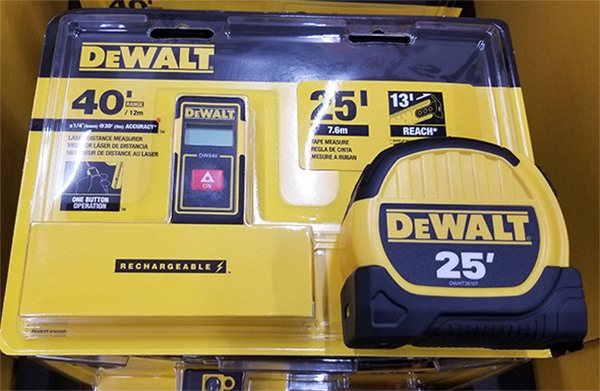 Over at Home Depot, they came out with a new Dewalt laser distance measuring tool and tape measure combo pack, a special buy that’s priced at $30.

Dewalt has previously come out with a tiny pocket-sized laser distance measuring tool, and the new model looks similar but is advertised as having a 40′ range instead of the other tool’s 30′ range.

Both feature a built-in battery that charges via USB. 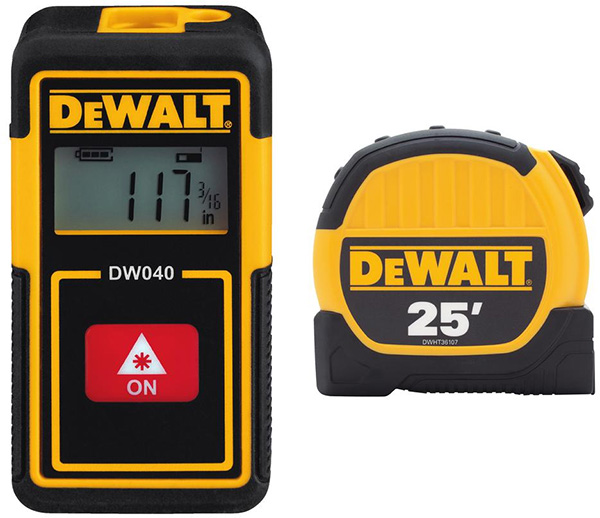 The online image of the bundle is very size-disproportionate, but gives you a clearer look at what you get.

Let’s talk about this deal for a moment. A laser distance measuring tool and a Dewalt 25′ tape measure for only $30?

Right now you can get the same Dewalt tape measure in a 2-pack for $15. I can’t find a lot of pricing information for the laser, but Home Depot currently has it listed for $25 online. So, if we’re looking at value pricing, you could buy the same tools separately for ~$32.50 if you can split the tape measure 2-pack with a friend.

So, with this special bundle, you’re saving $2.50 compared to buying the same tools separately.

However, it’s small – really small – and compact than most if not all of the other single-button laser distance measuring tools I’ve seen.

The tape measure is okay – it seems to be a good value if you’re on a budget. 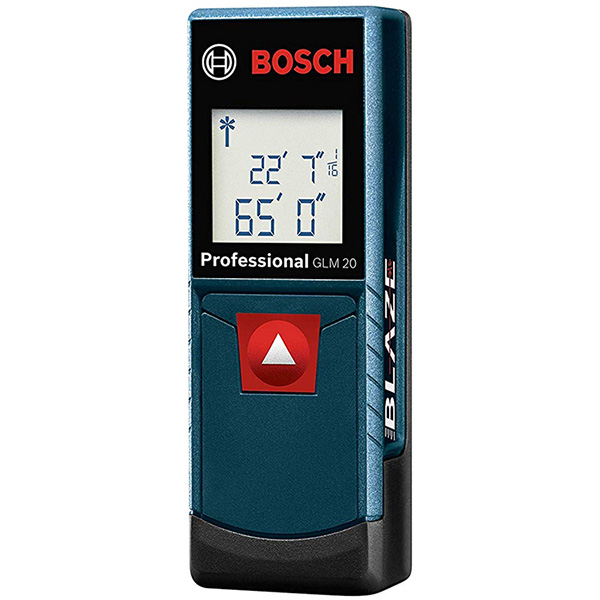 Personally, I like Bosch’s GLM 20 (or GLM 20X) laser distance measuring tools better, although getting this laser and a 25′ tape will cost more than $30.

I don’t like having so many USB-rechargeable lithium polymer battery devices around. The Bosch takes AAA batteries. The Bosch is also not as small as Dewalt’s. Actually, it’s very small compared to more-featured and longer range laser distance measuring tools but comparably much larger than Dewalt’s.

Buying this Bosch laser, plus maybe rechargeable batteries (I’ve had a lot of bad experiences with alkaline batteries recently, and according to readers a lot of other brands have issues too), and a 25′ tape measure would likely push the total cost over $40.

At my local store, they have the Dewalt bundle deal and Bosch laser right next each other. It’ll be interesting to see which one sells better, seeing as how they’re both $30 special buys.

The Dewalt has a lot of good things going for. Well, three things – it’s very compact, it has a built-in battery (although this is a downside if you ask me), and $30 for a 40′ laser and 25′ tape measure is a decent deal. To be accurate, right now I feel it’s an *okay* deal, and that it’s a *decent* deal if the bundle was this price the other 10 months out of the year.

The purpose of this post isn’t to be negative about the Dewalt bundle, but to break down what you get and why. If you’re okay with what you get, go for it! If not, you’ll have to budget more for better options, because you certainly won’t get anything better for less than $30. Unless of course they slash the price for Black Friday, but given what you get I don’t think there’s much flexibility in the pricing.

The accuracy could be better, but maybe that would make the laser distance measuring tool much larger. I prefer AAA batteries over rechargeable, but that’s a personal preference.

As for the tape measure, I believe this is Dewalt’s least expensive 25′ tape. It’s basic, but no glaring “gotcha’s.”

New Dewalt XP Tape Measure – is it Worth the Hype?