ToolGuyd > Power Tools > Saws > Dewalt Miter Saw XPS Work Light is Far Better Than Any Laser
If you buy something through our links, ToolGuyd might earn an affiliate commission. 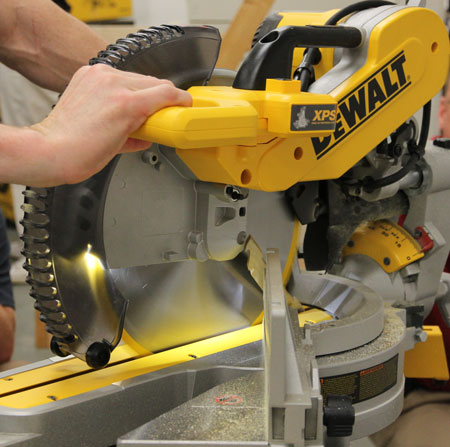 Back in June, I had the opportunity to try out Dewalt’s new DWS780 12″ sliding miter saw, an impressively nice saw (more on that later). What really stood out and amazed me was its integrated XPS (crosscut positioning system) work light module, which performed far better than any miter saw laser system I have ever seen.

Dewalt’s integrated XPS work light is not an entirely new concept, as an add-on XPS module first appeared a couple of years ago, and this was my first time seeing it in action.

Some miter saws feature built-in laser systems, and for those that don’t you can often purchase an add-on accessory. Lasers must be perfectly calibrated, or else their line positions may be off, throwing off your cut accuracy. Laser line width is also often fixed, and may not match up with the thickness of your saw blade.

How does the XPS system work?

Position your cut-line to the laser-like shadow, and you will have perfect alignment every time. Changing to or from a thin-kerf blade? No problem, the width of the shadow is created by the saw blade, so the shadow will thin or thicken accordingly.

Whoever it was that came up with this design definitely deserves recognition. I imagine that a bit of trial and error and design engineering went into developing this feature, but the underlining concept is beautifully simple.

During our brief time with the saw, it was clearly evident that the XPS work light feature can help users make very accurate cuts with minimal effort.

Added note: In the comments below, Joel brings up a good point – how effective will this be outdoors in harsh sunlight? Will the LEDs and shadows be completely washed out? I have looked into the matter, and was told that some users rotate their saw stands until they are in position to block some of the incident sunlight with their bodies.

A couple of more photos: 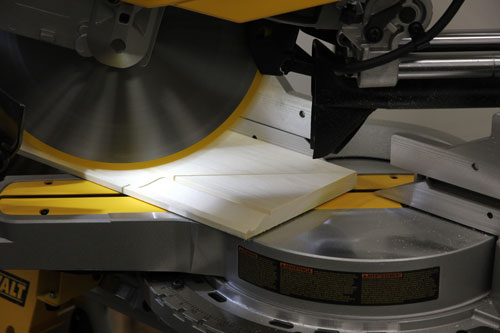 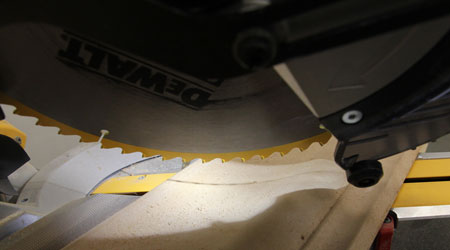