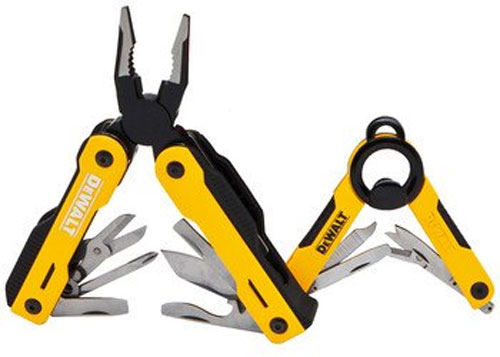 I was at my local Home Depot the other day, picking up an online order, when I came across a Dewalt multi-tool gift pack. It included Dewalt’s new multi-tool and keychain multi-tool for just $19.88.

It struck me as odd that Dewalt, a company that prides itself as being a professional tool brand, would market their new hand tools as a consumer holiday gift package complete with fold-up packaging and a slide-out red bow. But my curiosity got the best of me and I bought a set for testing.

The set comes with a smallish traditionally-styled pocket-sized multi-tool, and a keychain-sized tool. Both are described in more detail in our Dewalt multi-tool preview from earlier in the year.

It looks like you can only buy the gift set at Home Depot stores, as they aren’t even listed on Home Depot’s website. If you want to call your local store to see if they have this, the receipt lists the UPC as 076174724196, and the model number is DWHT72419L. A few online vendors list the gift set but don’t have any in stock.

Update: this combo kit has dropped in price at local Home Depot stores, at least those that haven’t sold out yet, and you can also buy it from Amazon for $20-22. 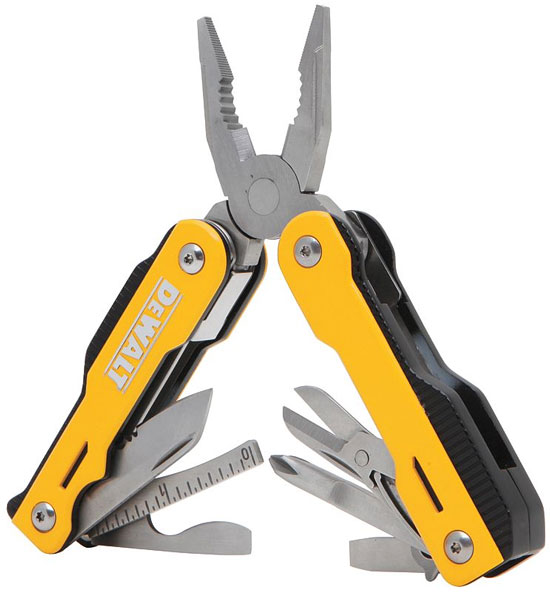 I don’t want to say that Dewalt’s multi-tool (DWHT71843) is junk, but it’s definitely not what I expected.  I’m used to using and working with Leatherman multi-tools, and these just feel a little cheap and almost haphazardly designed.

While the image here shows all-silver pliers, the product model has a shiny black finish with silver outer jaw accents.

My first complaint is how the multi-tool fights you a little whenever you open and close the pliers. Whether this is balanced by how have a spring action depends on how much you use them.

The outer tools tend to clump up a little bit, but not terribly so. The knife deploys, locks, and unlocks fairly easily. Some of the tools, such as the file/ruler, require a little more digging around with your nail to fold out.

The scissors are a hassle to fold back into the knife. They deploy easily enough, but you have to take extra time and effort when closing them. Otherwise the inner scissors handle knocks into the inner wall of its docking area and prevents the scissors from folding in all the way. You have to squeeze the jaws of the scissors a little before they can be wrangled back to their closed position.

I would have been happier if the handle was a little larger, and if the pliers didn’t open as wide as they do, but these are more minor complaints than the others.

Overall, the Dewalt 16-in-1 multi-tool is usable. I’ve seen worse, but I have also seen a lot better. This is about the best I’ve seen at the sub-$20 price point. 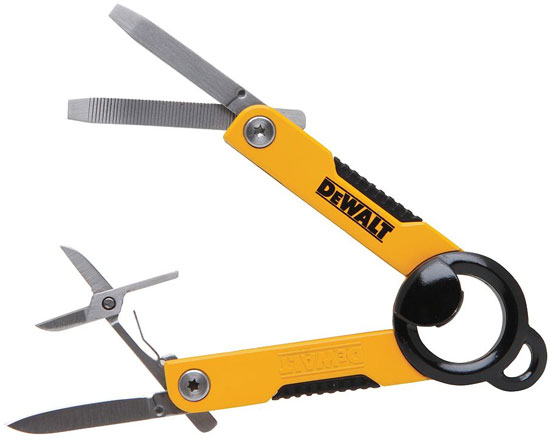 I was really excited about Dewalt’s keychain-sized multi-tool (DWHT71842), and it doesn’t really disappoint.

My only complaint is that there are no ball detents to keep the two arms securely closed together when the pliers are being carried. A small rubber band or O-ring across the bottom should suffice if this ever proves to be an issue.

The tools clump together a little, but since there are only two tools on each side, this isn’t an issue. As with the full-size multi-tool, extra attention needs to be paid when folding the scissors closed.

Overall, I find this to be a neat little keychain tool, and might clip it to my bag. The bottle opener seems stout, and I like that the lanyard hole is very robust, although I don’t think I have a keyring strong enough to fit.

While the fit and finish could use a bit of refinement, this is a tool I would buy again for personal use.

Check out some of our other multi-tool reviews!