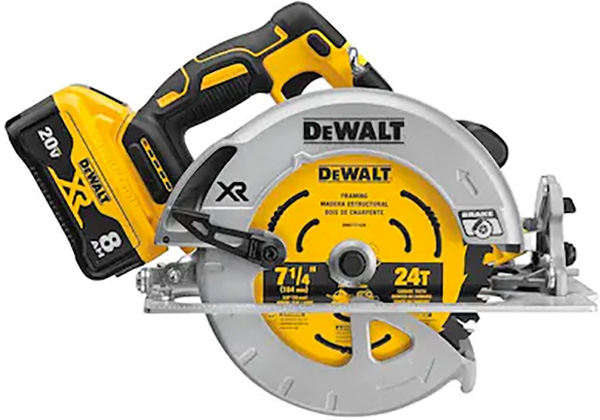 Dewalt has come out with a new higher-powered 20V Max cordless circular saw, DCS574. Thanks to Dewalt’s new Power Detect technology, the new brushless circular saw can deliver max performance when paired with a higher-capacity battery, such as their 8.0Ah pack.

Dewalt says that the new 7-1/4″ saw is up to 54% more powerful than their DCS570 brushless circular saw, also part of their 20V Max lineup.

Using the 20V MAX 8Ah battery, the DCS574 Circular Saw will output up to 54% more power and get 60% more runtime than the standard XR Circular Saw DCS570P1.

“Power Detect” detects the presence of a higher current battery pack to deliver more power to the motor, translating to greater tool performance.

At the time of this posting, Dewalt is not yet ready to answer media questions about Power Detect or any potential limitations. Until they can, we presume that the tools will perform comparably to like-designed “standard” tools of similar design.

Thus, until or unless we learn otherwise, we’re assuming that the new Power Detect circular saw operates like a DCS570 when paired with a lower capacity battery pack, such as a 5Ah battery), and delivers greater performance when paired with a larger battery like the 8Ah it’s kitted with.

At the time of this posting, Dewalt Power Detect cordless power tools are only available at Lowe’s.

It’s worth noting that Dewalt recently bumped up the power of their FlexVolt circular saw, DCS578.

My interpretation is that instead of simply bumping up the specs of their 20V Max saw, Dewalt is launching a separate model that is more powerful with their higher capacity battery packs.

The pricing is a bit higher for the new kit than for their “standard” brushless 20V Max circular saw kit, but that’s partially due to the premium for the 8Ah battery instead of the 5Ah battery bundled in the standard kit.

Things seem a little blurry right now. Someone asked whether Dewalt will be discontinuing the older models and replacing them with these new Power Detect tools. I don’t think so, but it’s possible. Or at least, I don’t think that these will be the only kit options. It’s certainly possible that Dewalt will have Power Detect and “standard” kits that feature the same saw.

How does this tool differ from the “standard saw?” From what I can tell – remember, Dewalt has said they’ll start answering media questions in a couple of weeks – the changes are all internally, possibly with the motor but certainly with the electronic motor controller.

If Lowe’s is an exclusive launch partner, the DCS570 will of course continue to be offered at other retailers. Maybe that will chance if or when the DCS574 sees greater distribution.

More choices are better, and for users who want as much power as possible – and are willing to pay the premium for higher capacity batteries – this is a 20V Max option that works with your other batteries in a pinch.

One thing that’s not clear is this – how does this new circular saw compare to Dewalt’s FlexVolt saw? On paper, the FlexVolt is a little faster, but what about in respect to power? This new saw is up to 54% more powerful than the DCS570. Does that put it on-par with Dewalt’s FlexVolt circular saw? I’m sure Dewalt can put things into perspective once they’re ready to formally talk about this and the other new Power Detect tools.