ToolGuyd > Power Tools > Grinders & Sanders > New Dewalt Power Tools, Nailers, & Drill Bits for 2015
If you buy something through our links, ToolGuyd might earn an affiliate commission.

I already gave you guys a sneak peek at Dewalt’s latest cordless tools, and a look at Dewalt’s latest mechanics and hand tools. There are some other new tools you might be interested in hearing about, including corded power tool developments, nailers, and drill bits.

There’s not too much going on in the corded tool world these days, as brands place more and more emphasis on cordless tools. The same is true in the air nailer arena. If a particular tool or product category catches your interest, let me know and I’ll keep in mind to take a closer look once the tools hit the market.

And as before, I’m interested in hearing about which tools you might be most excited about. For me, it’s a tie between the angle grinder cut-off wheel guard and new drill bits. 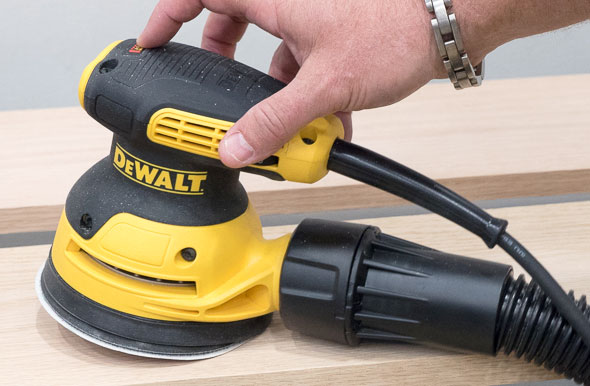 There are going to be two new sanders coming out – a variable speed model shown here, and I believe a single speed model. It’s designed to mate with Dewalt’s dust collection vac, and I’m sure you can use other vacs with it as well. 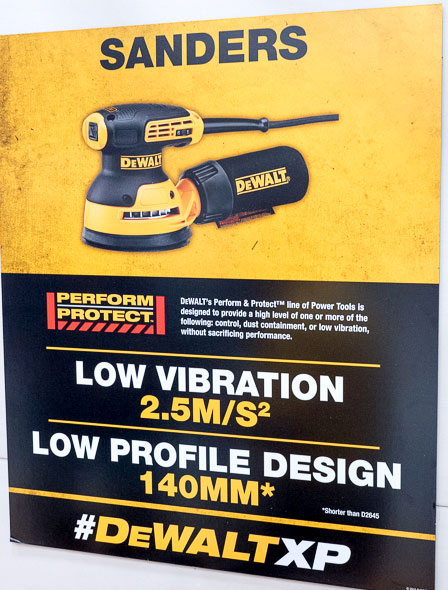 Dewalt made claims of low vibration, and I found this to be quite true.

They also said it has a low profile design, but if you follow the asterisk, it’s just lower in profile than their current model.

Dewalt once offered a truly low-profile sander that’s based on a Porter Cable sander design, but it has been discontinued. I asked about why that sander is no longer available, and was told that they used a very specific motor for that model, and they can no longer buy that motor. 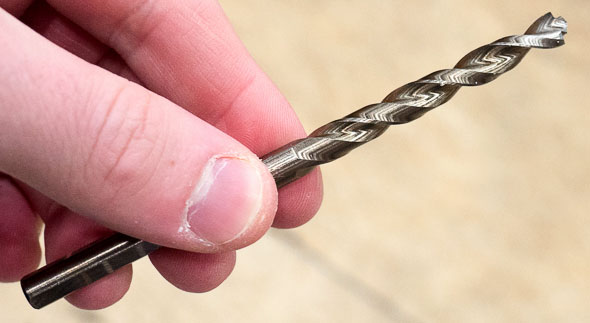 You can’t really tell here, but the tip has a different hue than the rest of the drill bit, indicating a slightly different alloy composition. Or something like that; Dewalt was a little quick with details and I didn’t have a chance to go back and ask questions. 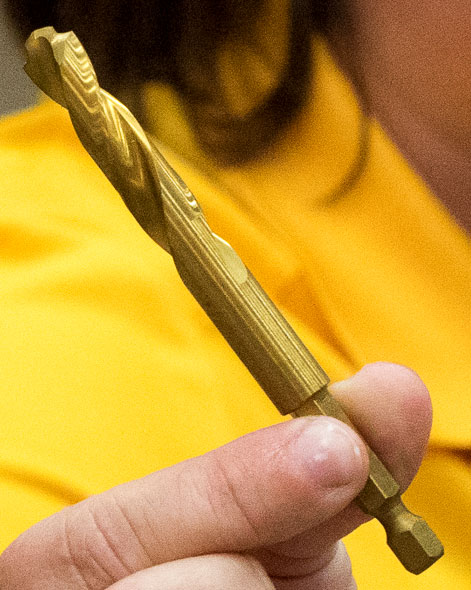 Here’s another somewhat blurry shot. Sorry. The product manager kept waving it around and I didn’t have the best lens for photographing drill bits. 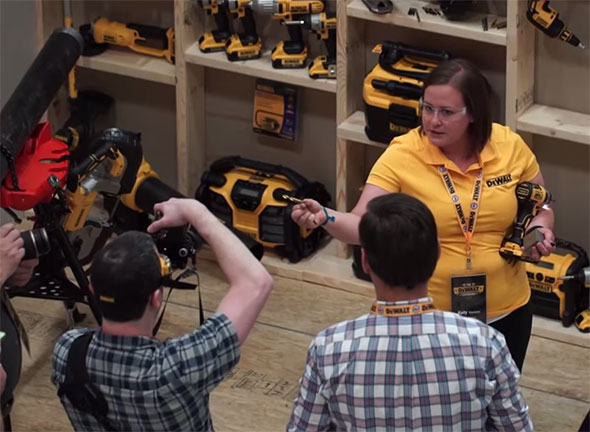 Oh, and here’s a photo of me taking a photo of the drill bit. Haha. Dewalt took a video of us from above.

We had to wear safety glasses on the factory floor. And since I wear corrective lenses for my nearsightedness, I brought my own safety goggles. Gotta practice proper PPE, no matter what.

New SDS rotary hammers follow with Dewalt’s Perform and Protect safety mantra. I’m going to have to try one out at some point – it looked decent and had anti-vibe handles. 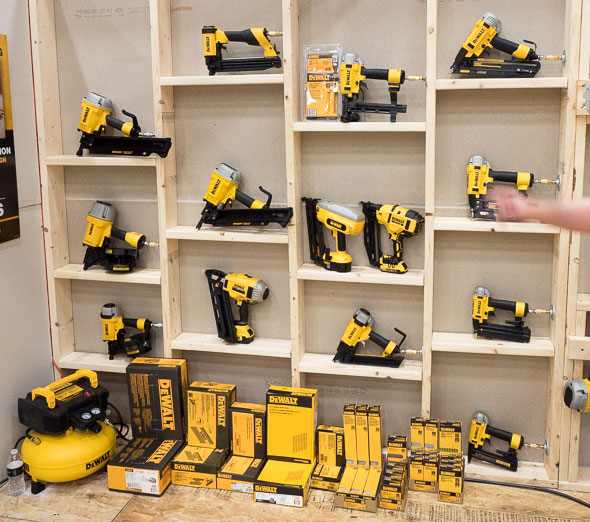 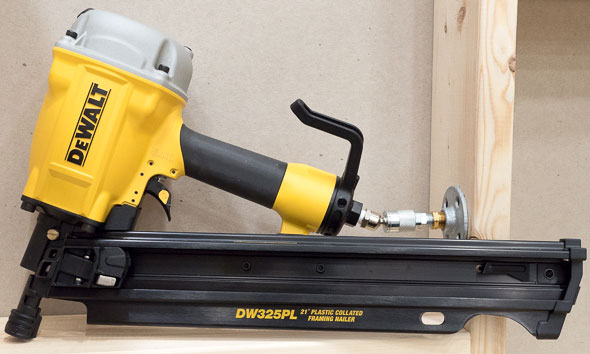 The new DW325PL framing nailer is said to be a lot more compact than other other models. I briefly looked into this claim, and it seems to be true. Sorry, I’m not a framing nailer kind of guy. 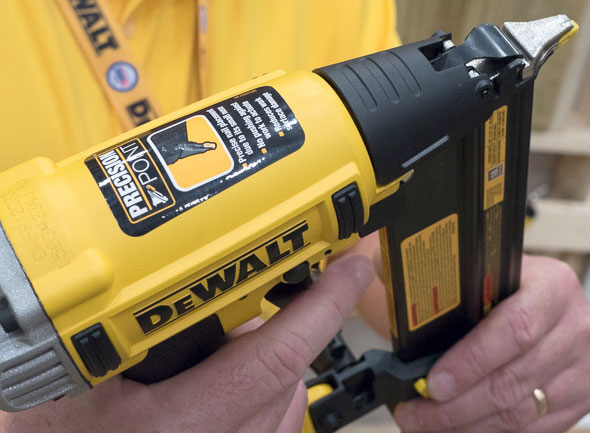 These are similar to Bostitch Smart Point nailers, which we previewed and then reviewed here. The narrow and tapered points allow for greater nail-placement precision. 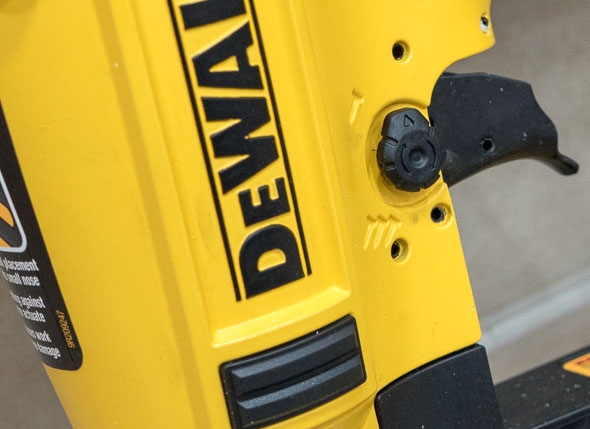 There’s also a new single drive and sequential drive mode selection switch on many if not all of these new air nailers. I liked the idea of it, but found the knob to be a little tough to grab, but how often are you going to change driving modes? Maybe the strong retention is a good thing.

To change modes, you’re supposed to pull, rotate, and set. If I recall correctly, it has spring retention so that you don’t have to push back to set the mode, simply release the knob. 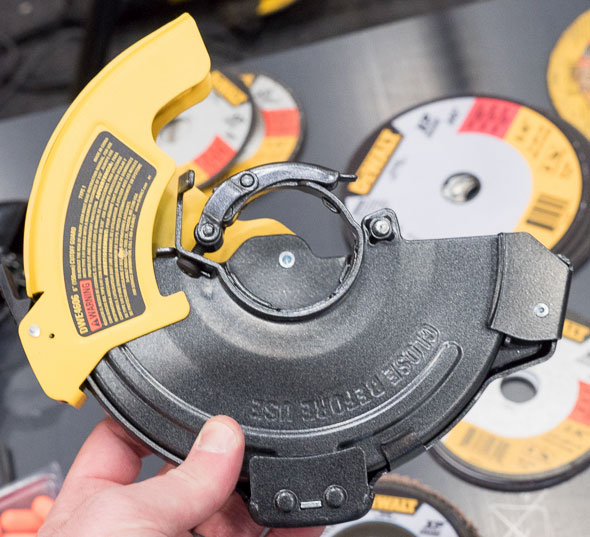 Dewalt is coming out with a new adjustable cut-off wheel guard that provides greater protection than the 180° coverage typical guards provide. This might further reduce the chance of injury should a cut-off wheel fail and shatter during use.

I’m going to be honest here – I wasn’t paying full attention and was eager to move on and get to the drill-building station. I can’t tell you if this is a drop-in accessory for 4-1/2″ grinders, 5″ grinders, or a specific model of grinder.

I also don’t have a press release to draw such details from yet, but I know that more details will come with an official announcement. Or maybe someone at Dewalt will read this and send more details without my asking. It’s one of many dozens of questions I have about the new products, but as mentioned sometime in the past week, I’m sitting on them until the press releases and official fact sheets and info is made available. 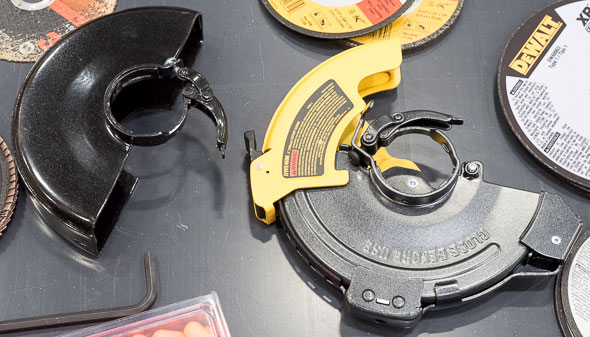 Here’s a side-by-side comparison with a standard guard that provides 180° coverage. And if you notice the black lever on the yellow adjustable guard piece, that’s how you adjust the guard tool-free. 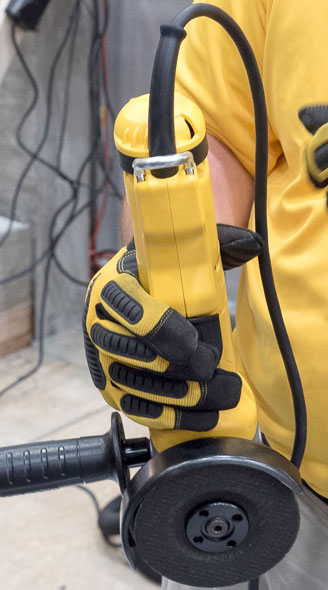 This new grinder has a built-in safety tether.

And here it is, hanging from something by a safety tether and carabiner. 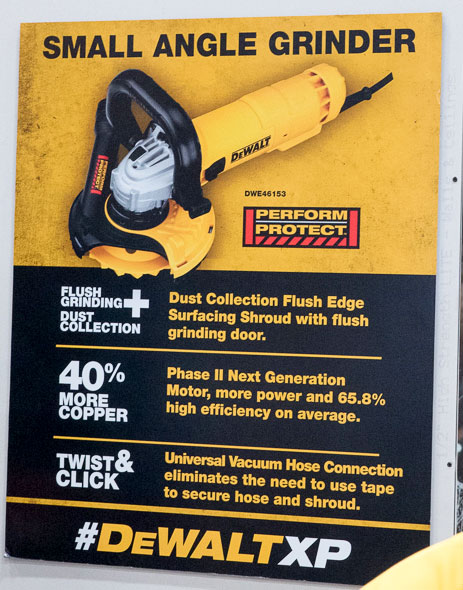 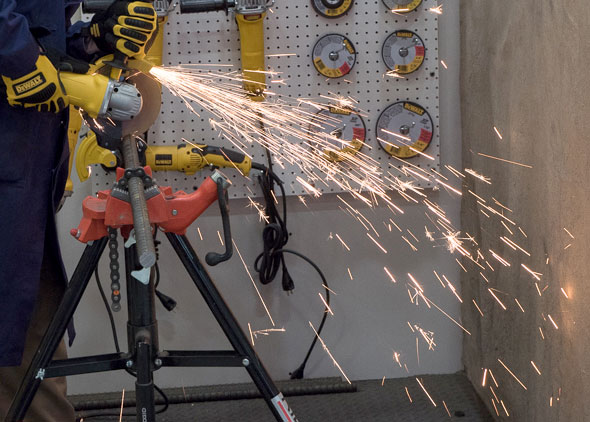 A Dewalt product manager wanted to show how much better their new cut-off wheels are, compared to leading 3M product. We were pretty tired at that point, and the group was moved to the next station (drill-building!) while he was still making cut after cut with the first wheel.

But everyone enjoyed the sparks.

The takeaway is that there are new higher-performing cut-off wheels and consumable grinder accessories coming out.

Oh hey – is that  Ridgid pipe vise? It’s surprising that Dewalt or another Stanley Black & Decker brand hasn’t made one yet. Nor has Milwaukee, even though they’re really trying to push into the plumbing tools market. I guess Ridgid is just too big of a name to compete against. That, and how many ways are there to innovate in the pipe tripod vise market?

This rounds up the last of my new Dewalt tool preview coverage. Next up, I’ll be previewing and reviewing those that are of highest reader and personal interest. That’s why I keep asking about which tools you are most excited about.

Also, if you can’t decide about which tool you’re most excited about, let’s talk about the kind of tools you’d like to see Dewalt come out with in the future.

In the corded power tool, nailer, and accessory areas, I’d like to see a cordless pin nailer (12V Max?), and a benchtop drill press. C’mon, will someone PLEASE come out with a high quality 10″ or 12″ benchtop drill press already? Bosch – you’ve already got one; please bring it to the USA already!