I really like the premium retractable utility knife, as it has a nice weight, the over-molding feels good in my hand, and the curved non-folding design gives it more leverage for making deeper cuts. For instance, it was easier for me to trim door shims in one pass than with the previous folding knife I was using.

Stuart’s Note: This knife was one of my “top 5 hottest new tools” from Dewalt’s 2016 media event, and has been favorite everyday utility knife (tied with this Milwaukee) for a while now.

After changing the blade a few times, I noticed pushing the blade release lever didn’t always release the blade. I didn’t think much about it, I’d just retract and extend the blade and it would work. Then a few days ago it stopped working altogether.

These aren’t expensive knives, but they sure cost a lot more than simpler utility knives that you can buy for a couple of bucks. The extra cost is because of the more ergonomic design and the tool-less blade change mechanism. If the tool-less blade change doesn’t work though, this knife is almost useless in the field, because it requires pliers to remove the carabiner clip and a Torx screwdriver to open.

While I was taking the knife apart to change the blade, I figured I’d get to the bottom of the faulty blade changing mechanism. But first let’s take a moment to understand how it works.

Step 1: First you fully extend the blade, then you press down on lever 1, shown above.

Step 2: This is a first class lever, so when you press on the outside part, the opposite end inside the knife pushes up (the photo is upside down).

Step 3: If and only if the blade is fully extended, the end of lever 1 pushes up against the end of the second class lever 2 shown above.

Step 4: Pushing up on lever 2 releases the blade lock, allowing you to pull the blade out and replace it with a fresh one.

At this point I’d like to note that I think it’s a pretty cool design to use the same spring for both the blade release lever and the blade retraction lever. 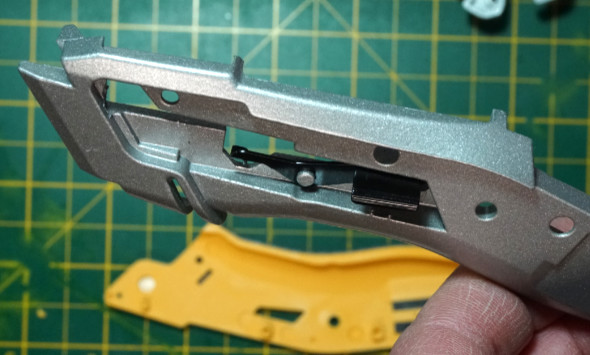 What I found is that the lever 1 can slip off the fulcrum, which causes it to miss the contact point on lever 2. The fulcrum isn’t mushroomed to keep the lever on, and it’s too short to butt up against the plastic, so there’s a gap where the lever can fall off the fulcrum.

The blade can’t be released except by taking the knife apart. Sometimes if I wiggle lever 1 around just right, I can get it back on the fulcrum and get it to hit lever 2 correctly, but at this point it’s easier to take the knife apart.

If you look at the second knife — the metal retractable utility knife — the blade change mechanism works the same way as the first knife, but you’ll notice above that there’s a retaining mechanism to stop lever 1 from coming off the fulcrum.

Here’s a video I put together to illustrate the problem:

I reached out to our Dewalt contact about the issue. The plant manager was alerted and they looked into the problem.

Dewalt said they would get back to us when they had more information about the problem, but wanted us to reassure ToolGuyd readers that if they have any issues with this knife or other Dewalt hand tools:

DEWALT hand tools have a limited lifetime warranty and more information about warranty can be found here.

After contacting Dewalt, I started talking to Stuart. He had the same knife, but had never had any issue with the blade change mechanism.

I tried several times to explain what the problem was with my knife — only he couldn’t replicate it with his knife. After quite a bit of back and forth, he reluctantly decided to break open his knife. When he did he found this: 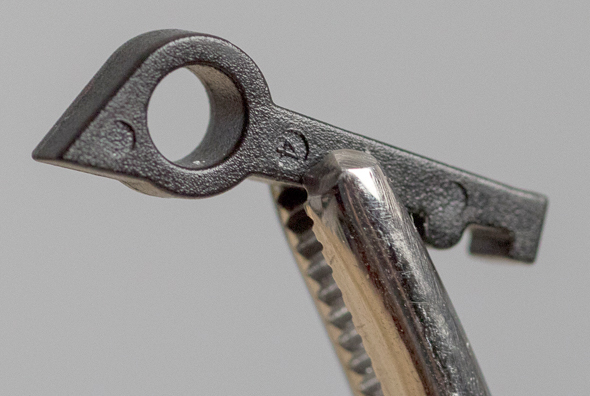 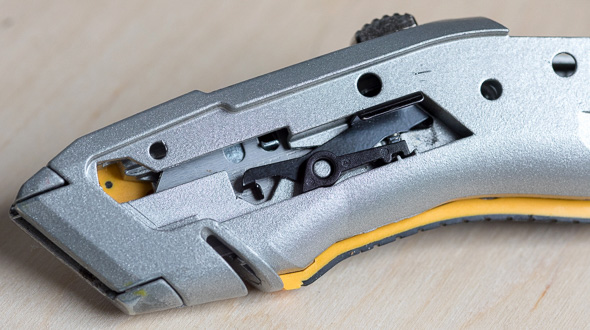 There’s no way I simply lost the piece, for some reason my knife was assembled without that piece.

When we told Dewalt about the issue, they said:

The issue Ben experienced was contained and the issue has been addressed with our teams/manufacturing facilities.

They didn’t go any further detail.

Also they’re going to ship Stuart and I some new knives. 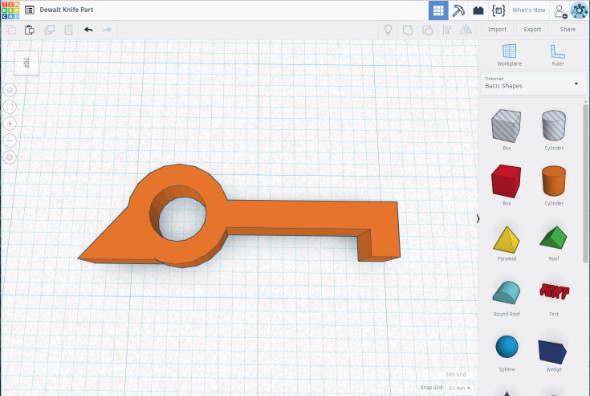 Even though Dewalt is sending me a new knife, I got to thinking — this is a perfectly good knife, I bet I can whip up a similar plastic part in a few minutes with my 3D printer.

So I measured the critical dimensions, verified the width of the part with Stuart, and created a model in Tinkercad. I used Tinkercad because it’s fast and easy to use for simple shapes.

It may not look identical to the original part, but it performs the same functions: retain the blade change lever and keep the small spring in place. 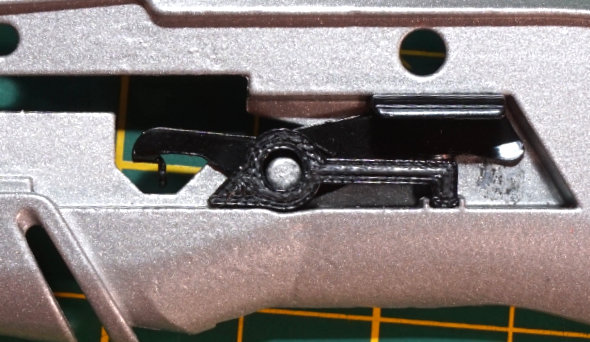 Above you can see the second attempt at a printed part in the knife. I re-assembled the knife and it works exactly like it should. The blade changing lever works every time.

All in all I spent about 20 minutes making the part: 15 minutes designing it and the rest was printing time for the first and second revision parts.

I wasn’t originally going to put a purchase link in this post, but since Dewalt says the issue was contained, I don’t see any reason why I can’t recommend this knife. Both Stuart and I like it.

You can find the knife at Home Depot for $15.

I was really concerned by the problems Ben was having with his knife. From the way he was describing the issue, it sounded like it could have either been a design flaw, or a defect that appears with use, time, or environmental factors, such as dropping it a certain way.

Would my much-loved knife fail in the same way?!

Ben described several movements that the mechanism on his knife would do, and I couldn’t get my knife to do any of the same things. My knife, purchased or received as a test sample when it first came out, was marked 2015 on the inside. But so was his, and he recently bought it. (Hmm, was that a production date or injection mold tooling ID?)

With the knife disassembled, I still couldn’t quite replicate the issue or even the lever-action slop that Ben had been experiencing. I could see there wasn’t any space between my lever and the inside of the knife’s plastic exterior. I thought it was part of the lever, but couldn’t be sure. So I sacrificed my knife and broke the housing off.

Comparing images, the truth came out. No product line is flawless. I don’t know what happened, but for whatever reason, one little piece was left out of Ben’s knife. It does happen. Maybe it was a fluke occurrence, a small batch was affected before the issue was caught and corrected, or a simple human error during assembly.

I’m out my everyday utility knife until Dewalt’s replacement comes in, but I am glad we got to the bottom of things.

Why You Should Buy a Marking Knife