ToolGuyd > New Tools > Dewalt Tough System Organizer
If you buy something through our links, ToolGuyd might earn an affiliate commission. 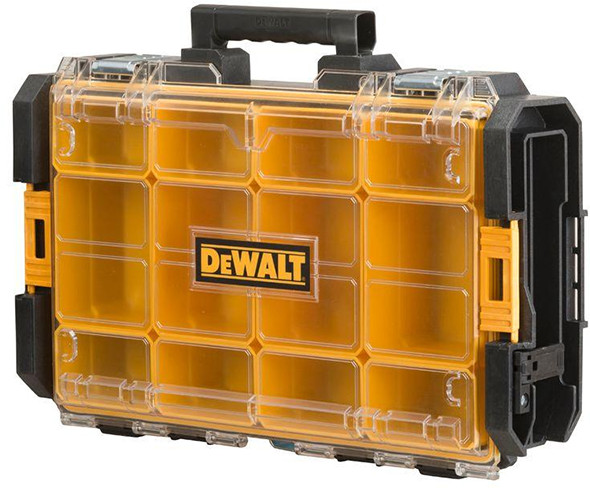 I’m a big fan of Dewalt ToughSystem tool boxes – check out my review of the smaller one, which pretty much applies to all of the sizes. Here’s a look back at our preview when they first came out, and here’s another review where I compare the ToughSystem boxes to Bosch L-Boxxes and Festool Systainers. Here’s a more focused ToughSystem vs. L-Boxxes comparison.

I love the blog, thanks! I was out trying to find the Ridgid stacking baskets, and came across this.

Hadn’t seen it here so figured you might be interested. the best part, the label showed a tough system open top tote “coming soon”.

J.Cayce also wrote in with a tip about the new ToughSystem organizer find – thank you!!

Back when Dewalt and Stanley came out with their new shallow and deep stacking organizers, I asked their Israeli product manager about whether we’ll see stacking organizers that attach to their TStak or ToughSystem lineups. I was told NO. After all, the Tstak system launched with some organizational components, and the small ToughSystem comes with removable bins.

But then, a few months later, Dewalt came out with a new Tstak organizer tool box.

Until Pat’s email, I had long ago given up hope that Dewalt would come out with a similar ToughSystem organizer.

The organizer also has a clear lid, so that you can see its contents without having to open the box.

Some features seem to have been sacrificed in order to maximize space for the internal compartment, such as a top handle, side handles, and a recess for the front handle. The handle does fold down, and looks to rest flush alongside the front of the box, and so it doesn’t protrude out too much.

Am I the only one that thinks this new ToughSystem organizer is a direct response to Milwaukee’s new organizer? The Milwaukee organizer is fantastic, and despite my long-time affinity for Stanley and Dewalt plastic tool storage and organizing products, I’m liking Milwaukee’s even better.

For a standalone organizer, the Milwaukee offers the same bin count in a smaller and more portable package. But if you’re looking for an organizer that’s part of a modular tool storage system, Dewalt ToughSystem has the edge. I suppose the Tstak organizer should also be considered, but I’ve never been a big fan of the system, aside for the budget pricing.

I think the new ToughSystem organizer looks quite appealing, and hope that Dewalt also releases a version with pick-and-pluck foam.

With this organizer, you give up a couple of convenient features, such as side handles and a top handle, and the front handle looks to poke out a little bit, but it’s an impressive accomplishment for Dewalt to have maximized the internal compartment space to such extent.