ToolGuyd > New Tools > New Dewalt ToughSystem Tool Tote
If you buy something through our links, ToolGuyd might earn an affiliate commission. 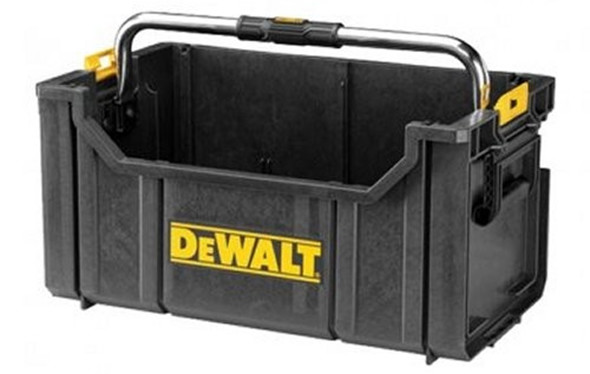 Earlier this month, thanks to a tip from Pat, we wrote about the new Dewalt ToughSystem organizer that’s soon coming out. Pat also mentioned having seen that a new tool tote was coming out, but I couldn’t dig up any info or imagery of the tote.

Pat wrote in again today and shared more information and an image of the new Dewalt ToughSystem tool tote. Although the tote looks simply designed, I can’t help but think about how much I could use something like this!

The new ToughSystem tote has a large centered carrying handle, and two side handles. It can be connected to other ToughSystem tool boxes, both on the top and the bottom. That means that this need not be your bottommost or topmost ToughSystem case.

It offers a single wide open storage compartment that looks inviting for all the sorts of tools and supplies that you might have trouble fitting into a lidded tool box. Dewalt gave it a load rating of 20 kg, or about 44 lbs.

If, or probably when, this is released in the USA, I would expect for the price to be around $45. Since it doesn’t need a top lid, weather sealing, or metal latches, it should be a little less expensive than the large ToughSystem case. Or at least that’s what I’m hoping and predicting.

In case you missed it, here’s more of my Dewalt ToughSystem tool box coverage: 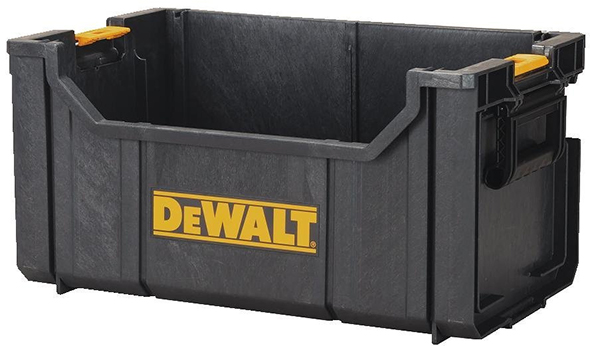 I’d also use another for things like extension cords or larger cordless tools that are tough to wrestle into Dewalt’s large ToughSystem case. The extra large ToughSystem tool box could fit a lot more than the large one, but it’s also a lot larger and bulkier to carry around.

Although I think we might see a $45 price tag, I’m hoping to see this near the $35 point. This is all wild guessing, but I don’t think we’ll realistically see it sell for much less than that.

Despite my initial “I want one of these” feelings, I can’t really visualize how this would be used with other ToughSystem tool boxes. It could be stacked together with a small ToughSystem case or maybe the new clear lidded small parts organizer, but that’s about it. Have you ever carried two fully-loaded large ToughSystem tool boxes? They’re awkward if not heavy to tote around.

I could envision lots of ways to use this new ToughSystem tote, but for most if not all the ways I imagine it, the tool tote would be used by itself. Or maybe a short stack of ToughSystem cases is carried in one hand, and this in the other.

It seems to me that you could slide this onto Dewalt’s carrier rails, just like you could any other ToughSystem tool box. This functionality is typically built into the side handles.

Could you see yourself using this as part of a ToughSystem setup, or by itself as a standalone open-topped tool tote?