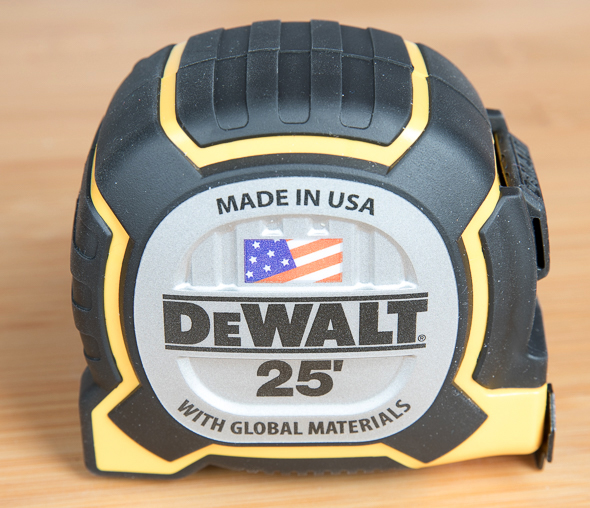 I briefly reviewed the new Dewalt XP tape measure, DWHT36225, a couple of weeks ago. I have used it a bit more, and although much of that has been light use, it’s been enough to solidify my opinion of this new tape.

If you haven’t already read it, check out my “first look” review. I’ll include another link at the end of the post.

To summarize, this new Dewalt XP tape measure is designed to be tougher in every way – its case, blade coating, and hook construction – and it has a new dual spring retraction system. 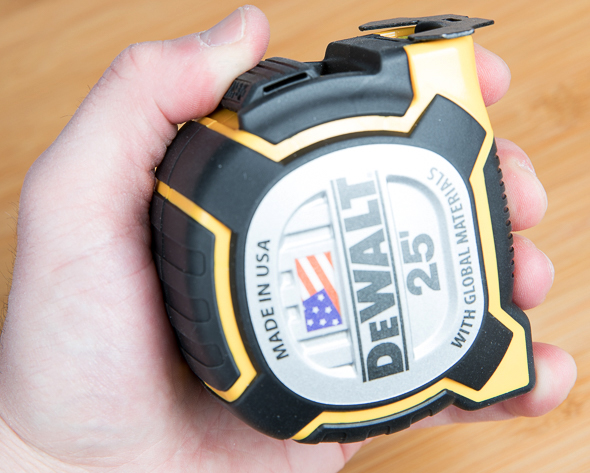 Despite its size, which I would describe as being relatively average for a premium 25-foot tape measure, it’s not yet too bulky for my medium-sized hands.

I’m still trying to develop a better gripping technique. In the photo just above, my left hand is shown gripping the tape measure case. I’m a righty, but the visualization is almost the same.

I tend to palm the top of tape measures, with my thumb forward and first 3 fingers gripping the bottom. My pinky tends to find itself perched at the lowest point of the back.

I think it’s a compensation habit I developed after using too many tape measures with stiff locks, and it gives me more leverage.

But you don’t want your pinky finger at the rear of the tape. Dewalt designed their XP tape measure to have a strong spring retraction. After repeated usage of the tape, the recoil becomes tiring.

Maybe part of how I grip 25′ tapes is due to the size of my hands (I wear size 8.5-9 gloves). But with smaller 16′ tapes, my pinky also gravitates to the rear, as there’s not enough space at the bottom.

I’ve never had to analyze my tape measure grip before the Dewalt XP tape measure came along. I’ve found that some tapes I like to use, others I don’t, but had attributed this to sliding lock button preferences.

What I’m trying to say is this – I find the XP tape measure to be a little uncomfortable with extended use, but I’m not sure if that’s my fault, the tape’s fault, or both. I figure it’s 50% due to the higher blade retraction recoil, and 50% due to the way I’ve become accustomed to holding tape measures.

Maybe this tape just isn’t for me. 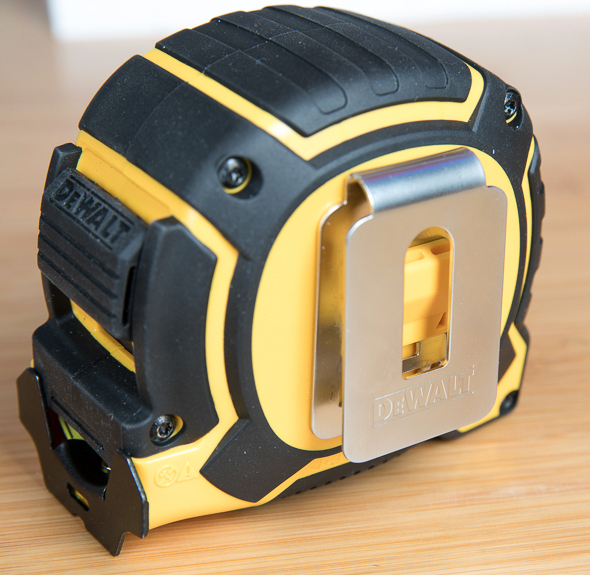 I didn’t know what the cushiony lock button was for until I read Dewalt’s press release. I thought it was for comfort. It’s for drop protection, presumably with the two very firm rubbery rails at both sides of the button.

Do you see that little warning message, right near the hook? It seems to be saying “don’t unscrew these screws to open the case!” If you’ve ever opened a tape measure or other coil-spring device before, you’ll know what happens if you do – the whole thing will pop out and unravel, and you’ll never be able to get it back together again. 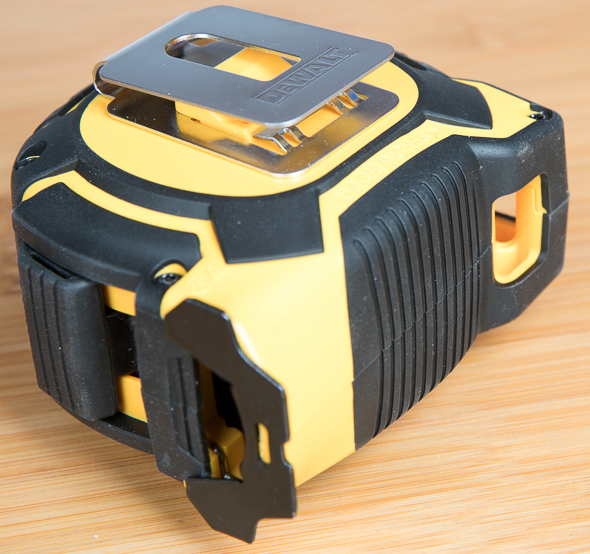 The grip material is nice.

The lanyard loop also has an overmolded grip layer. The shape of the lanyard loop helps to support the tape measure on horizontal and vertical surfaces. You can do this with other tapes, but I feel as thought the Dewalt XP tape does it a little better. 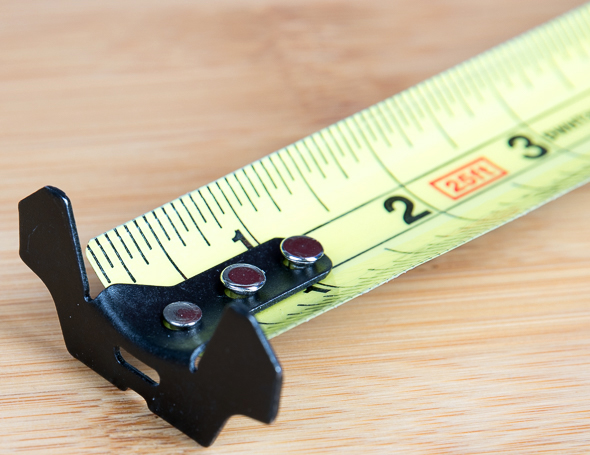 The hook is fairly large. I keep thinking it’s not, and that’s because the blade is so wide. 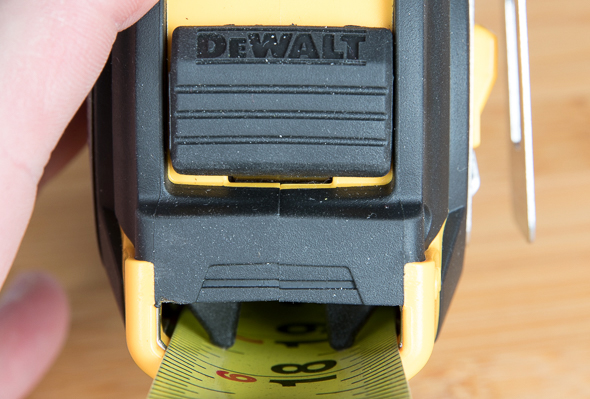 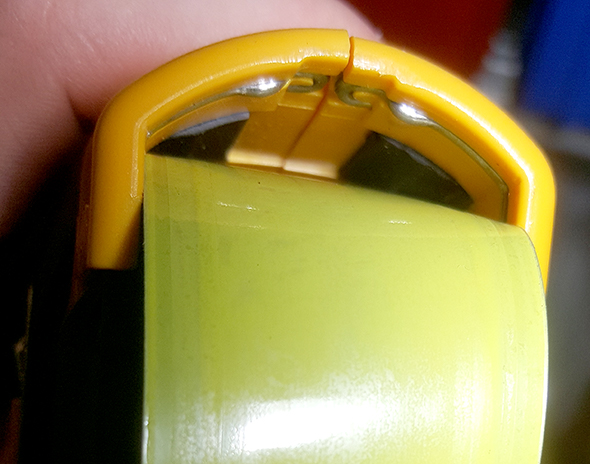 I think I’ll need to go on a tape measure dissection-spree. I have taken apart very few tape measures, but that metal reinforcement structure seems a little unusual. I’m growing ever more curious to see how this tape measure works.

You can’t lock the tape single-handled at under 9″, the reinforced coating is too thick. Before you scream “deal breaker,” as I almost did, there’s a workaround. Yes, you can use two hands, and that kind of works. What works better is to lock in the tape at 9″ inches, and push the blade into the tape measure housing until it’s at the desired measurement.

While not effortless, it’s not difficult. But pulling the tape out if you push it from greater than 9″ to under 9″, well, that’s not going to work. It takes a lot of effort, and then what happens is the blade lock loosens up. You’d have to lock it in again at 9+ inches and try again. 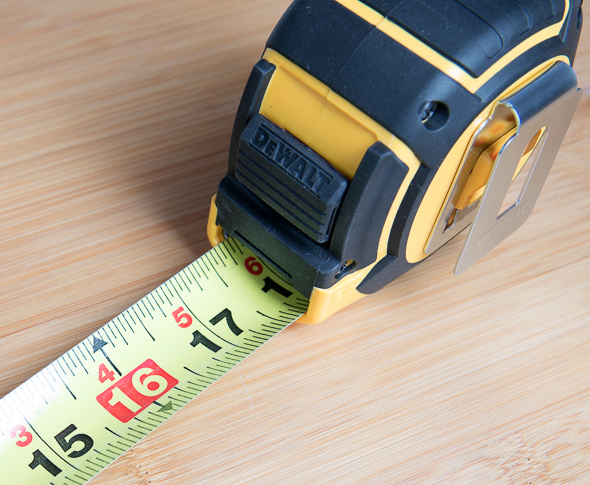 I found the blade to be easily readable. 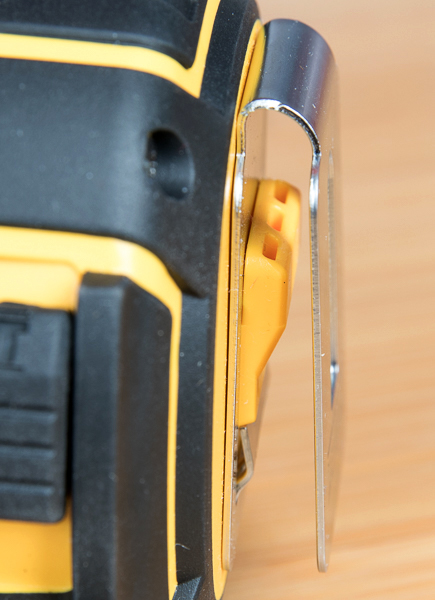 Lastly, here’s the screwless belt hook. I like it in theory, and haven’t run into problems yet. But I wonder if it sticks out a bit much.

There’s a lot to like about this new Dewalt XP tape measure. It has a toughened case, a toughened blade, a strong hook, and unique belt hook.

It is built to the MAX in every way, including the strong dual spring blade retraction system.

I have little doubt that it could very well be the toughest tape measure on the planet.

I want to like it, so, so much. But ultimately, I find the spring mechanism to be too strong. The difficulty in locking it between 0 and 9″ is another potential downside.

As a reminder, I’m not a tradesman, contractor, or other pro user who relies on their tape measure on a daily basis. Maybe the strong and fast spring is a plus for you, or maybe you have larger hands or a better grip.

This is a tape measure you should really try out in person before you buy. Or if you order online, make sure you order from a store with a great return policy. You might like it, or maybe not.

I think it’s a good tape, just not a good fit for me.

Thank you to Dewalt for providing the review sample unconditionally.