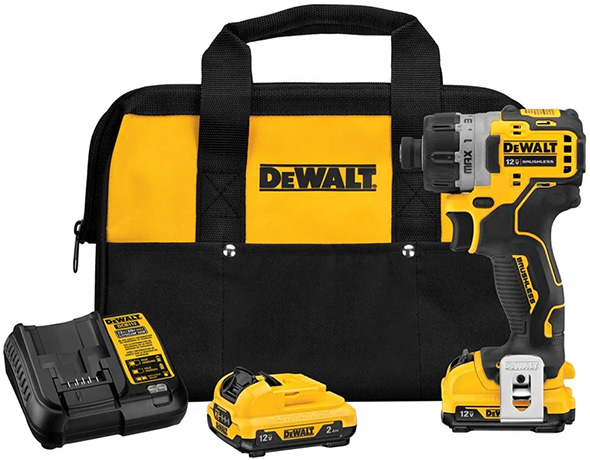 I have the full range of Dewalt Xtreme 12V Max brushless cordless power tools at my disposal (thank you, Dewalt!), and find myself using their screwdriver far more than I have with similar tools in the past.

I own a Milwaukee M12 screwdriver that I purchased as part of a Black Friday promo maybe 2 years ago, and I can’t tell why, but I tend to like this Dewalt cordless screwdriver a bit more.

The Dewalt Xtreme Subcompact 12V Max screwdriver is not quite as small or compact as the visualizations “Xtreme Subcompact” might invoke, but it’s light and as small as I’d ever want it to be. The DCF601 cordless screwdriver is comfortable to use, and when it stands upright on its battery pack, I’ll never lose it on a table or benchtop.

My daughter got some small legos stuck inside a pop-up toy that she grew out of and we were looking to donate or give away. The toy had 13 screws (or thereabout if I recall correctly), and they were quite small.

I was actually quite surprised at how much control the Dewalt Xtreme Subcompact cordless screwdriver provided me with, so that I didn’t strip out over-driver the self-threading screws.

This was a plastic toy, not a construction installation, and so something like an 18V drill/driver would have been a poor fit, leading me to use a ratcheting screwdriver, “pocket tool” type technician screwdriver, or precision screwdriver.

The screwdriver still has enough oomph for cabinetry applications and other such tasks where larger 18V or 20V Max drill/drivers or high-powered impact drivers might lack finesse and precise-enough low-end torque control.

Cordless screwdrivers are by no means an essential part of my kit, but its perfect balance of size, speed, power, comfort, and control makes it one that I’m quite fond of.

There seem to be two distinct standpoints regarding tools like this. The first is one of dismissal – “why do they even bother making a tool like this?” The second is almost completely opposite – “I love my 12V screwdriver so much, why don’t brands make this in 18V/20V Max size?”

Yes, there’s a lot of overlap when it comes to functionality. Some brands now have multi-head cordless drill/drivers that might even make standalone cordless screwdrivers obsolete, although they’re often priced at a premium with more complex designs and loose pieces to lose.

Do you really need cordless screwdrivers with 1/4″ hex chucks when cordless drills often feature the same clutch dials and comparable speed and power? No. But the screwdriver’s smaller size has its benefits.

Plus, when you’re going back and forth between drilling and driving tasks, dedicated tools will make everything easier, quicker, or both.

Well, why not just use an impact driver? One could surely do this, especially with the speed and torque settings brushless motor tech allows for. But for smaller fasteners, it’s simply not optimal. Could you imagine working the #2 or #4 screws on a plastic toy with an impact driver? Well sure, you can, but that doesn’t make it ideal.

You could use a framing hammer on finish nails, but doesn’t it work out better to use a smooth-faced 12 or 16 oz claw hammer?

Back to the Dewalt Xtreme screwdriver – it could be smaller, it could be more powerful, and it could be faster. But as it is, it’s dialed-in just right, and I haven’t found anything I could complain about yet.

If you’re on the fence or don’t have an immediate need, you can usually save some money on this kit if you wait for a seasonal coupon or promo discount.

Do you find cordless screwdrivers like this one to be a “do not need” or “must-have” as part of your work or hobbies?