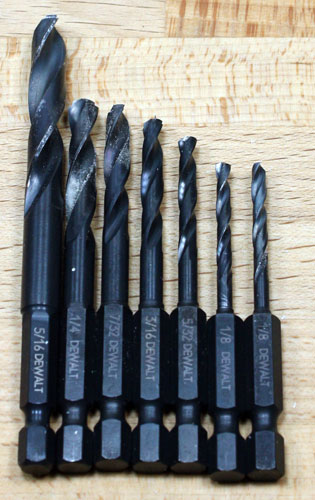 Dewalt recently released a whole slew of new Impact Ready bits and accessories, including twist drill bits and hole saws. We had the opportunity to give these new drill bits a spin, and as you will soon see in this review, we think they’re absolutely fantastic. 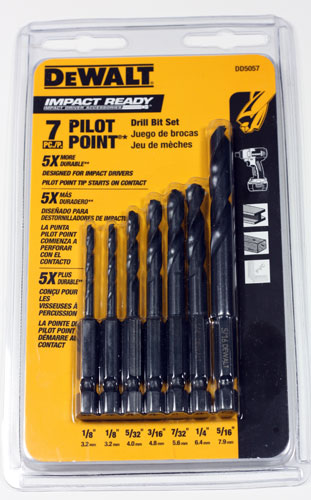 To start off, Dewalt’s new 1/4″ hex shanked drill bits are, as Impact Ready implies, intended to be used with impact drivers. We can see several advantages to using an impact driver to bore holes:

Impact drivers are becoming more and more popular at jobsites and with DIYers, and it was only a matter of time before specialized drill bits hit the market. We have seen regular hex-shanked drill bits marketed as impact drill bits, but as far as we can tell, Dewalt’s are the first bits actually designed for impact driver use. 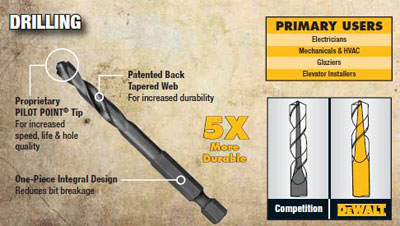 These new drill bits have several innovative features. First, these bits are of a uni-body design, which makes them much more reliable than ordinary two-piece bits. A two-piece bit is typically prone to breakage or failure right at the interface between the drill bit shank and its 1/4″ hex shank. Eliminate this weak interface, and you essentially remove these inherent risks.

Second, these drill bits are enforced by a back tapered web which should make them quite durable. In addition to this, as either a consequence or complementary feature, these Impact Ready drill bits also have relatively short cutting flutes, which should further reduce the chances of breakage.

We compared the size of Dewalt’s Impact Ready bits to jobbers length twist bits that we had readily available. Compared to those bits, Dewalt’s bits were shorter in most cases by about a quarter to a third, with the larger sized bits being even more noticeably short. The bits are still plenty long enough for most electricians, HVAC installers, other professionals users, and DIYers, but it’s still something to keep in mind.

Third, these bits feature Dewalt’s Pilot Point tip on bits 3/16″ and larger, with smaller bits instead featuring heavy-duty split point tips. We’ve used similarly featured Dewalt drill bits in the past, and are quite fond of how the Pilot Points allow us to skip the step of drilling pilot holes in certain materials.

We were thoroughly impressed with these bits and their overall construction, uni-body design, and high performance. The bits were very sharp out of the factory, and they remained sharp even after prolonged use. We were concerned that these bits would be quicker to dull due to their being designed for impact driver use, but this apparently was not the case.

These are awesome bits, and we only wish that they were more widely available. These bits can also be used in non-impact drills and drivers, and given their one-piece design, we would readily choose these bits over common two-piece hex shanked bits.

For the review, we tested these bits on several types of materials, including: soft wood, hard wood, aluminum, PVC, and medium duty steel sheets, and the bits handled them all with ease.

In short, we were quite impressed with Dewalt’s new Impact Ready drill bits. We were thrilled with every aspect of the bits, but at the same time we imagine that some people might be turned off by the bits’ shorter than normal flute lengths.

Dewalt claims that bits with Pilot Points drill burr-free round holes while competitors’ large bits would drill irregular holes without first pre-drilling pilot holes. We cannot say anything about their competitors’ bits, but the Pilot Point does provide nice results. Some of our holes are a little irregularly shaped, but that’s due to how we were holding the drill.

We definitely recommend Dewalt’s new Impact Ready drill bits, and will certainly continue using them in both impact drivers and conventional cordless drills ourselves. Although these bits are more costlier than regular bits, their reduced failure rates and added convenience help to offset this.

You can find these bits at many industrial suppliers either individually or in 5, 7, or 10 piece sets. 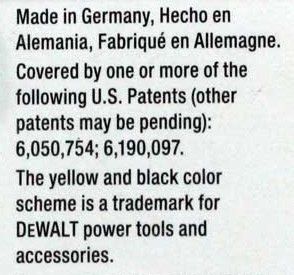 Something interesting that we noted – these bits were made in Germany.

Following is a brief clip showing three 5/16″ holes being bored into a piece of a 2×4 wood stud.

Finally, we would like to thank Dewalt for supplying us with these bits for review.