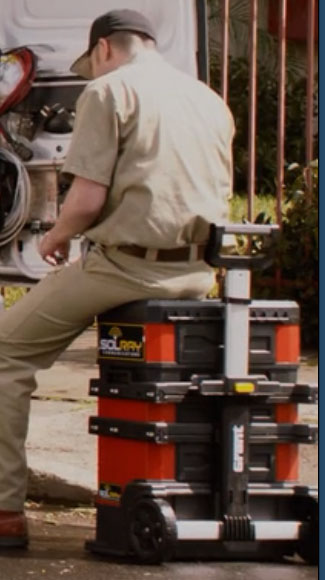 I receive “please identify this tool!” emails fairly regularly. Sometimes I’m stumped, other times the answer comes quickly. Neil recently emailed in about a toolbox he saw on Dexter. First I was stumped, but then I identified the product with ease.

I was wondering if you could identify the toolbox in this picture. I just saw on an older episode of Dexter. Please let me know if you have any idea?

I was stumped. The stickers on the side of the box were props related to the episode, and the “Grant” written on the handle didn’t offer any good leads.

I asked for additional clues.

I looked and the image on the side is the company the character worked for but on the handle it looks like it says Grant? So I am thinking it made by them? It looks interesting because it has a D handle and is telescoping and has multiple boxes.

I had been looking for a modular toolbox system, but the handle and dolly components didn’t quite look like the detach from the rest of the unit. 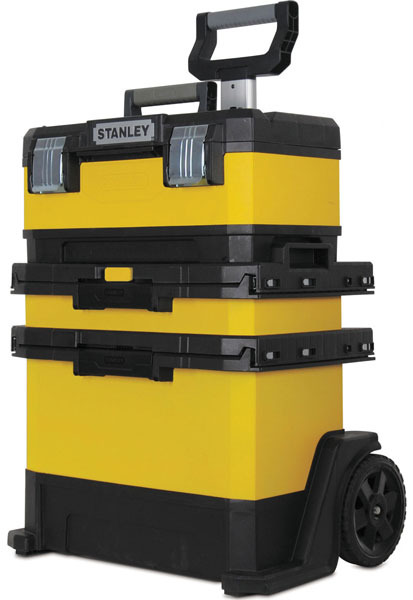 Once I realized it’s just one unit, I had the answer in about 30 seconds. Shown in the picture is a Stanley rolling multi-level workshop, such as model 020586R, that was either painted or made in red. The ones I have seen are finished in grey or yellow plastic, and I believe I have seen a metal version as well.

It was difficult to find rear images of the Stanley product, but they match up with the Dexter screen capture.

It’s always interesting to see how tools are used as props in TV shows and movies, and especially when they are transformed into unusual devices and contraptions in science fiction and futuristic scenes. In the Dexter show the reader references, the tool box was just a tool box, but maybe next time it’ll be modified into something else.