ToolGuyd > Hand Tools > Layout & Measuring > Dixon Reach Long Nose Markers
If you buy something through our links, ToolGuyd might earn an affiliate commission.

Stuart previously wrote about the FastCap long nose pattern marker, but they cost $6 and are hard to find locally. I found an alternative – the Dixon Reach marker, and you can buy it at Lowes or Menards for half the price.

As you can see in the picture above, the marker has a thin tip metal tip that extends 1-3/8″ from the plastic base of the marker. This thin tip allows you to either mark inside recessed holes, or trace very close to the edge of a pattern. The marker uses a special ink that Dixon claims can successfully mark most surfaces.

The thin metal tip is stepped, rather than being straight. I’m guessing it has something to do with how far the tip material can draw the ink from the well in such a narrow tube. It might also be for strength.

It comes with a neon yellow cap that completely covers the tip, and has a closed belt loop. If you find that you strongly prefer a pocket clip, maybe you could modify the loop with a strategically placed opening.

Unlike the FastCap marker, the Dixon Reach marker doesn’t have an additional chisel point on the opposite end. 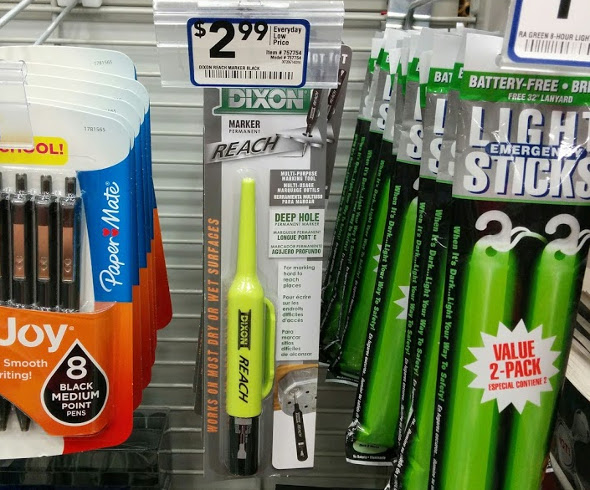 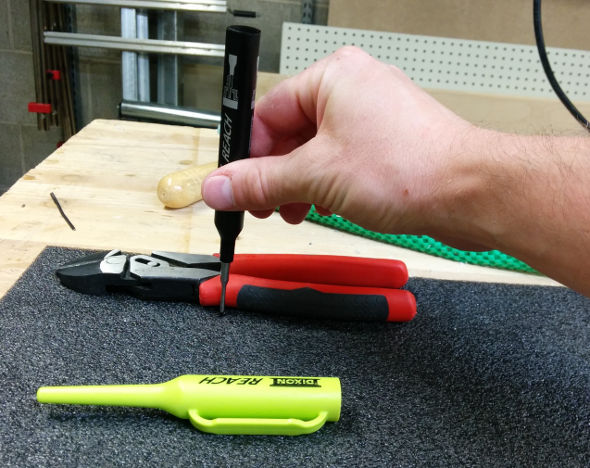 The main reason I purchased one of these markers was for outlining tools on some Kaizen foam I bought to organize my tool drawers. Wanting to get started on the project rather than waiting for a FastCap marker to ship, I lucked out and found this Dixon Reach marker at Menards.

Tracing tools with a marker like this can get a little messy, as you get ink on the bottom of the tools, but I found that the ink cleans up well with a little isopropyl alcohol.

Having the marker in my shop, I soon found myself using it to mark some holes in the bottom of screw holes that would have been too deep for a standard Sharpie or an Inkzall. If didn’t have the marker, I probably would have used a transfer punch, but that was more precision than I really needed and the marker was handy.