ToolGuyd > Hand Tools > Clamps > Project: Making a T-Track Table Top on a Budget
If you buy something through our links, ToolGuyd might earn an affiliate commission. 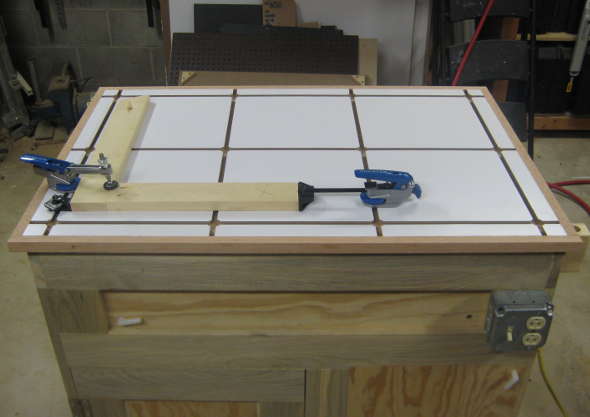 With new T-Track accessories from Rockler, like the T-Track Work Stops, the Auto-Lock push and hold down clamps, you still need some type of table to use them on. These, and other T-track accessories, work with specially shaped aluminum extrusions that are sold by Rockler and other woodworking supply companies.

You can buy single or multi-width t-track channels, which can be inlayed into an existing workbench top or surface. Rockler also sells a T-Track Table for $249, which sometimes does go on sale, but it’s still an expensive investment — especially if you’ve already dropped serious dough on the T-Track accessories.

Or, you can make your own T-track table.

After my shopping spree, when I purchased several of the new Auto-Lock clamps, I decided that I would build my own T-track table, rather than sink more money into a pre-made T-track table, and I would do it on the cheap.

Rather than make a stand alone table, I would make a T-track table surface as an auxiliary top for the downdraft table I built a few years ago.

Aluminum T-track extrusions are inexpensive, if you just need one or two parallel channels. But the costs start mounting for a table-top project where you need many channels, pre-made or custom-cut intersections, and a large router bit for installation. 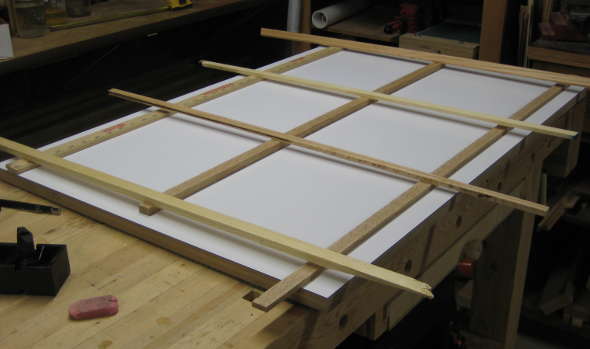 After playing with the Rockler T-track table in the store, I had a few improvements in mind. First, on the Rockler table, you have to start the T-track accessories at the edge, which is inconvenient and not very visually appealing. Second, I felt the Rockler table needed more T-slots spaced closer together. As it’s designed, you’d need to use blocks to span the gaps between the tracks in many circumstances.

To solve the issue of starting the accessories on the edge, I decided to cap the edge of the table with edge banding and create circular junction where every T-slot intersects. That way you don’t have to move more that a foot to start an accessory.

Since my down draft table uses 2′ x 3′ tops, I cut a 2′ x 4′, 3/4″ MDF handy panel to fit. Then I applied some white laminate, which gives the table top a reduced friction and slower-wearing work surface. I won’t go into details about laminating MDF here, there’s plenty of tutorials you can find to learn how to do that.

To visualize where I was going to cut the T-slots, I laid a bunch of 3/4″ wide scraps over the table. Once I had a layout that I liked, I ended up leaving 1-1/2″ of white space around the border and spacing the four longer slots 10-1/4″ apart. The four shorter slots, I spaced 11″ apart. 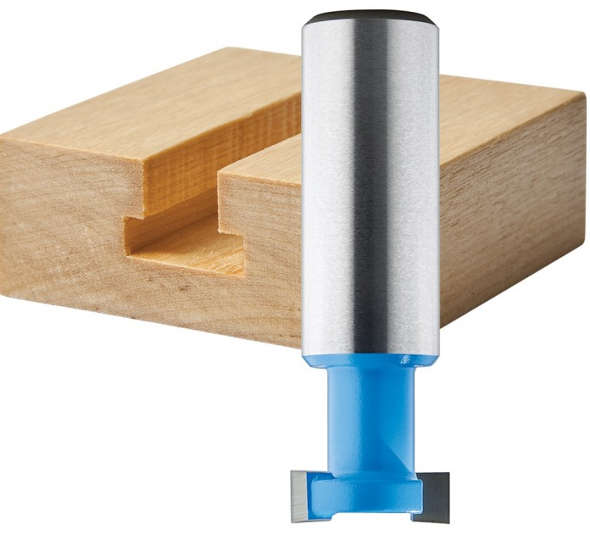 Once I had the layout down, I started cutting the T-slots. Since the T-slot bit only has cutters on the wings, you need to make a 3/8″ groove first, plus you wouldn’t want to cut the whole slot at once anyway. To make the groove I usually use a 3/8″ router bit and make the groove in a few passes, alternatively you could use a dado blade on a table saw. 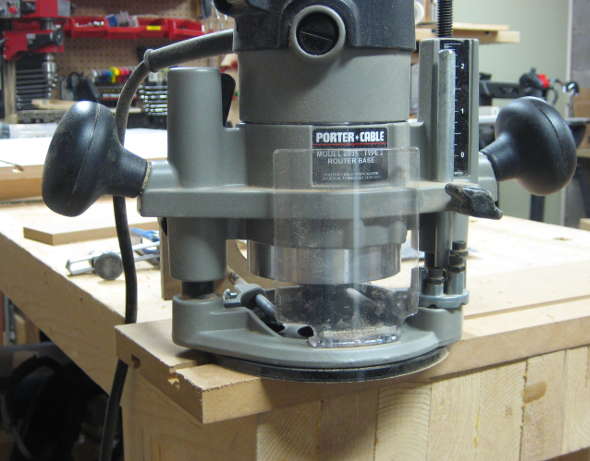 To set the depth of the bit, I used a piece of scrap into which I had previously routed a T-slot. If you’ve never used a T-slot bit before, you’ll probably want to experiment first on scrap material to find the right depth.

When cutting the groove, I used a clamping straight-edge and router jig consisting of two rods and a piece of scrap that make the router ride the straightedge like a rail. Then I ran the one shallow pass before I set the router for full depth and ran the second pass. 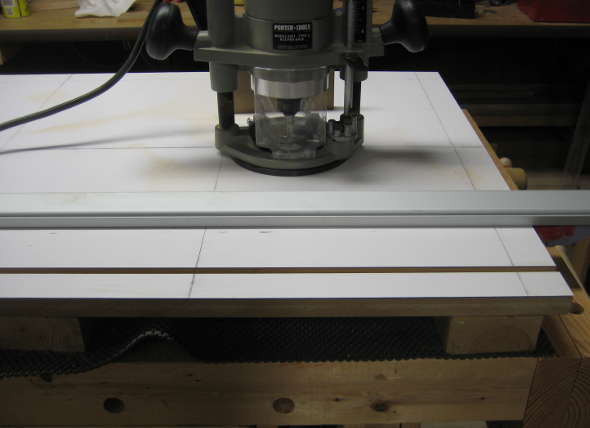 Leaving the straight edge clamped in place, I changed the bit to the T-slot bit and set the depth using the same piece of scrap as before. I then cut the rest of the T-slot in a single pass. Yes having to change bits twice every time I routed a new T-slot was a little inefficient, but my cheap Harbor Freight clamping straightedge is very fussy to set up and I was afraid I’d never get it lined up exactly the same way twice. 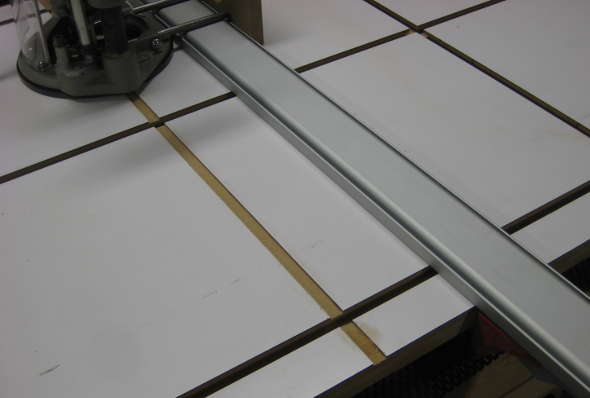 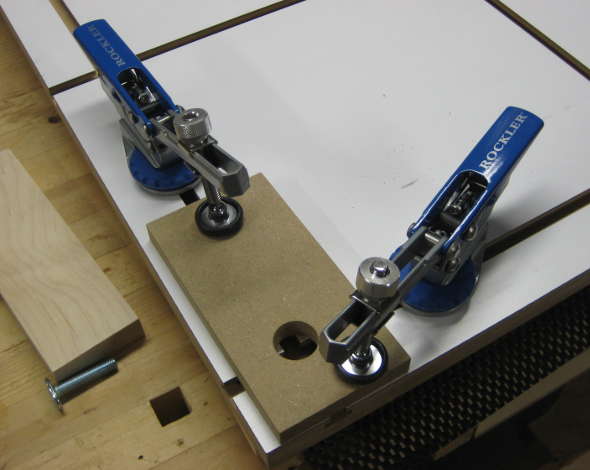 In order to make each intersection a place where I could start T-track accessories, I needed to find a drill bit that would make a hole large enough for the T-bolt to pass through. I found that a 7/8″ Forstner bit worked nicely. Since I didn’t have any place to start the bit, I drilled through a piece of scrap with the Forstner bit to use as a guide.

I centered the guide over each intersection and clamped it in place using the Rockler Auto-Lock hold-downs — how often do you get a project assisting in its own construction! Then I slowly started the Forstner bit in the guide until it touched the table top and pulled back the drill trigger until the corners were gone. Sometimes the hole wasn’t perfectly clean and I had to remove some debris with a chisel.

To cover and protect the open T-track ends and stiffen the top, I ripped some 3/4″ red oak into 13/16″ strips (remember the thickness of the laminate), then I applied them to the edges of the top. Since this was a shop fixture, rather than bothering to miter the corners, I just used butt joints. 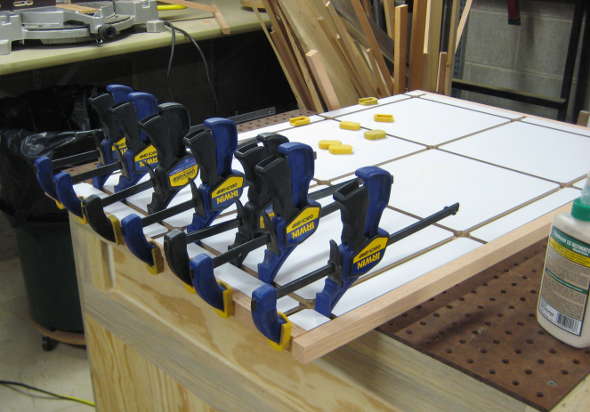 Again the table helped with its own construction, I was able to use the T-slots in conjunction with come quick clamps to hold the banding in place while the glue dried.

Assuming you already had all the power tools, the supplies for this project break down as follows:

Starting from scratch, it should cost you about $70 to build a custom T-track table like this one, but if you already have a T-slot bit and/or a shop full of materials it’ll probably cost you considerably less.

You can find similar bits from other brands, but I’ve had good experiences with this one from Rockler.

After playing with the table for a while, I learned I should have cut more T-slots. In many situations, the slots are still too far apart to be really useful for clamping without resorting to some intermediate blocks. I’m sure this can be mitigated with some thought and smart placement of the materials on the table, but the whole point of a system like this is speed. There’s always the option to add more routed T-tracks down the line, rather than building a whole new table.

Another thing I noticed was the Rockler auto-locking clamps and hold downs have very short T-bolts, if you make the T-slots too deep, the T-bolts won’t reach the tightening wheels on the clamps. Obviously this is less of an issue for the aluminum extruded T-tracks because they can be made shallower. Remember, Rockler’s T-track accessories are likely optimized for their T-track channels.

When I first proposed this project to Stuart, he was a little wary that routed T-slots wouldn’t be strong enough to stand up the forces the clamps would apply to the table. So far, I haven’t damaged one T-slot I’ve cut in MDF. If you look at a 5/16″ T-bolt, it provides over 1/2″ of grip on both sides of the track.

Plus, many clamping jobs require more sideways force than downwards force. Once tightened down, the sideways force is provided by the friction between the surface and the base of the clamp, at least with the Rockler Auto-locking clamps. Yes there are times when you need a lot of downward force, but you can save your table by using more clamps with less force.

While the routed T-slots aren’t as strong as the extruded aluminum T-track, the T-track can have its own problems (besides the obvious expense):

First, they might require that a deeper groove be cut or routed into the work surface for installation, and so you might meed a thicker top. I’ve found that, for some materials like MDF, they don’t provide enough mounting holes. I’ve had aluminum T-tracks pop out of their grooves while clamping things down, although this is easily remedied with a drill and countersinking bit. Also, I find it hard to install long stretches of aluminum T-tracks completely flush with the work surface, no matter how careful I am.

The T-Track table top only took me a few hours in the shop to build, and it cost me less than 20% of what Rockler’s version did. All in all I’m pretty happy with it.