ToolGuyd > Editorial > Do You Use the Strobe Mode on Your Flashlight?
If you buy something through our links, ToolGuyd might earn an affiliate commission. 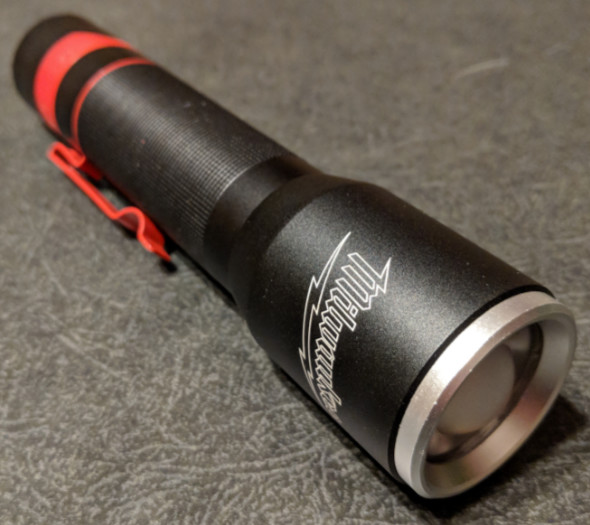 I’ve been looking at more flashlights this past year, and am even testing a few. One thing they’ve all had in common was a flashing or strobe mode. Previously, the closest thing I’d ever had to this was a flashlight with a separate momentary-on button — presumably for signaling — so this was a new feature to me.

I can say without a doubt that I absolutely hate this function. It seems ludicrous to me that I have to cycle through a strobing mode to get from one mode to the next.

Although, if you are going to include a strobe mode, one “flashlight” I’ve tested actually gets it right. Milwaukee’s M18 Search Light, reviewed here, has a separate mode button that cycles through flood, spot, and combined modes. Only if you hold the button down for a long press does it go into strobe mode.

The flashlight I’m currently testing, Milwaukee’s USB rechargeable 700 Lumen flashlight, gets it spectacularly wrong. The on/off button is the same button you use to switch between high, low, and strobe mode.

To turn it on and off you fully depress the button, and to change modes you depress the button halfway. The problem is that I’ve been using it outside in the cold, cold Minnesota winter. While wearing heavy mittens, I have a hard time distinguishing between a half and full press. So I end up putting the flashlight into strobe mode more often than I’d like (which is NEVER).

I did some searching to try and figure out why so many flashlights include a strobe mode. One application that I read about involves using a strobe light mode for tactical purposes: evidently a flashing light is more confusing to a perpetrator than a solid beam. It throws them off guard, giving you the advantage. I can definitely attest to that. Every time I accidentally enter strobe mode it screws up my vision for a few seconds until I quickly change modes back again.

A flashing light is also said to make pedestrians more visible to passing motorists while walking on the side of the road in the dark. I might agree with this, if the strobe modes weren’t so bright. Have you ever actually tried this? It’s disorienting — the last thing you want while walking around several thousand pound vehicles.

Lastly, a flashlight’s strobe mode can be used for signalling or location applications. This might sound reasonable, but I think the momentary on/off switch I mentioned before would be more useful, and can also even be used to send Morse code.

So my question: Am I missing something? Why would you cripple the operation of a flashlight for such edge case uses. Is there a better reason for taking a perfectly functional flashlight and make it aggravating for 99% of people who use it?

Have you ever used the strobe feature of your flashlight?