ToolGuyd > Power Tools > Cordless > The DOER Cordless Power Tool All-in-One DIYer Workshop
If you buy something through our links, ToolGuyd might earn an affiliate commission.

Shown here is the new DOER cordless power tool system, described as the most compact tool shed you’ve ever seen.

Does it look familiar? The POWER8 compact cordless power tool kit first came out a full 10 years ago in 2009. Back in 2011 there were talks of a Li-ion upgrade, and I guess that’s now where DOER comes in.

DOER is launching with a Kickstarter campaign, where it has already earned more than $500,000 in backers’ pledges. 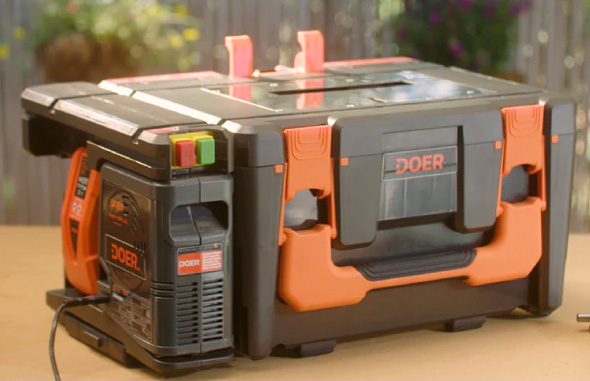 The DOER table/base unit doesn’t look much different compared to the POWER8. Their Kickstarter FAQ describes some of the engineering differences between the two systems, such as increased battery capacity, an AC/DC hybrid power source, and slight feature and spec updates to many of the individual tools.

A 4.0Ah battery, additional UniGrip power handles, and AC/DC power adapter are available at higher pledge amounts. There are basic, basic plus, standard, standard plus, and ultimate pledge/reward levels.

This is straight from the kickstarter campaign. They don’t elaborate what makes the DOER “safe” or “high-end.”

Thank you to everyone who wrote in about this!

We’ve seen modular cordless power tools before, such as from Ridgid (JobMax), Black & Decker (Matrix), and Craftsman (Bolt-On, made by Black & Decker).

Some of the “12-in-1” functions seem interesting.

Although the relationship between Power8 and DOER and its new company (Stellen) is addressed in the Kickstarter FAQ, I still don’t quite follow what happened.

We create the brand DOER. Unlike Power8, the brand goes without numerical functions for future expansion. DOER Basic kit includes 12 functions, and we will expand the DOER product lines to more handheld powertools in future. With such an ambitious plan, we need your support!

Some of the tools and functions seem convenient, such as the ability to turn the cordless drill into a mini drill press, the circular saw into a mini table saw, and the jig saw into a mini scroll saw. Use a sanding pad adapter, and the drill can be used as a benchtop sander.

But, realistically, how good do these tools work? For instance, what can you cut on a table saw so small?

Chris Elsworthy, inventor of the Power8 workshop product, doesn’t seem to be affiliated with Stellen or the DOER cordless power tool system at all. Why? Also, looking at Elsworthy’s twitter feed, a Li-ion version of the Power8, called the Power8 Pro, was still on the market early this year. Here’s the Amazon UK listing.

If the Power8 wasn’t compelling enough for continued development, what’s the guarantee that new tools or accessories will come to the DOER?

On the Kickstarter page, they say that the basic kit has an early bird price of $499, a (presumably) regular pledge price of $539, and an eventual retail price of $799. They say that the Standard Plus kit, with an extra UniGrip handle, 4.0Ah battery, and AC/DC adapter will retail for $939.

I just don’t see how this would be better than a traditional cordless power tool combo kit. The DOER seems interesting in theory, but in practice there might be headache-causing limitations.