ToolGuyd > Awesome & Cool > Dremel 3D Printer
If you buy something through our links, ToolGuyd might earn an affiliate commission. 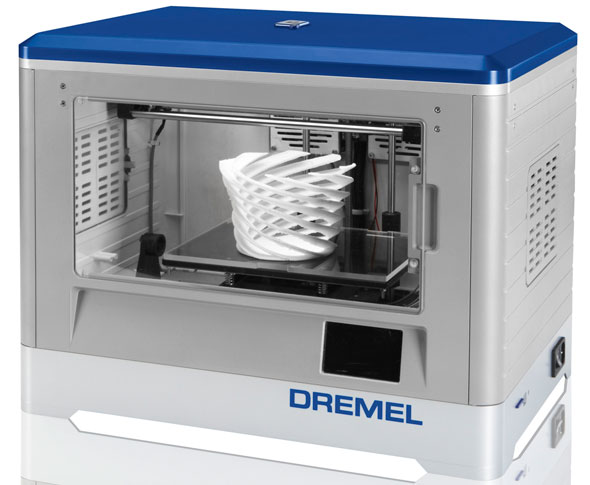 Dremel has come out with a new 3D printer. Yes, that’s right, a 3D printer! They’re calling it the Dremel 3D Idea Builder (model 3D20), and will be supporting the new printer with their own brand of plastic filament, and a community site that features downloadable projects.

As an aside, I would have thought that Dremel would have come out with an all-in-one desktop CNC machining package instead of a printer. Dremel rotary tools are often used as the machining spindles in smaller desktop CNC packages and DIY designs, and so a CNC router wouldn’t have been a far reach for Dremel. Well, at least not as far a reach as a 3D printer.

So what’s special about the Dremel 3D Idea Builder? For one, it’s the first 3D printer to be released by a major power tool brand. As with most Dremel products, the new 3D printer will likely be aimed at hobbyists and DIYers.

How Does it Work?

Similar to other filament extruder-based printers, the new Dremel 3D printer works by laying down layer upon layer of near-molten plastic.

Plastic filament is drawn into the extruder where it is heated until it’s soft and flowable. Then, it is pushed through the extruding nozzle where it slims down in size until it emerges as thin as the average human hair.

The extruder moves along X and Y axes to lay down a two dimensional layer. Once the layer is done, the Z axis raises the extruder every so slightly before it lays down the next layer. Several dozen, hundred, or thousands of layers later, and the result is a three dimensional object. 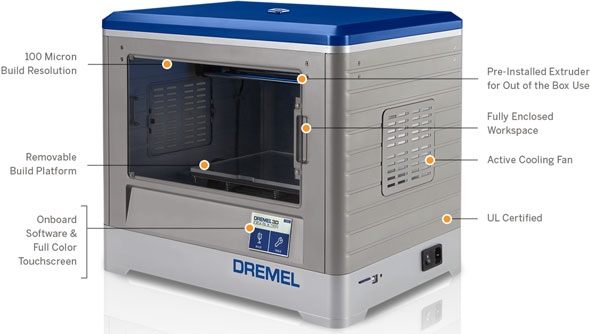 There are a number of aspects I find interesting and appealing about Dremel’s Idea Builder 3D printer. Here’s a look at the Dremel 3D20 major features and specs:

The Dremel Idea Builder is self-enclosed

This makes the Dremel printer a little easier to fit into homes and offices, at least in my mind. The enclosed designed, coupled with the active cooling fan, should help keep print area temperatures constant. A stabilized temperature and build environment translates into more consistent prints.

Not only does the enclosure promote better print quality, it should help contain odors. The Dremel 3D printer is designed to work with PLA plastic filament, which gives off a sweetish smell when heated, but who likes to breath in plastic fumes?

It is unclear as to whether the Dremel Idea Builder is air-tight, and if not, maybe one could simply cover the vents with activated charcoal or another material to serve as a vapor filter.

The full enclosure should also help to dampen noise a bit. I’m sure the extruder motor and stepper motors aren’t anywhere as loud as a typical power tool, but they’re bound to have that high pitched whine all small motors have. Less noise is better.

Onboard software and color touchscreeen display 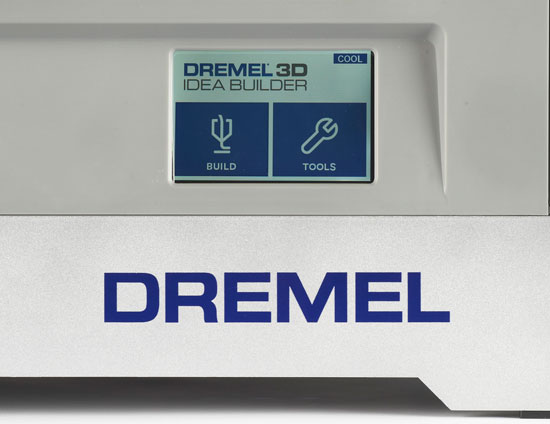 An on-board control display and built-in software will hopefully mean less of a need to tether the 3D printer to a computer.

The color display and control interface is a 3.5″ full color IPS touch screen.

Pre-installed extruder for out-of-the-box use 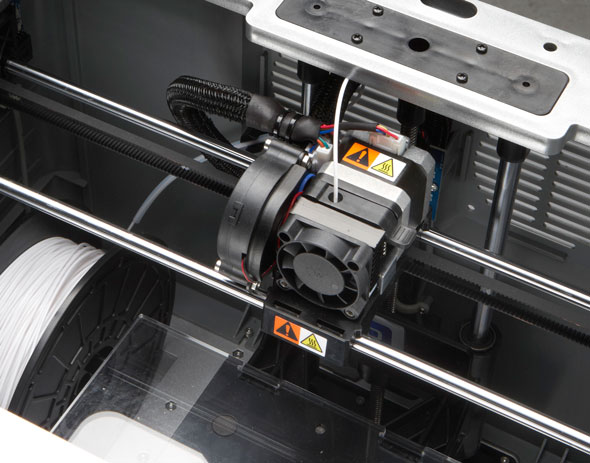 To me, “out of the box” also suggests pre-calibration, which should make this a truly consumer-friendly printer. A lot of other 3D printers, even consumer models, require a bit of setup and then troubleshooting. Hopefully I’m not wrong in my assumption.

From the looks of it, the z-platform is raised and lowered with a lead screw, and the x- and y-axes are belt-driven. Each axis has two linear guides, and presumably ball bearing slides.

This is on-par with the latest flagship Makerbot printers. Dremel says the print resolution is “best in class,” and it kind of is. 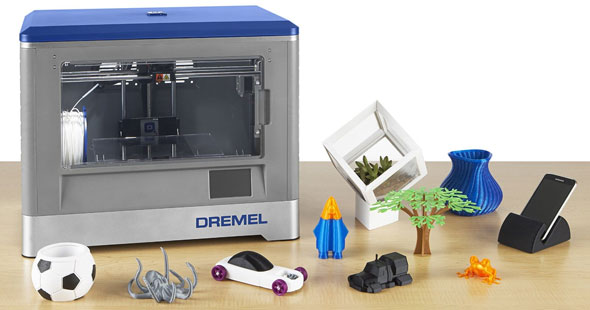 The extruder works with 1.75 mm PLA plastic filament, which is a standard and easy-to-find size. This means that you should be able to use any 1.75 mm PLA filament with this printer.

Dremel actually partnered with Autodesk, and so you can expect full support with their free 3D design and printing software options.

This seems to be a respectable size for a $999 3D printer with 100µm resolution.

The Dremel 3D printer will be sold for $999, and will be available online from Amazon and Home Depot, and in-store at select Home Depot retail locations. The printer will start shipping in November 2014.

Dremel says the 3D Idea Builder will be full-featured, easy to use, family friendly, and both community and expert supported.

Dremel is not the first consumer power tool brand to consider entering the 3D printing market. About a year ago, a business intern at Sears and Craftsman picked my brain about the matter. Even so, Dremel is the first to actually produce a physical product.

I would be lying if I said I wasn’t completely surprised to learn about the 3D20 3D Idea Builder. A 3D printer is not exactly the same as the new home sharpening station, butane torches, cordless Micro rotary tool, Ultra saw, or Forti-Flex flex-shaft tool that Dremel came out with in the past year. For Dremel to have come out with a 3D printer – and a good-looking one at that – means they were at work on this for a while, or partnered with a company that already has a strong foothold in the 3D printing arena.

Update: It looks like Dremel partnered with Flashforge to design and build the 3D printer. The Dremel 3D20 3D Idea Builder looks like a single-extruder version of the Flashforge Dreamer printer, which is $1300 via Amazon.

In light of the 3D printer announcement, it seems possible that there might be plans for a Dremel CNC router or mill. Maybe we’ll see something along those lines next year, ahead of the 2015 winter holiday season.

$999 is a hefty price to pay for a home or hobby tool, but it looks like Dremel hit all the right notes. The Dremel 3D20 3D printer looks to be a finished product, and one without any noticeable compromises.

I really like the fully-enclosed nature of the Dremel 3D printer, but I also like that they’re looking to build a community to support the product.

The one thing I haven’t seen any mention of is the warranty. Hopefully Dremel will fully support the product with a strong warranty, which is an area where other consumer 3D printer brands – even premium ones – have been lacking.

I’m very excited about many of the features Dremel built into their first 3D printer. The price is a little high compared to the price of a Dremel rotary tool or saw, but $999 is quite reasonable for what you get compared to other $1000 3D printers.

Thanks to Dennis for the heads-up!