ToolGuyd > Power Tools > Cordless > New Dremel Lite Cordless Rotary Tool for Beginners, 7760
If you buy something through our links, ToolGuyd might earn an affiliate commission. 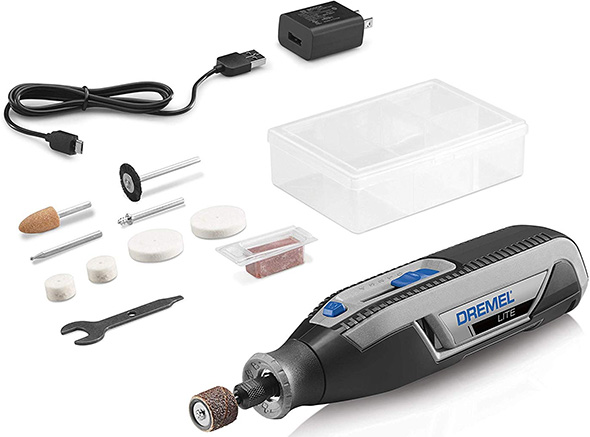 Dremel has come out with a new rotary tool that they describe as being designed with beginners in mind. The new Dremel Lite 7760 is compact and portable, featuring a built-in Li-ion battery that is recharged via USB.

The Dremel Lite has variable speed slide switch that also doubles as the on/off switch, and an EZ Twist nose cap for easier tool changes.

Dremel’s advertising materials don’t yet specify the speed range, but there are 4 positions. This gives users more speed adjustment options than the Dremel MiniMite ($23 via Amazon) andMultiPro ($39 via Amazon), but less than the also-cordless Dremel Micro ($69 via Amazon). 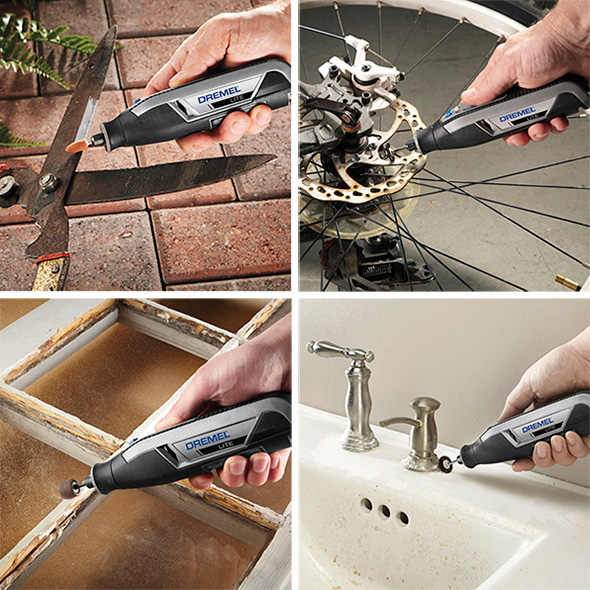 Dremel says the new Lite is:

*Thumbs up* to the USB charging, the slide switch, and EZ Twist nose that doubles as a collet wrench.

*Thumbs down* to not having a separate on/off switch, and the very basic nature of the included accessory kit. An extra sanding sleeve and maybe a mandrel and cut-off wheels might be welcome. But, I can see why they included a focused selection of engraving and polishing accessories.

Overall, the Dremel Lite 7760 beginner’s cordless rotary tool looks like a reasonable little package. I can see it being appealing to users who might think they need or want a rotary tool, but whom aren’t ready to invest in a full Dremel corded or cordless tool kit.

Beginners who might want a broader accessory set might want to look at the Dremel 160pc all-purpose set (currently $24 at Amazon), but I would wonder about how the Dremel Lite would perform with some of those accessories. It is called the Dremel Lite, and so I would assume it’s not the ideal choice for heavier cutting, grinding, or sanding applications..

Dremel has been on a roll, developing consumer and beginner-friendly tools around the $40-$50 price point. Here are some of their most recent new corded and cordless power tools:

Can you use something like this? What do you think they’ll come out with next?