ToolGuyd > Editorial > Dremel at NYC Maker Faire
If you buy something through our links, ToolGuyd might earn an affiliate commission.

Dremel had a medium-sized booth at this past weekend’s 2014 NYC Maker Faire. As expected, they showcased their new Idea Builder 3D printer, but they also had a couple of other new tools on display. There was also an artist carving up some nice-looking 2D portraits using the Dremel Fortiflex flex-shaft tool. 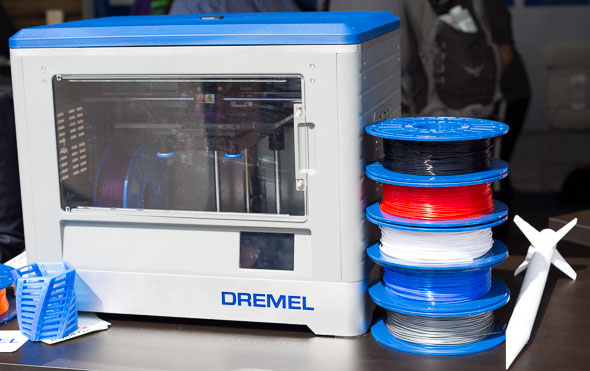 As mentioned in our Dremel 3D printer preview, the company has partnered with a 3D printer company (Flashforge) and design software company (Autodesk) to roll out a new $1000 3D printer for the masses.

Has Dremel done anything revolutionary with this printer? No. But is this a very big deal? Yes. There were very many 3D printers showcased at this year’s NYC Maker Faire, but how many will survive these next few years? Dremel has an established distribution network and scaled support network as well, which makes them – and this printer – very appealing in the consumer 3D printer market. 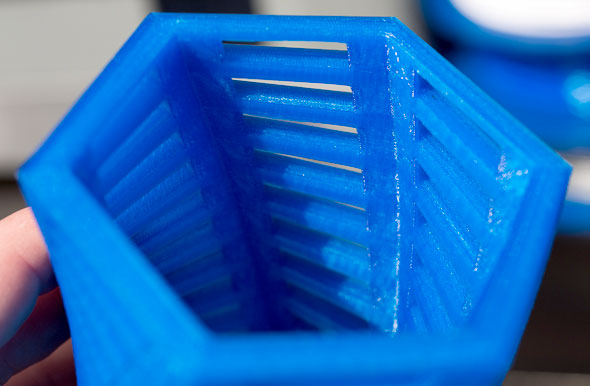 I examined some of the sample prints, and while the quality was not extraordinary, it was very good and more importantly – consistent. 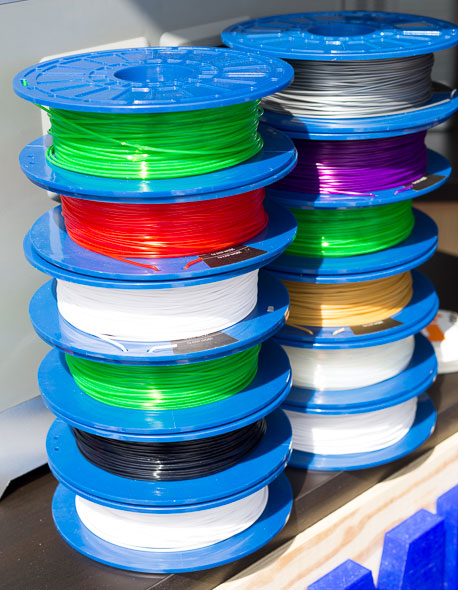 They didn’t have the full color range onsite, but from what I could tell the filament quality wasn’t bad. 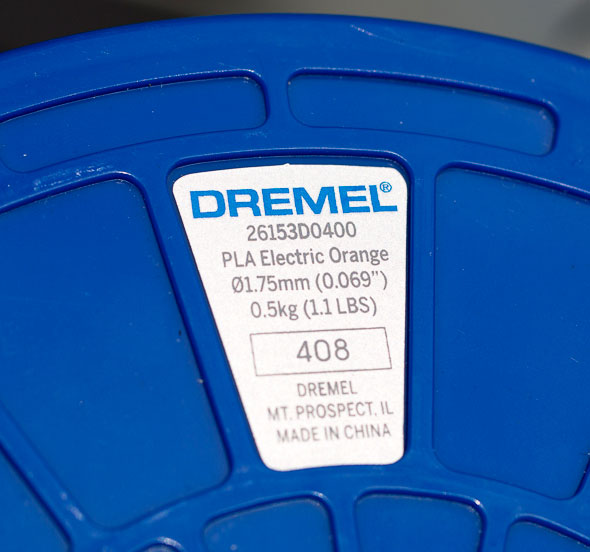 Other brands’ 0.5 kg filaments can be purchased for $15 to $25, with an average price of about $20, making Dremel’s filament a bit more expensive. You shouldn’t have any difficulty using other brands’ 1/2-kilo filaments, as long as they’re PLA and with a diameter of 1.75 mm. 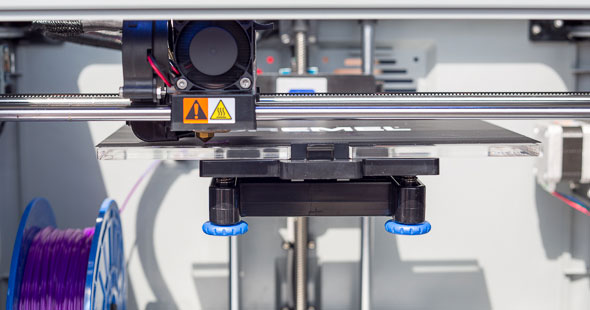 The plastic knobs on the leveling platform look to be easy to grab and adjust. 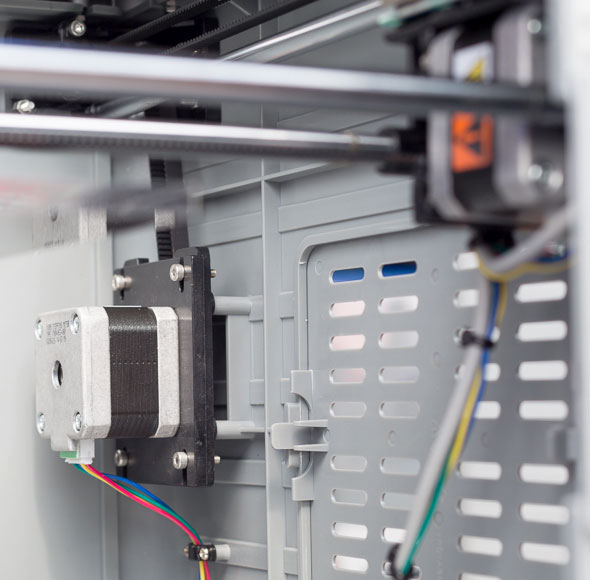 Dremel says there’s an active cooling fan, but I didn’t see any fans except the one mounted to the extruder. There are vents on both sides of the 3D printer chassis, and there weren’t any filters to prevent PLA fumes from escaping.

Unless Dremel comes out with a bolt-on filtration module, users will want to use this printer with adequate ventilation. 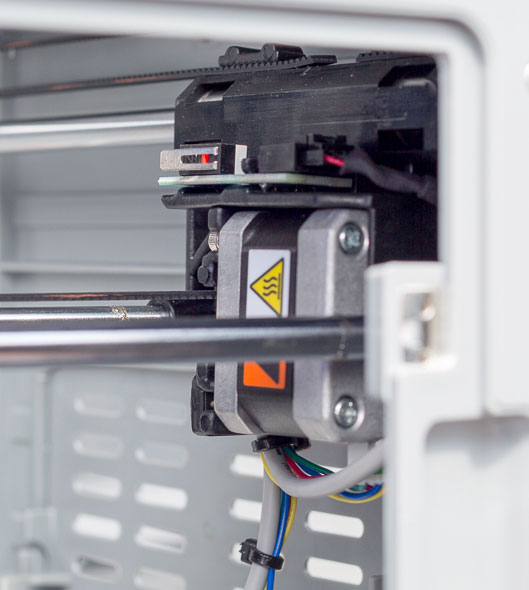 All of the motion systems seemed to be easy to adjust and maintain. 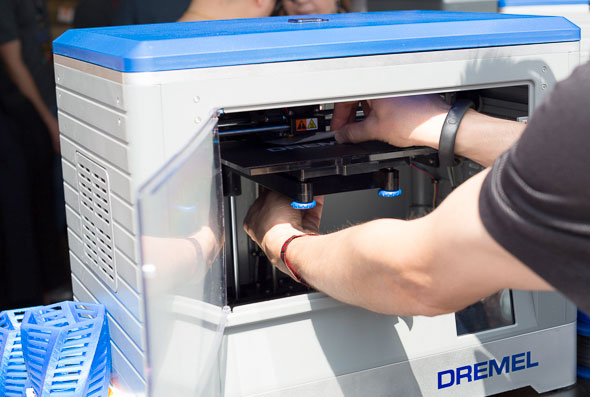 I watched as a Dremel tech leveled the build platform. As with other printers, leveling required a piece of paper as a feeler gauge and a couple of go’s at the leveling screws, but it didn’t look challenging at all. 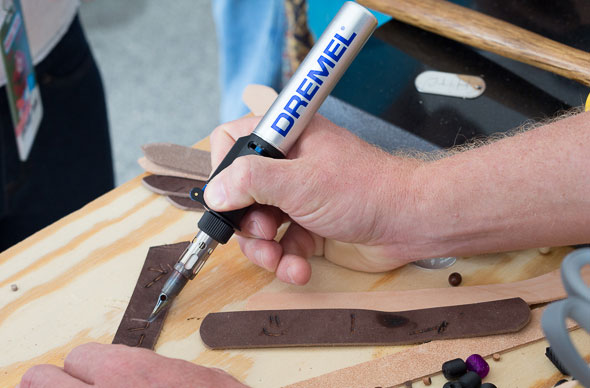 While there were folks oohing and aahing at the 3D printer, there seemed to be even more people crowded around the hands-on demo station.

Of course, when I tried to take a photo, the demonstrator’s torch ran out of butane and then had trouble getting hot enough fast enough. 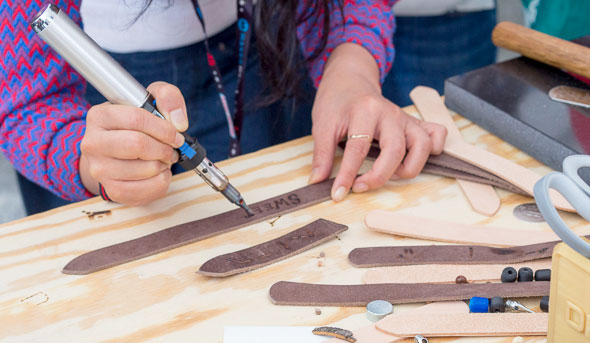 I don’t remember if these were meant to be bookmarks or bracelets, and I don’t think anyone quite cared what they were making.

It was nice to see so many kids interested in Dremel’s demo activities. I imagine that Dremel will probably make appearances at Bay Area and NYC Maker Faires in 2015 as well. And if not, they should. 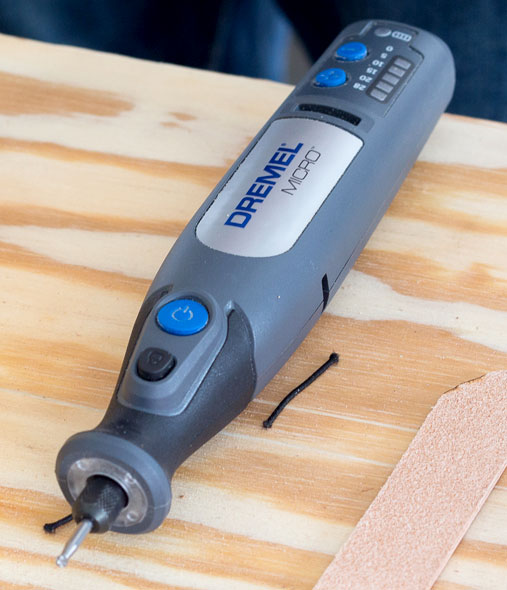 The Micro was also available for hands-on use. 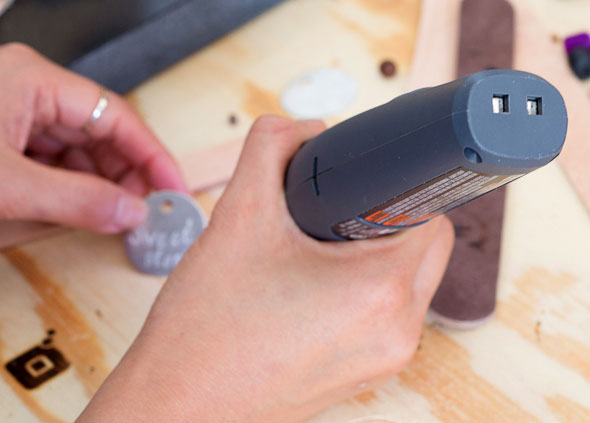 Some of the charms came out well, others were a little messy. Wow I didn’t know it would cut/engrave/move so fast is something I heard a couple of times during my hovering.