ToolGuyd > Power Tools > Rotary Tools > Dremel Rotary Tool Accessory Organizer and “Refill” Assortment
If you buy something through our links, ToolGuyd might earn an affiliate commission. 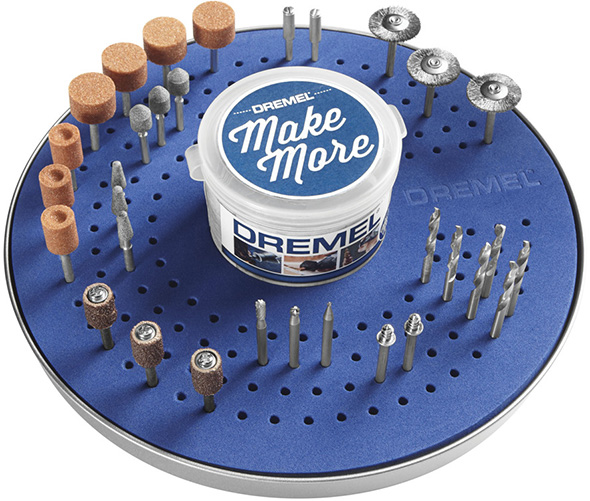 Dremel has come out with a new rotary tool bit set and organizer bundle, presumably for the 2017 holiday shopping season.

You get a lot of “repeats” in the accessory selection, but that’s not what I’m really looking at – I’m paying more attention to the organizer/bur holder that it comes with.

Update: Nope, I asked Dremel and they said the base is flat and does not rotate.

I’m not in the mood to squint and count how many holes there are, and the Dremel product listing at Lowes doesn’t tell you, so let’s just say a few dozen. It looks like they’re all the same size – presumably 1/8″, with no guesses as to where you’re supposed to store smaller diameter bits. 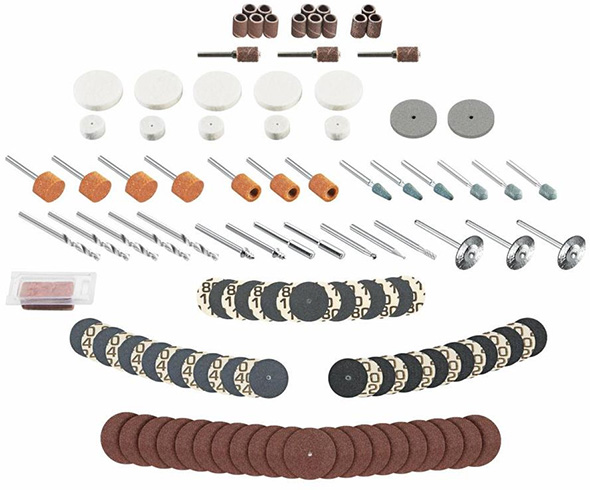 Looking at the accessory assortment, you get some cutting wheels, polishing buffs, polishing compound, sanding drums, sanding discs, mandrels that go along with mounted accessories, as well as grinding and cutting burs.

It looks like a useful selection of frequently-used accessories. I see this more of a “refill” pack, rather than a starter assortment. I’m not sure if it makes the bundle more or less appealing to me.

Still, this will probably be a must-buy for me the next time I place an order at Lowes. I was going to say the next time I stop by my local Lowes, but it looks like parcel shipping is FREE right now, with no minimum order.

I’m not classifying this as a “deal,” because I assume it was designed around $30 holiday deal pricing. So even though Lowes says it’s at the “new lower price” of $30, I have the strong belief that this is exactly the price it was meant to sell for.

It’s still a good bargain, though, or at least a good enough bargain where I plan to buy one.

Update: Be sure to check out what Jason says in his comment, below. He bought one and shared that it’s made of foam; from the images, I thought the organizer tray was made of hard plastic.