ToolGuyd > Power Tools > Oscillating Tools > New Dremel Universal Oscillating Multi-Tool Blades Have a Dual Interface to Fit More Tools
If you buy something through our links, ToolGuyd might earn an affiliate commission. 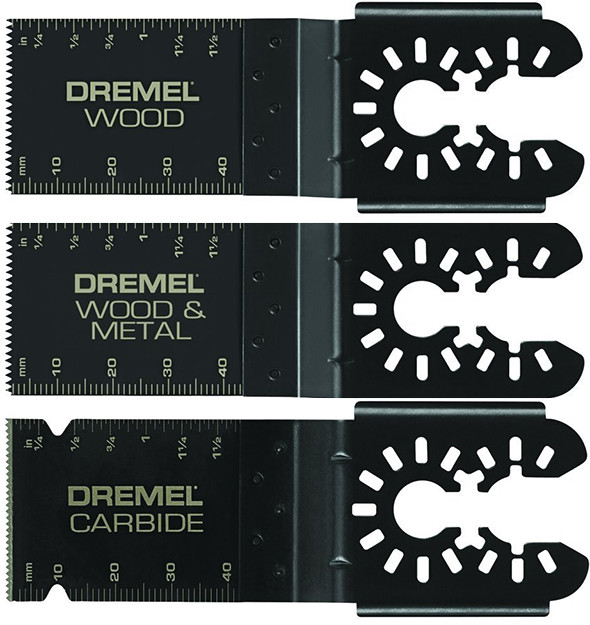 Dremel has come out with 3 new universal oscillating multi-tool cutting blades. Perhaps this is tip of the spear, or it could be that these are the only new oscillating tool accessories that we’ll be seeing in some time.

The new blades, which feature flush cutting shapes, are engineered with two separate adapter interfaces. Because of this, they fit Fein, Bosch, Milwaukee, Ridgid, Makita, and Rockwell oscillating tools, and also Dewalt and Porter Cable.

Dewalt and Porter Cable tools have a different quick-change interface that typically requires an adapter to be used for other brands’ oscillating tool accessories. Tool-free blade changes are usually not possible if you’re using the adapter.

Dremel says that these new universal oscillating tool blades are the first “truly universal” accessories available that don’t require an adapter. They also say that the dual interface fits “all competitive oscillating tools.”

Dremel says that the wood-cutting blade is their most popular flush-cutting oscillating multi-tool accessory. Their bimetal wood and metal cutting blade is likely popular as well.

The results were eye-opening. Bosch’s carbide-toothed blades were remarkably better than the other brands non-carbide blades. All of the blades are priced around the same, so it’s a wonder why other brands don’t follow Bosch’s lead.

As an aside, did you know that Bosch came out with a carbide-tooth multi-material blade? It seems to have earned some stellar user reviews.

Dremel is a Bosch company, and so maybe this new carbide-tooth blade will be as good or almost as good as the Bosch.

This is a surprising move by Dremel, but also good to see them trying something new.

These blades look to be longer than standard single-interface ones, and since there are two interfaces stamped out of the mounting base, that explains the added metal reinforcement to help keep things rigid.

I haven’t used Dremel oscillating blades or accessories in some time, but I generally consider them to be okay. They’re nowhere as good as Bosch or Fein accessories, but they also typically cost less. Except for these.

You can buy a Bosch OSC114C carbide plunge cutting blade – the same that I tested last year – for a little less than $18 via Amazon. The narrower OSC34C is under $12 via Amazon. Those Bosch accessories are said to be made in Switzerland. The Dremel Carbide blade? Made in China, at least according to the Amazon product description.

If you’ve got a Dewalt or Porter Cable tool and still want to keep the quick-change functionality, why wouldn’t you buy Dewalt oscillating tool blades? They’re less expensive than the Dremel blades, and they’re also made in the USA.

As someone who uses multiple brands of oscillating tool, I appreciate what Dremel was trying to do with these. But from what I see, I don’t know if I’d try them out or not. If any or all of these blades were a couple of dollars cheaper, or available in a 3pc set for $25 or so, I would find them to be far more appealing.