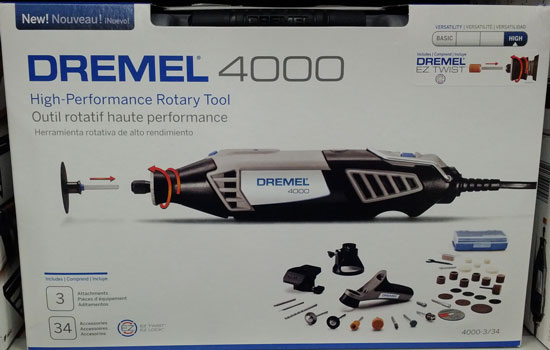 Dremel introduced their newish 4000 series rotary tool back in October 2009, and their 3000-model tools July 2011. As you might guess, the higher-numbered tool is a more powerful and premium model. Even so, the smaller 3000 tool sports one highly desirably feature the 4000 tool lacks – an EZ Twist nose cap collet design. Until now.

Over at a local big-box store, I caught glimpse of new model-4000 product packaging that shows off the new EZ Twist feature. It doesn’t look like anything else has been changed.

What’s so great about the EZ Twist collet-lock design? Essentially, Dremel built a collet wrench into the threaded nose cap found at the front of rotary tools. This is the piece you remove when attaching certain rotary tool guides and accessories.

While the EZ Twist built-in collet wrench design is not revolutionary, it does come in handy, especially for users like me that habitually misplace the small flat collet wrench that comes with each tool.

It probably won’t be long until the upgraded models reach all distributors’ warehouses. For the time being, there’s no way to tell which version you’ll receive if you purchase a kit online.

There’s also no word as to whether Dremel will send out retrofit kits to users who previously purchased 4000-series tool kits. This should be as simple as sending out collars upon request.