ToolGuyd > Power Tools > Cordless > Whoops, I Drop-Tested the Milwaukee M12 Fuel Surge This Weekend
If you buy something through our links, ToolGuyd might earn an affiliate commission. 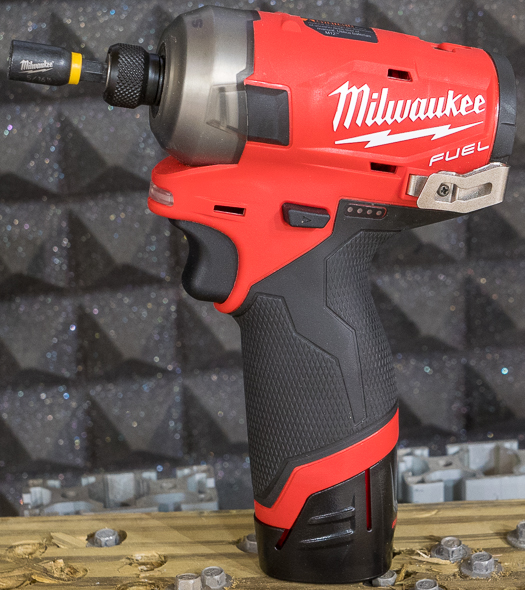 I’ve been putting in a lot more time with the Milwaukee M12 Fuel Surge lately, their quiet “hydraulic impact driver.”

Yesterday, I dropped it off a ladder. Err, I mean I “drop-tested” it from a step ladder.

I was working in a tight corner, installing a woodworking air cleaner near to my new New Age garage wall shelves, and started putting some of the tools I needed on those shelves.

Whoops, I dropped the Milwaukee M12 Surge right off the top shelf, from a height of maybe 7-ish feet. Uh-oh, sure it was damaged, right? Nope!

How often do users drop tools off ladders, off the back of their trucks, off cabinets?

I’ve damaged tools before, and quite frankly I expected the worst with the Surge. I know that Milwaukee designs their tools to withstand drops and impacts, and integrates shock-absorbing technologies where possible, as do many other pro-grade cordless power tool brands.

It landed hard, on a concrete floor covered by a thin layer of epoxy, and with nary a scratch. Well, at least without any scratches or glaring damage I could detect.

I used the Surge a bit more, and then again today. No harm, no foul.

I dropped, oh I mean drop-test ed, a bunch of other tools between yesterday and today, including a Franklin stud finder (see Ben’s review of it here), a Franklin mini stud finder, two kinds of FatMax tape measures, Inkzall and RevMark markers, and an impact socket.

Meanwhile, the one tool I thought I’d drop – a framing square – stayed put, despite the different precarious angles I’d perch it in.

There’s no guarantee that bigger tools would have survived the drop, or that certain angles couldn’t or wouldn’t have destroyed my Surge sample. The Surge is smaller and lighter, but by no means light, and I was surprised and delighted that it survived the drop without any issues thus far.

I was particularly worried because the Surge has a hydraulic impact mechanism, and I don’t know how sensitive it is to impact shock like this. So far, so good. I would assume that negative consequences would have manifested by now, but perhaps not.

Now that you know how clumsy I’ve been lately (or maybe I can convince you it was all intentional), I’m curious in know about all the types of tools you’ve dropped.

Have there been any standouts where you dropped and broke a tool? Near misses, which is how this incident stood out to me?