There are quite a few circular saws with counter-rotating blades on the market, but what would you think about a reciprocating saw with dual counter-acting blades? DualSaw says that the motion of the two blades in its RS1000 and RS1200 reciprocating saws reduce kickback and vibration. What’s more, they claim that the saws are easier to control, safer to use, and that they produce a smoother cut.

The 19″ RS1200 has the better feature set of the two saws. It boasts a 12A motor that’s controlled by a variable speed trigger, and it power the blades up to 2500 strokes per minute. You can set the stroke length to either 0.75″ or 1.25″ to match your material, and front-mounted LEDs help to illuminate whatever it is you’re cutting. For times when you want to change your grip, the entire handle, controls and all, rotates 270 degrees with respect to the body of the saw. 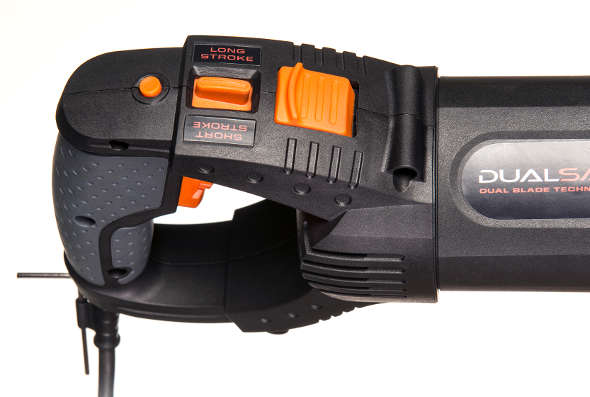 In contrast, the RS1000 is less powerful (10A), shorter (18″), and has fewer features. It’s missing the variable speed trigger, rotating handle, and LED lights. You are also stuck with a single 1.25″ stroke length.

Although the tang of the blades for the DualSaw look like standard reciprocating saw blades, the blades consist of two individual blades held together by a sliding joint. You might be able to mount regular blades in the DualSaw, but this is not recommended. At best, the saw might not function properly if you don’t use DualSaw’s special blades. Let’s not think about the worst that could happen. And so, to get the most out of the saw, you’ll be stuck buying blades from DualSaw for the life of the tool.

It’s worth noting that DualSaw says the blades have a universal tang and can be separated if you need to use them as single blades. You can use DualSaw blades in standard reciprocating saws, but cannot use standard recip blades in a DualSaw.

The following video shows the counter-action blades in motion.

Do the counter-acting blades really produce all the positive effects that DualSaw claims? Conceptually, I can see these saws could very well reduce kickback, because when one blade is pushing while the other will be pulling, and that the design makes the saws easier to control. In real life, if you don’t rest the foot of a regular reciprocating saw against the material you’re cutting and don’t have a damn firm grip, the saw’s going to buck. I don’t know if or how well the counter action will mitigate this tendency.

Any advantages gained by this two blade counter-action need to be weighed against the extra complexity and cost. Will the added mechanism needed to drive two blades weaken the saw in any way? Reciprocating saws take a beating, especially when they are used in demolition. Will the two bladed system stand up to that punishment?

Not to mention that the only source of blades is the manufacturer. If you need a new blade, you can’t just go down to the hardware store to grab one, you’ll have to order it and wait for it to ship. For me, and I’m guessing many readers as well, that just might be the deal breaker for this saw.