ToolGuyd > Flashlights & Worklights > Eco-i-Lite Nightlight is Secretly an Inductively Charged Flashlight
If you buy something through our links, ToolGuyd might earn an affiliate commission. 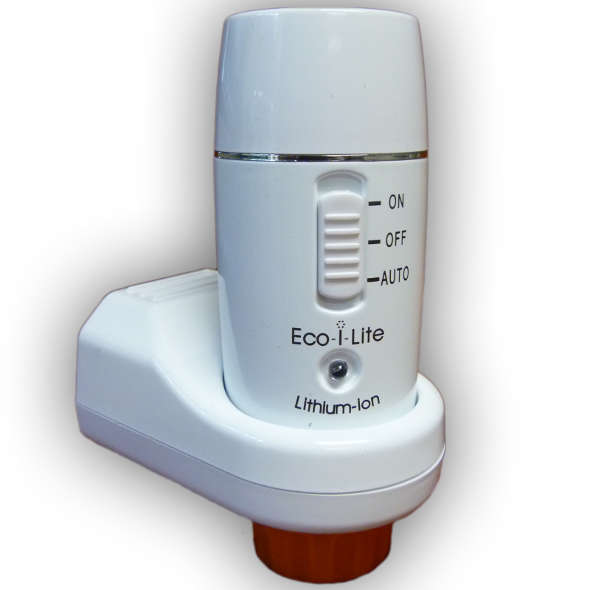 Many companies sell plugin emergency flashlights, but what makes Capstone’s Eco-i-lite series cooler than most is that it charges inductively just like some toothbrushes and phones. You can’t screw up putting it away because there’s no incorrect position, simply slide it back into the base and it’s charging.

Capstone sells several models of the Eco-i-Lite which differ in regard to functionality and number of LEDs.

The 4 LED 3-in-1 Eco-i-lite, shown above, plugs into an outlet to recharge its built-in lithium-ion battery, which can power the flashlight for up to 4 hours per charge. The plug rotates so the flashlight is always upright whether your wall outlet is right-side-up, upside-down, or sideways.

The Eco-i-Lite turns on automatically when it senses that the outlet has lost power, so that you can easily find it in a blackout. There is also a three-position switch, so you can use the flashlight manually. It also can sense when the room darkens, and when it does it goes into a special lower power nightlight mode.

Going up in functionality, the Eco-i-Lite Power Failure Lights also have a separate 3-position power button for setting the flashlight to on, off, or flashing modes. The 4-in-1 models have an additional light on the side for extra utility.

Here is a complete list of the Eco-i-Lite models:

The models with higher LED counts are sometimes advertised as 5 and 10 LED lights. The 8 LED model has 3 of those LEDs for its nightlight mode, and the 16 LED model has 6.

The 4 LED Eco-i-Lite will run you about $10 at Home Depot, or you can pick up a two pack of the 16 LED 4-in-1 Eco-i-Lites for $31 including shipping. The 16 LED model has 10 that can be used in flashlight mode, and 6 that are used in nightlight mode. Other models are priced between these two.

Don’t think would be useful? Imagine that you are ripping boards on the table saw in your windowless basement shop when the power fails. After you grope for the table saw off switch (so that it doesn’t start up automatically when the power returns), you scan your shop to see faint red and green lights from your various chargers. You head in the direction you know the door is located and slowly start towards it. Midway there, you slam your hip into the edge of the workbench. As you climb the stairs to find the sliver of daylight peeking out from under the basement door, you make a mental note to yourself: “I’d better get one of those emergency flashlights.”