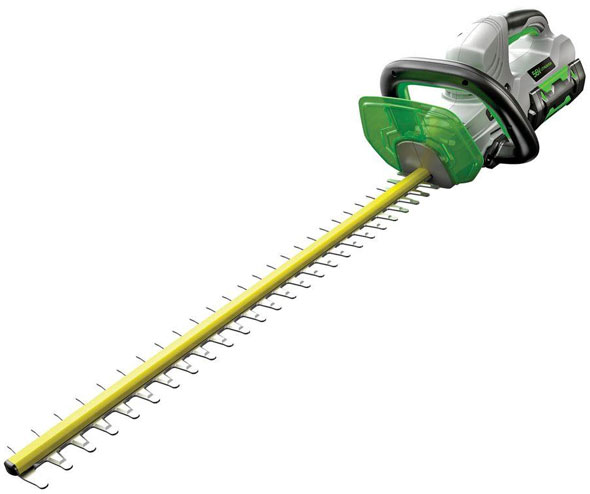 We recently received a couple of EGO’s new 56V battery-powered cordless lawn and garden tools to test out. Designed around an industry-leading 56V lithium-ion battery, these tools boast the power of gasoline-powered tools without the hassle, noise, or fumes associated with gas engine tools. 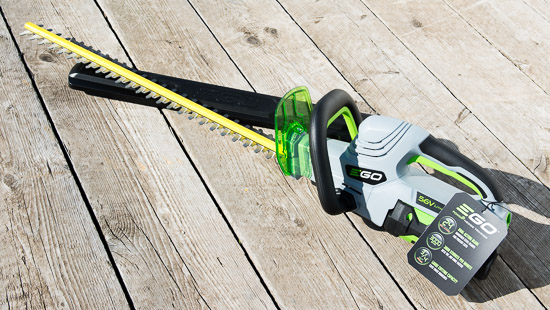 I was not sure what to expect from the EGO hedge trimmer. I have only used hedge trimmers a handful of times in the past, so I sought advice and testing with my dad, a man with over 35 years experience in the landscaping, nursery, and tree care industry.

My dad was excited to help test the new cordless trimmer, and he had many bushes in need of trimming after years of neglect. I brought the trimmer over to his house with a freshly charged battery, and we immediately tried it on a large bush beside the house. “Not bad, yeah, this cuts pretty nicely” he said in a pleased voice, but I could tell he was very skeptical if it would hold up to more than a couple of bushes.

I set him loose upon a hedge row consisting of 17 bushes about chest-high. After about 30 minutes he finished trimming the whole row and said: “How long is this thing supposed to last? It’s still working!”

My mother heckled him to see how well the trimmer fared on their other overgrown hedge row that had much larger, more mature, and even more unkempt bushes. We were all somewhat joking about using the trimmer on this row, as many of these bushes were 8-12 feet tall. We gave it a shot and were impressed as soon as we started trimming these overgrown monsters. There were quite a few large branches 1/2″ to 3/4″ thick. 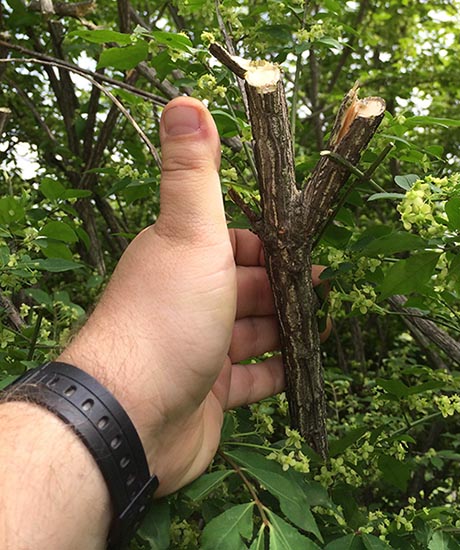 As we were 20 minutes into this row, my dad again asked me how long the trimmer was supposed to last. I assured him it would almost certainly need a recharge soon, as we were getting very close to an hour of constant use. We were both astonished as we reached the end of this massively overgrown row of bushes and the battery hadn’t quit yet. 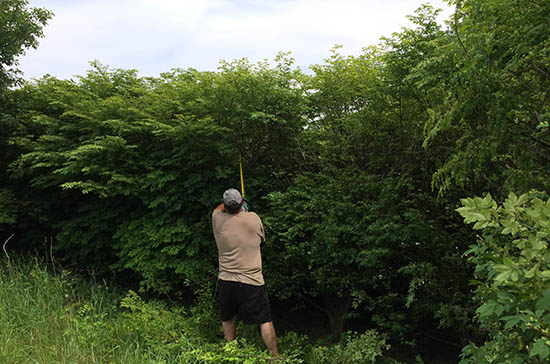 “I think they lied to us,” my dad said grinning, feeling rather exhausted after holding this 12 pound weight in outstretched arms. After an hour and fifteen minutes in the heat, we quit trimming. While the trimmer would have happily held out for more, we were both exhausted from working in such a humid day. My dad smiled and happily exclaimed that he’d certainly enjoy one of these as a Father’s Day gift. 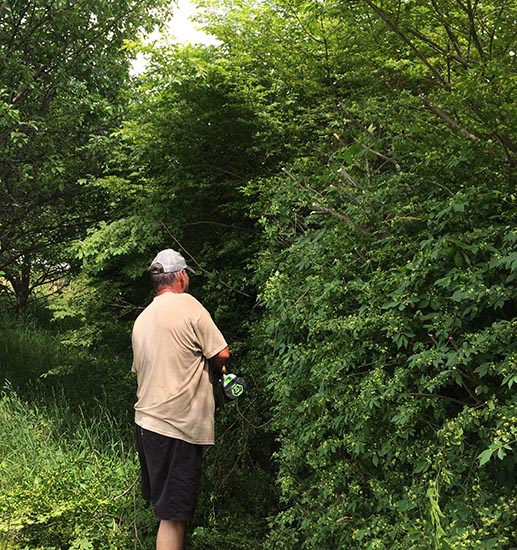 My father and I were both very impressed with the EGO 56V hedge trimmer. It trimmed and shaped our bushes and effortlessly chopped even thick branches cleanly.

Both of the areas that we trimmed were far from electric outlets, and so a corded trimmer wouldn’t have been much use. The cordless trimmer’s tetherless battery power came in very handy. The clean cuts and overall power were very impressive for a battery powered tool.

When compared to other electric and battery hedge trimmers, the EGO does seem slightly expensive, but at $199 for the kit it also looks to be a relative bargain compared to gas-powered models. Many electric trimmers are only $100 or less, but they won’t be very helpful if you need to stray further than your extension cord.  Gas hedge trimmers seem to start around $300 and are also significantly heavier, plus they require more maintenance and attention than electric and battery-powered models.

I think we trimmed an above-average amount of bushes for many residences, and I am confident this trimmer would be an excellent fit for many households. I am very excited to see what EGO adds to their 56V line in the future.

There is a safety switch built into the front handle that needs to be pressed before the trimmer will turn on. This usually isn’t difficult to manage, but could possibly limit grip positioning.

The trimmer housing is made with what feels to be a high quality plastic, and the bar and blades are metal with tight and precise tolerances.

Phenomenal battery life. Runtime is rated at 1 hour with the 2.0Ah Li-ion battery pack included in the kit, but the trimmer was still cutting after about 1 hour and 15 minutes of constant use, including work on some very thick branches.

Thank you to EGO for providing the review samples unconditionally. Review samples are typically given away, donated, or retained for editorial and comparison purposes.