ToolGuyd > Hand Tools > Layout & Measuring > New Empire Level Tape Measures
If you buy something through our links, ToolGuyd might earn an affiliate commission. 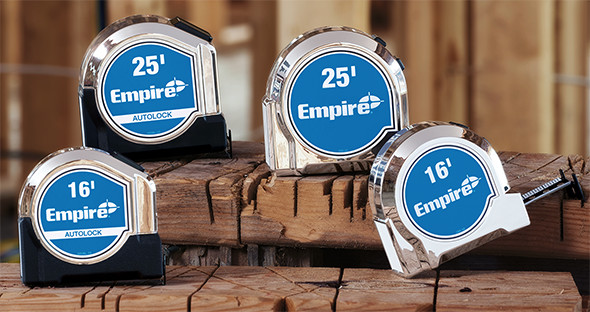 Empire made tape measures? Yes. I remember buying one a few years ago at Sears, when they had a $5 off $5+ coupon. It was $5.00 and I got it for free. It looked a little like the new model shown above, but was covered with what I believe was a removable boot. I passed it along to an electrician buddy, who used it for quite some time before it wore out. The last we talked about it, he liked it a lot.

No, no doubt thanks to Milwaukee influences and R&D funds, Empire Level is revamping their tape measure lineup.

There will be Autolock and chrome tape measures, with nylon-coated blades. The Auto-locking tapes have a brake that holds the blade in place and provides better retraction. 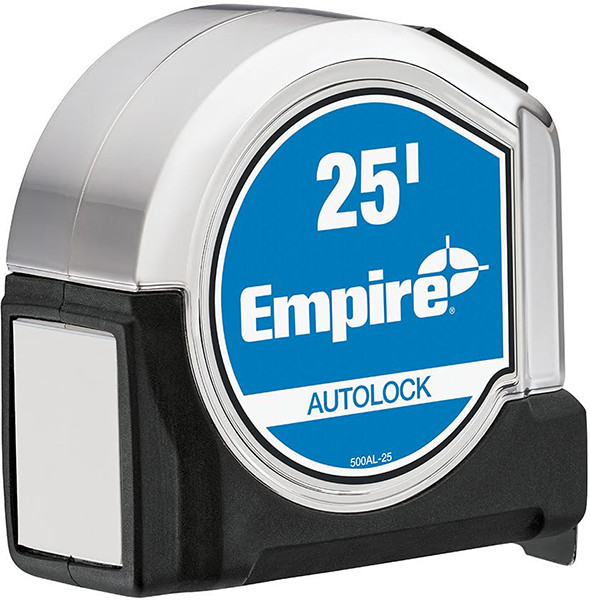 Here are some keypoints from the press materials:

– Reinforced 5-screw housing for increased durability against wear and tear and drops. 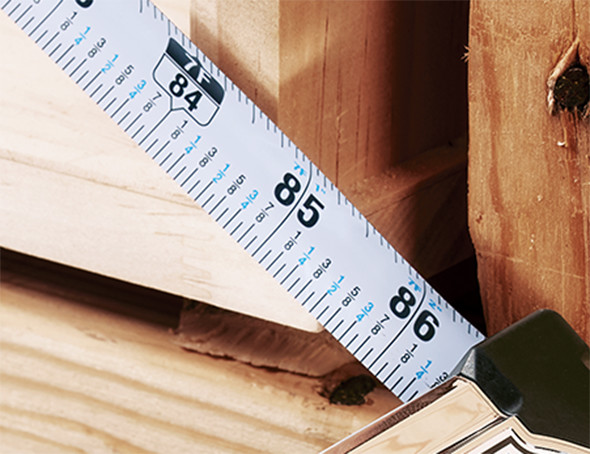 The new tapes are said to have been designed to be more compact and ergonomic, and to provide a better in-hand fit.

Each also features a marking surface, for jotting down quick measurements and notes. (In the press images, the 12′ tapes seem to be lacking this feature, but the others, 16′, 25′, and 35′, have the marking surface at the rear side of the tape, as shown in the first image above.

While not a fan of fractional markings, at least Empire Level designed theirs to be unobtrusive and spaced out.

I remember taking a multiple choice test in junior high or high school once. It was a long one, where we had to number down the page in 2 columns. I thought I was being clever, staggering the answers for easier readability. The teacher hated it, asked me to redo it in a straight line. I find staggered answers easier to read and track through, they preferred straight down.

These days, I find staggered measurements, numbering, and other similar sorts of things easier to read sometimes, but on tape measures I prefer numbers to be perfectly aligned and well spaced out. Staggering the numbers to cram more numerals makes readability harder, in my opinion.

That’s why I think Craftsman’s new tape measure will likely clash with my personal preferences.

I don’t know how I’ll feel about the fractional markings on the new Milwaukee compact tape measures (look closely), or the ones on these Empire Autolock tape measures, but I’ll allow myself to be open-minded. At first glance, it looks like I could either like them or easily ignore them.

New Empire tape measures at low-ish prices? Sounds good to me. Curiously, the Autolock and chrome tapes are priced the same.

It’ll be interesting to see how big the tape measure housings are, and how long the standout is.