ToolGuyd > Hand Tools > Hammers & Mallets > New Estwing Aluminum Hammer (Al-Pro) Has a Hidden Feature
If you buy something through our links, ToolGuyd might earn an affiliate commission. 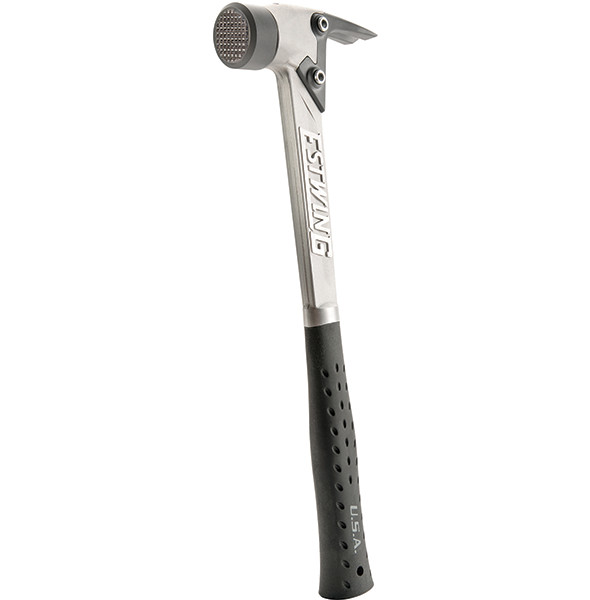 What can brands do to make a better hammer? That’s not an easy question to answer. Hammers have been around for a long time, and major brands have long figured out how to make a good hammer. Many have learned how to make a great hammer. But how to make one that’s even better?

In recent years, a number of brands, starting with Dewalt, have designed faster-swinging hammers that they claimed hit much harder than other hammers in their class, and without costing as much as titanium models. Estwing’s Ultra hammer is one such model.

Estwing has come out with a new hammer, the 14 ounce Al-Pro, and it’s unlike any hammer I’ve ever seen before. It’s definitely a first, and not just for them. From what I can tell, it’s a first in the professional industry as well.

The Estwing Al-Pro hammer is a professional hammer that is forged from lighter-than-titanium aircraft-grade aluminum. Estwing describes it as the latest in hammer design technology.

It has a Permacap steel head, and an interlocking steel claw, giving the Al-Pro hammer added strength and durability where it’s needed. The claw length is also reduced, for greater leverage. The hammer’s head also features a built-in magnetic nail starter.

But here’s the hidden feature: Inside the aluminum head is vibration-dampening shot, which Estwing also says gives every blow the maximum force.

I do know that Nupla makes a 28 oz dead blow framing hammer, with a fiberglass handle.

From what I can tell, the Estwing Al-Pro hammer is the industry’s first professional aluminum-handled dead blow framing hammer.

The hammer provides power in a light-weight package for the best performance with extended use. 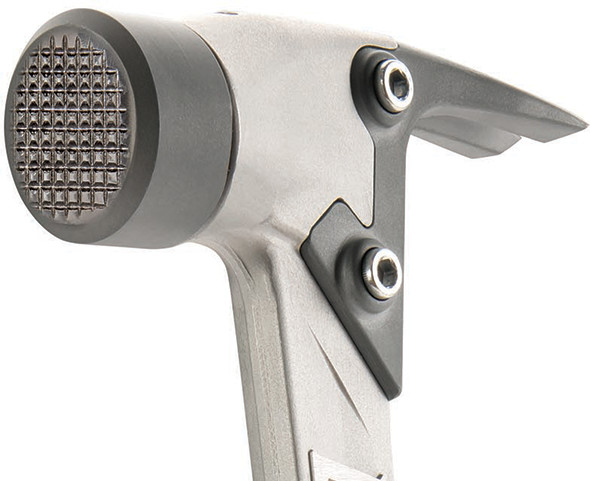 Who the heck cares, am I right? Sorry, that bit was an attempt to get your attention. But if I asked what’s the benefit of titanium, maybe you would have thought I was side-tracking,

As I discussed a few years ago, the main purpose of titanium-handled hammers is to reduce recoil shock and vibrations.

Do you know what else significantly decreases recoil shock? Dead blow hammers.

Normally, dead blow hammers are a way to get greater striking power with less recoil and vibrations. Aside from dead blow mallet-shaped hammers, there are also dead blow ball pein hammers, typically with plastic handles.

With all other things being equal, an aluminum-handled hammer should swing faster and strike harder, compared to titanium-handled hammers, as well as other modern-handled hammers. That’s what I’m thinking about the Estwing Al-Pro, while I wait for further official details.

There are 4 hammer options. You have your choice between a smooth hammer face, and a milled one, and Estwing’s shock-reducing grip in either blue or black.

Certain Estwing dealers will be carrying the new hammer, and they said customers can always special-order any Estwing product from their local Ace Hardware, True Value Hardware, Fastenal, Home Depot, or Do It Best store.

That’s something I did not know before, that you can special order any Estwing product from certain dealers.

Final pricing is still being worked out, but I was told to expect a price of at least $200.

Don’t worry, you’re not the only one a little shocked by the pricing. I was thinking that the price might be around $75 or thereabouts, and definitely less expensive than a titanium-handled hammer.

Okay, so here’s a summary of what the new hammer offers:

At face value, these are all compelling features. All together, they contribute to what might be the most advanced hammer currently on the market.

But… at high cost.

This hammer offers several new technologies, but they seem to be rooted in solid and established theory.

Should you buy a $100+ hammer? Do you use a hammer every day? Does it contribute to a big part of your workload or fatigue? Will a lower-vibration and very high power-to-weight ratio improve the quality of your work? And I don’t mean your work as in your results, but the work you do. Will a better hammer give you enough of a better working experience?

I would think that the Estwing Al-Pro was designed to compete with Stiletto and other titanium hammer makers. That makes sense, as Ti-handled hammers typically cost over $200 as well. The new Al-Pro hammer is priced at a premium compared to steel hammers, but at $120 it’s considerably less expensive than leading titanium models.

Estwing offers hammers of all kinds. This one isn’t designed to compete with their lovely one-piece steel hammers; it seems to be a more premium option for those who have already decided to up their budget and venture in titanium territory.

It’s above my needs, and higher priced than I could ever personally justify. But wow, just wow.

I like to think I have very strong BS-detecting radar when it comes to tools like this. And right now it’s giving me the all-clear.