ToolGuyd > Hand Tools > Mechanics' Tools > Facom 440 Combination Wrench Review
If you buy something through our links, ToolGuyd might earn an affiliate commission.

Update 1/6/20: I own or have used wrenches from many different brands, including (Sears era) Craftsman, Gearwrench, Proto, Armstrong, Williams, Wright, Wera, Husky, Kobalt, Milwaukee, Dewalt, and Tekton, and Facom is still my favorite brand.

Someone recently asked about my favorite combination wrenches, and it seemed like a good idea to bring this older review back to the front page.

This post was originally published on 3/20/15, and in the nearly 6 years since then I have purchased several more Facom wrench sets, so that I can keep them in portable kits and everywhere else I might need some wrenches.

In yesterday’s post Do Facom Tools Suck Because They’re Made by Stanley?, I mentioned Facom 440 combination wrenches, which are interesting in design and among my favorite wrenches to use.

I should clarify – these aren’t technically made by Stanley, but since Facom is a Stanley Black & Decker brand, they kind of are. Short answer: no, they most definitely do not suck. In fact, these are among the best wrenches I have ever used.

Okay, so what’s so special about these Facom 440 combo wrenches? They are quite exotically designed, but all of the standout features are purposeful. The design isn’t about making the wrench look good – they help make the wrench function better much of the time. 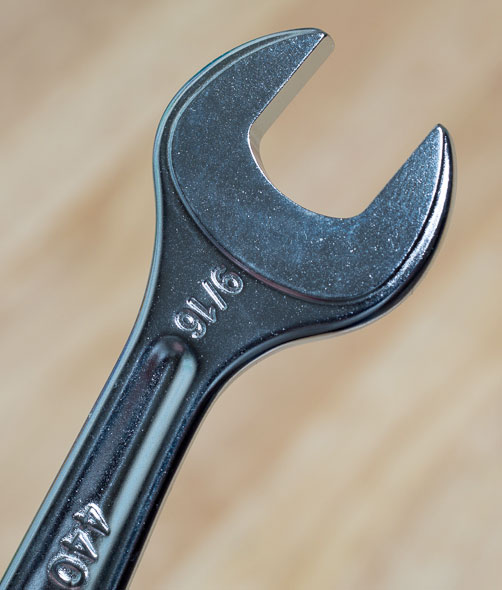 To start, Facom 440 wrenches have an unusual open-end geometry. You might have seen this deep offset on Proto’s recent spline ratcheting wrenches. The larger offset angle means you can achieve a wider swing when working in tight spaces before you have to remove and reposition the wrench.

Facom says that the open ends of their 440 combination wrenches can save 20% time and “15% space” in very tight spaces. I had no reasonable way of verifying these numerical claims with my use, but I did notice that these wrenches fit better in tight spots, compared to other brands’ more traditional wrench designs. 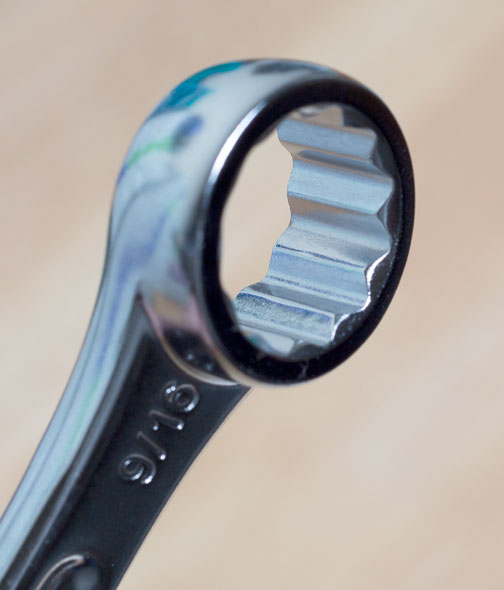 Next up – the 12px box end, which is thicker and designed for better fastener accessibility. The 440 box ends can better fit fasteners in recesses, and can also reach fasteners that are up close and next to other fasteners that can be difficult for traditional box end wrench designs to reach.

These wrenches won’t replace your sockets, but they can handle fasteners where other combo wrenches simply fail.

One more thing to like about these wrenches is that the box end features Facom’s OGV socket profile, which contacts fasteners’ flats and not their corners. This means greater torque transfer for more powerful tightening, greater durability, and less wear on fasteners.

The offset angle here is also 15°. 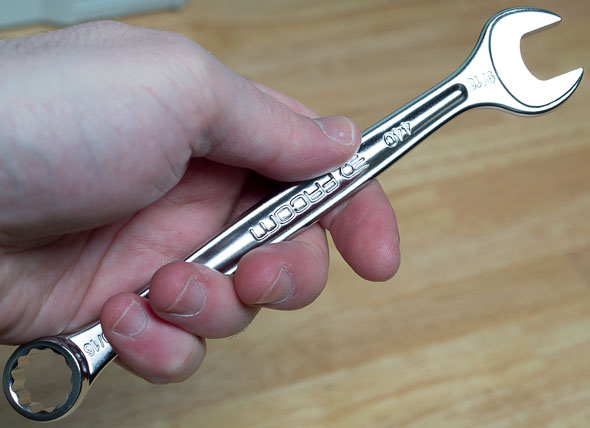 You have probably noticed that Facom 440 wrenches have an I-beam-style design – again, similar to Proto’s ratcheting spline wrench. They’re not quite the same as Proto’s though. Proto’s I-beam spline wrenches have straight edges, as you would expect from a wrench, while these Facom wrenches have greater curvature.

Facom says that the variable handle cross section doubles the surface in contact with the hand, for more comfort and painless torque application.

Are these wrenches comfortable to hold and use? Absolutely. That’s not to say that you’ll feel a world of difference. I didn’t. All I know is that the wrenches are simply comfortable to use.

Facom says that there are additional benefits as well, and that the 440 wrenches’ geometries help during pre-tightening. They say the geometry makes the wrench more stable, easier to guide, and that the wrench does not turn in the hand.

In Facom’s words, these wrenches combine compactness with strength. In terms of strength, these wrenches exceed tooling, ISO, and aerospace torque standards. And in regard to compactness, following are comparisons between a 9/16″ Facom 440 wrench, and a standard length Craftsman Professional wrench of the same size.

Facom 440 wrenches are short. They’re definitely not stubby wrenches, but they’re also not anywhere as long as traditionally designed wrenches, at least not the sizes I use regularly.

Although I haven’t done a direct comparison, I would think that Facom 440 wrench lengths are comparable to those of Craftsman’s raised panel wrenches. If you have Craftsman raised panel wrenches and at least one professional, industrial, or aerospace brand of wrench in your toolbox, I’m sure you know what I mean. 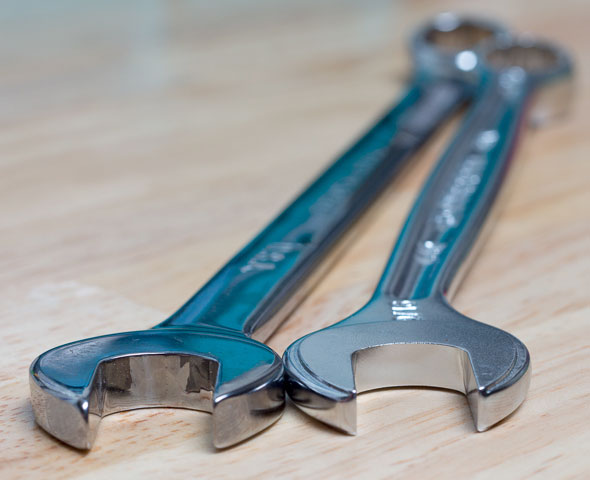 In this direct comparison, the Facom wrench has a lower profile open end than the Craftsman Pro wrench. The Craftsman Pro wrench was presumably built with the same processes as Armstrong wrenches, and compare well against other professional and industrials brands’ standard or even long pattern wrenches. 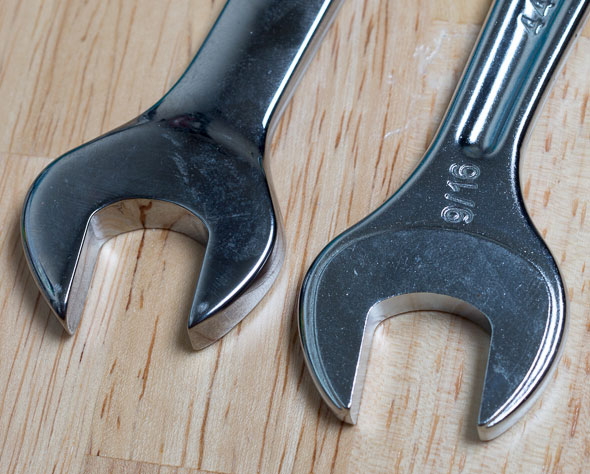 It’s not as easy to see the difference between open end geometries, but it might help to focus your attention on the curvature of the wrench’s lower jaw. You could also see a more two dimensional outline of the Facom geometry in the second photo from the top of the page. 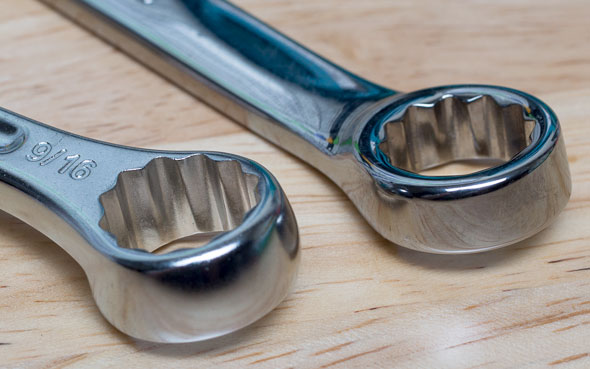 And, as mentioned, the box end is quite a bit chunkier. This is a deliberate feature, and a good one at that, but there are downsides, such as in scenarios that really call for a lower a profile wrench.

If I didn’t already like satin chrome finished tools, I would now. Some brands’ satin finishes just plain stink, but these are really very well done. They’re easy to clean, and also satin finished without being gritty.

I am quite pleased with these wrenches. They’ve been stellar, no matter what I’ve thrown at them. I don’t do much automotive work, but have used these wrenches for fabrication work, assembly, disassembly, and other similar tasks.

The open end design does increase the swing range of the wrenches before they have to be removed, returned, and repositioned, and the box end does provide additional fastener access capabilities that you won’t find with other combination wrenches.

Do I miss the reach of my long pattern wrenches? Sometimes, yes. I don’t use my 440 wrenches all the time. Yes, these wrenches are spectacular, but sometimes I need or want the length or flat sides of a traditionally designed wrench. There are also times when I want a ratcheting wrench, in which cases these manual wrenches just won’t do. I also only bought a set in fractional sizing, and so if I need metric I also have to reach for something else.

I spent $160 (less 10% GJ member discount at Ultimate Garage) on a set of 13 fractional wrench sizes, model MOD.440-4. Metric sets are priced higher and lower, depending on the sizes and set configurations you want.

Update: I have since purchased additional Facom wrenches via Amazon UK and Amazon DE.

I’d buy these wrenches again in a heartbeat.

Yes, I heartily recommend them, but advise that you consider your needs before purchasing. Facom doesn’t have a huge foothold in the USA, and so warranty replacements – or even purchasing replacements – wouldn’t be easy.

Ultimate Garage is a fantastic independent vendor that carries a nice selection of Facom tools. Some of the Amazon 3rd party sellers offer free shipping, which is great if you just want to try one or two sizes for feel and evaluation purposes. Who couldn’t use an extra wrench in their most commonly reached-for size?

If you’re interested in giving these a try, consider purchasing just a single Facom 440 wrench for evaluation purposes. The handle ergonomics are superb, and both the open ends and box ends offer improved accessibility compared to other wrenches. But you have to ask yourself this – will the thicker box end and shorter wrench length be an issue? If so, then these wrenches might not be idea for you.

I believe these wrenches are made in Taiwan. It doesn’t say so on the wrenches, and I threw out the packaging a long time ago.