ToolGuyd > Hand Tools > Screwdrivers > Felo 522 Series Screwdriver with Grabber
If you buy something through our links, ToolGuyd might earn an affiliate commission. 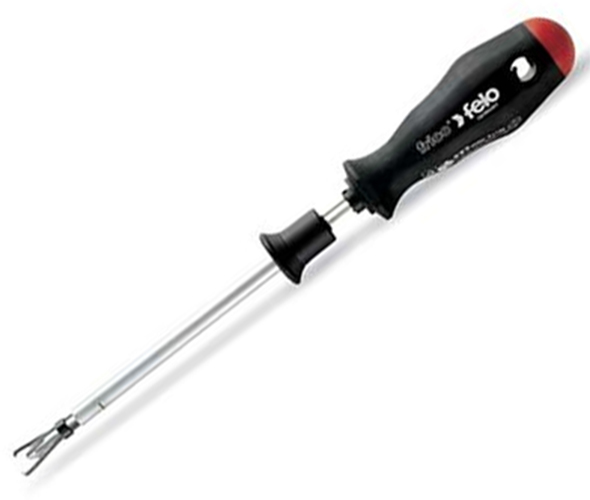 I came across an unusual Felo screwdriver while looking for something else. It’s got a built-in screw-grabbing mechanism, for holding onto fasteners when starting them in a tricky situation.

I’ve seen screw-holding attachments, but nothing quite like this one, which looks to operate similar to a parts-retrieval mechanism.

Amazon’s product description is all over the place. This isn’t a multi-tool or multi-driver; as far as I am aware, it’s a single size Phillips #2 screwdriver.

The price seems a little steep to me – $22 for a single screwdriver – but it’s also been a while since I’ve dropped a screw into a vital system. Knock on wood!! Dropping a fastener really sucks. Sometimes it’s an inconvenience, other times it’s a real project-stopper until the screw can be fished out of a piece of equipment.

Have you used this screwdriver before? Would you?

I’ve had good experience with Felo tools, but I’m not yet sold on the mechanism. Maybe I’ll ordered one to try out – hands up if you’re interested in this.

It does look like the screw grabber mechanism is entirely made of metal, which I’d think means it’ll last longer than some of the plastic contraptions I’ve seen.

Hmm, it also looks like the grabber can get a fix on fasteners that are being removed. That makes me feel a little better about the price. Most screw retention contraptions are only designed for starting screws.