ToolGuyd > Hand Tools > EDC, Pocket, & Multitools > Some Hands-Off Gushing About the Ferrum Forge N-Tac Folding Knife
If you buy something through our links, ToolGuyd might earn an affiliate commission. 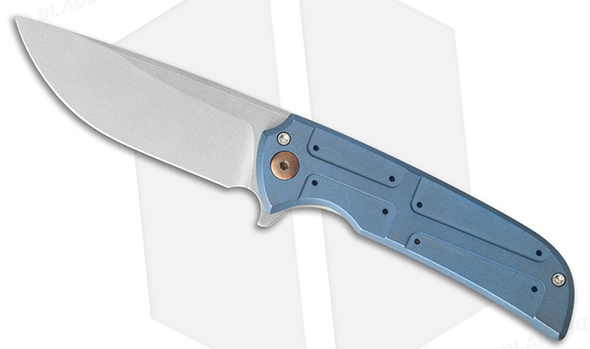 About 2-3 weeks ago, I heard of a small custom knife brand, called Ferrum Forge Knife Works. It was around the time when I posted about up and coming Chinese knife brands that enthusiasts are clamoring on about.

The Ferrum Forge N-Tac caught my attention in several ways.

Aside from the 3″ blade size, which I tend to favor, the titanium handle scales that look great, and the overall functional but eye-pleasing design, I was drawn to the designers and makers.

Ferrum Forge is run by two brothers, Elliot and Chris Williamson, and they look like they have a blast making knives.

This is from their About page:

It’s not particularly clear at a glance what we do here at Ferrum Forge, other than make knives, so let me try and tell you what we do.  We try to make the best knife for the price that we can here in the USA, in small batches (no more than 200), and we don’t make the same model again.  We take the notion of variety being the spice of life as gospel.

But I think you can learn a lot more about them from their YouTube videos, such as this one that shows off their “Maker’s Choice” N-Tac knives:

This is probably the first video of theirs that I watched, and I got a little bored before skipping around. But then I watched some others, learned more about the company, and watched the video again with greater enjoyment.

With the N-Tac, there were quite a few “Maker’s Choice” models, which featured unique customizations, and then there are also standard versions sold via their distributors and dealers.

I couldn’t find a lot of Ferrum Forge knife reviews online, especially of the N-Tac, probably because it’s still so new and only available in limited quantities. Oh, and they’re pricey too.

But in context, $515 is quite low compared to what many (most?) established custom knife makers charge.

I’m guessing that Ferrum Forge produces these knives through a combination of machine and hand-finishing options. I believe there was mention of an EDM wire cutter.

The N-Tac flipper folding knife features a drop point blade made from Bohler N690 steel, a top-shelf steel. This is what Bohler-Uddeholm says about it:

The knife also has anodized titanium handle scales that are available in several colors and and designs.

From what I have seen online, it’s a remarkable compact flipper knife. There are two things stopping me from buying one. First, there’s the $515 price.

$500 and change isn’t a lot for a custom knife, but it’s too much for me to justify.

Second, the clip isn’t really shaped for deep pocket carry, and there’s no lanyard hole. Maybe some paracord can be looped around the rear spacer?

Okay, so the high price is a lot more significant reason than the pocket clip or lack of a clear lanyard hole. The price is the only real deal breaker.

I very desperately want to see what’s so special about this $515 “entry-level” custom knife. I’m sure it flips open like a charm, handles like a dream, carries like it’s not even there, and performs exceptionally well. Design-wise, the Ferrum Forge N-Tac looks perfect, at least as far as I can tell without putting my hands on one. But it’s $515.

After reading up on the Ferrum Forge brothers, watching their videos, and seeing the passion they funnel into their knives, especially the Maker’s Choice ones, I found myself really wishing I could justify the purchase.

I’m also drawn to how the N-Tac looks like a heavy duty folding knife without looking tactical, or tacticool. I’m a fan of Zero Tolerance knives, but take a look at their new knives for 2016. Each and every one has that sort of badass tactical appearance that sometimes works, sometimes doesn’t.

The Ferrum Forge N-Tac, on the other hand, could almost pass for a gentleman’s pocket knife. I think that the Williamson brothers deserve a shout-out for what they’ve been doing.

I feel it necessary to tell you that I hate it when men’s magazines and websites tout products I could never afford and could never see a reason to buy. $1400 sweatpants? $2900 sneakers? A $195 “athleisure” t-shirt?

A few years ago I would have thought the same about a $500 custom knife. Now, I kind of understand it. Maybe?

Unless ToolGuyd readers surprise me and demand en masse that I purchase one for review or comparison purposes, there are lots of other things I would put the same money towards.

BUT, that all said, I’m hoping that at least one of you is into custom knives, and that you happen to be looking for a new EDC folding knife. If so, and you give the N-Tac a try, please tell me all about it!

The blue anodized version with “plates” design and texture sold out from BladeHQ, but there are other colors and styles still available. Other Ferrum Forge dealers might still have the blue plates version in stock.

Also, even if like me you cannot justify a custom knife like this one, check out their “past work” gallery, where they show off their Maker’s Choice designs:

Even if you’re not a Knife Knut (apparently that’s a thing?), I’m sure you’ll agree that some of those designs are just beautiful.

Oh, and some of the engraving work is done with a Dremel 200 rotary tool, their least expensive model:

That also impressed me about these guys. They’re doing what they do, using the tools they have. You don’t need fancy shmancy tools to be a great craftsman. Some of their anodizing is done in plastic cups and topless bottles!