ToolGuyd > New Tools > Festool Cantilever Systainer Tool Box Review
If you buy something through our links, ToolGuyd might earn an affiliate commission. 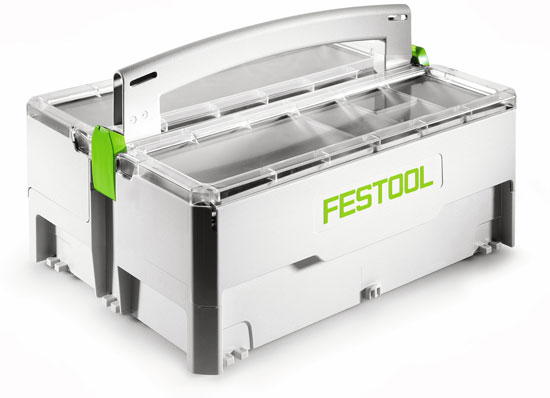 I am a big fan of cantilever tool boxes, which typically feature fold-out compartments that allow for easy access of tools without much digging around. I am also quite fond of Festool Systainers, which are efficient means of organizing power tools, hand tools, accessories, and supplies.

My order for Festool’s new 499901 cantilever Systainer tool box came in last night, and so I spent some time this morning filling it up. There are a couple of things I like about the tool box, and a few things I don’t. 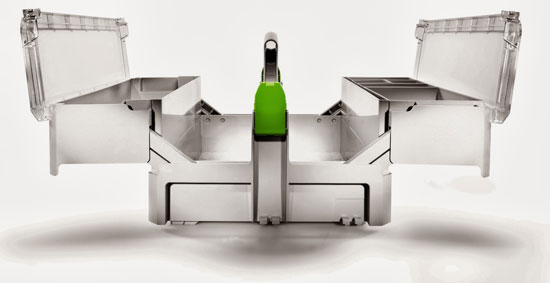 The Systainer tool box can stack on top of T-Loc and original Systainers, as well as any of Festool’s tool box Systainers.

Overall, the construction is top-notch, and I like the attention of detail integrated into the design. For instance, the fold-out sides have clear lids that feature textured and inset finger grips for easier lifting.

The tool box comes with 5 removable and repositionable small parts bins, which can be placed in any of the compartments.

The handle has a fixed position, which I am not perfectly happy about, but it does provide for greater rigidity and the ability to open either compartment at any time with minimal fuss.

$90 is a hefty price for a plastic tool box, but is easily understood given the complexity of the design. I also own a Hazet metal cantilever tool box ($120 via Amazon), as well as a Facom model, and feel that the Festool won’t be quite as durable. On the other hand, the Festool cantilever Systainer tool box is a lot lighter and easier to move around, even when full.

Since this tool box Systainer is designed to be able to connect and lock into other tool box Systainers, there is a deep recess at the bottom. This makes it so that there are two half-size bottom compartments instead of a single full-width section. I have not yet made up my mind as to whether this is a pro or a con, but ultimately this will be determined by what I use it for over time.

As mentioned, the handle is fixed and cannot be adjusted. This means that you cannot stick the tool box into a cabinet, Systainer port, or drawer without wasting a bit of vertical space. However, I think that this limitation is more than balanced by how the straight handle allows access to both sides of the tool box without having to move it around.

I think that the Festool Systainer cantilever tool box is a keeper. I would have liked a smaller price tag, perhaps $75 instead of $90, but I would rather pay $90 for this than deal with a lower quality tool box where designers cut corners to lower costs.

Right now the box is being used to organize and protect machinist tools, but I might turn it into a woodworking or robotics project box.

From an objective standpoint, I cannot find any noticeable flaws. All of the things I didn’t like about the tool box are a matter of preference. For the most part, I don’t think Festool could have went any other way with the design.

In a perfect world, I could see myself using as many as 10 of these tool boxes. But not for $90/each.

The test unit was purchased at its full retail price from Festool Products.