ToolGuyd > Power Tools > Cordless > A New Breed of Festool Cordless Power Tools
If you buy something through our links, ToolGuyd might earn an affiliate commission. 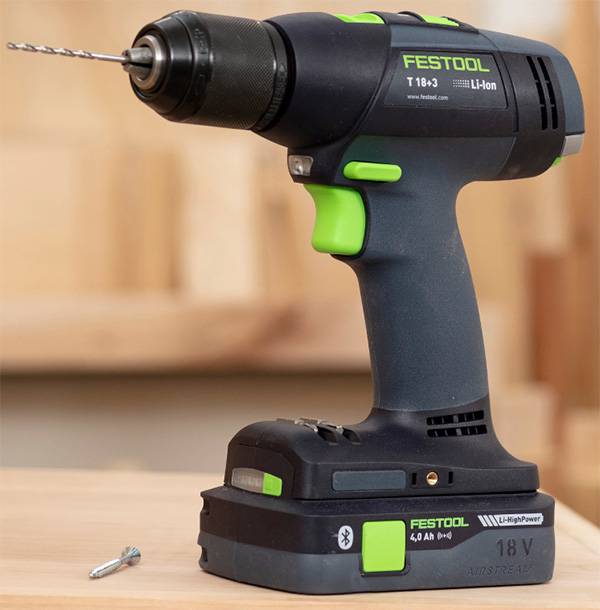 Festool is launching a new line of premium cordless power tools in North America, with availability starting in July 2020.

Festool describes their new line of 18V cordless power tools as being engineered to exacting standards of excellence, with features and pricing aimed at woodworkers, DIY hobbyists, and craftsmen of all [skill] levels.

The new Festool cordless power tools will be powered by a new compact 4.0Ah battery pack that has Bluetooth connectivity as a standard built-in feature. The Bluetooth tech enables communication with (compatible or retrofit) mobile dust extractors, enabling them to start automatically when the tools are switched on.

The new line of tools will start off with a cordless drill/driver, T 18 Easy, and impact driver, TID 18.

Both the kit and bare tool come with Systainer tool boxes. 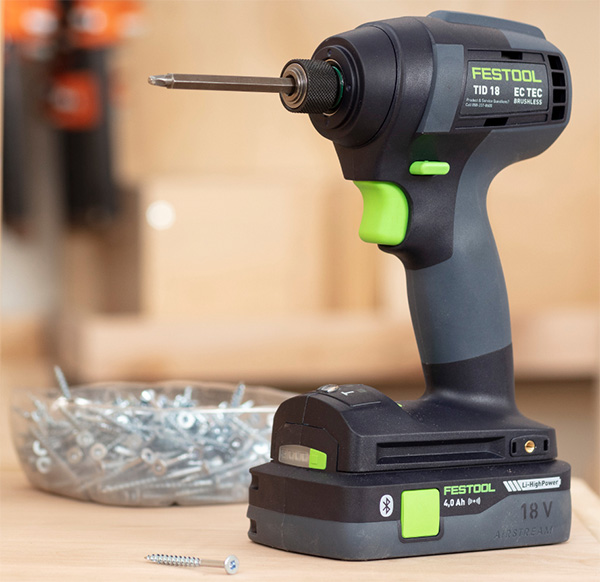 The TID 18 impact driver features a brushless motor, 1/4″ hex quick-release chuck, and 3 + T mode gearbox. There are 3 speed and torque settings, and the additional T mode detects the transition between sheet metal and wood and automatically adapts the speed.

Both the kit and bare tool come with Systainer tool boxes. The kit comes with (2) battery packs and a TCL 6 rapid charger.

This is partly why I see the new line as a new breed for Festool. I am a little surprised by the more basic nature of the new cordless drill, but sometimes that can be good, most notably when it comes to cost savings. The new impact driver looks reasonably competitive, and with its multiple speed modes it has the makings of a flagship model.

Both the drill and impact driver kits are bundled with Festool 18V 4.0Ah compact bluetooth batteries as standard, which will make them very attractive to new and existing Festool users, especially those with one of their Bluetooth-equipped dust extractors – or plans to buy one.

Festool’s Bluetooth remote control retrofit module, for their standard CT vacs, remains incredibly affordable ($80 via Amazon) – both in competitive regards and in the context of typical Festool add-on and accessory pricing. They also have new smaller vacs with built-in Bluetooth controls.

While not inexpensive, Festool’s new cordless power tool combo kits do look to offer a bundle discount. For example, there’s a new kit that bundles the new TID 18 impact driver with Festool’s HKC 55 cordless guide rail circular saw. A close-resembling saw-only kit is priced at $699, and the combo kit looks to add in the $199 bare tool kit for a $875 bundle price.

Here are the combo kits that are launching with the new drill, impact driver, or both:

Some of the kits also include a slew of starter accessories. All include a selection of Systainer tool boxes as well.

At the surface, it looks like Festool has simply come out with a new no-frills brushless drill/driver and competitively featured and spec’ed brushless impact driver. They say this is all part of a new cordless power tool line, and there seems to be a lot more to this launch than just a new drill and impact driver. Things seem a lot bigger than I initially consisdered.

Festool has a couple of cordless power tools, and this looks to be a new strategic effort at strengthening their appeal.

I own a couple of Festool tools, and have tried out a couple of others over the years. While I have generally been favoring cordless power tools, I have not upgraded my Festool tools, nor have I expressed much interest in doing so. My next Festool purchase will likely be for another corded sander, despite Festool launching hybrid dual-powered sanders 2-1/2 years ago.

Their new cordless power tool combo kits are still priced at “whoa, that’s a LOT of money” levels, but these new combo kits look to bring things together. Festool has offered tool plus dust extractor savings in the past, but I don’t think I’ve seen their cordless power tools bundled together like this before.

I think that a lot more people are going to pay closer attention to Festool’s cordless line.

As for the prices, even the $199 bare tools come with a Systainer. Personally, I really like the modular nature of Systainer tool boxes for individual power tools, but that does result in higher pricing. It’s not as big a deal when you’re talking about say a $700 tool, but the relative component cost is going to be a lot higher at $199 to $349.