ToolGuyd > Power Tools > Cordless > Festool CXS Compact Cordless Drill Preview
If you buy something through our links, ToolGuyd might earn an affiliate commission. 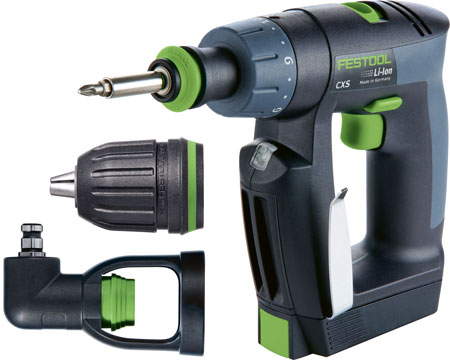 Festool’s upcoming CXS drill looks to be a very appealing addition to the compact cordless drill market. It features a D-handle, which is said to offer better ergonomics over other brands’ bulkier pistol-grip drills, and an interchangeable chuck system for great versatility.

The CXS weighs in at a hair under 2 lbs and can be fitted with a Centrotec chuck, a keyless 5/16″ chuck, or a convenient right-angle chuck. The drill also has two speed settings, 0-400 and 0-1200 RPM.

Of course the CXS is also paired with a robust 10.8V Li-ion battery, capable of driving over 200 screws on a single charge. These batteries have a full recharge time of 45 minutes (25 mins to 80%), but with 2 batteries included in the kit, there shouldn’t be any downtime.

The CXS kit includes the tool, 2 batteries, a charger, and 2 chucks for $250. A 3-chuck kit, including the right-angle chuck, is available for $300. Both kits are expected to be released at the beginning of June.

Update: The prices are accurate as of June 2019.