ToolGuyd > Power Tools > Saws > Festool Teases New SawStop-Equipped Table Saw
If you buy something through our links, ToolGuyd might earn an affiliate commission. 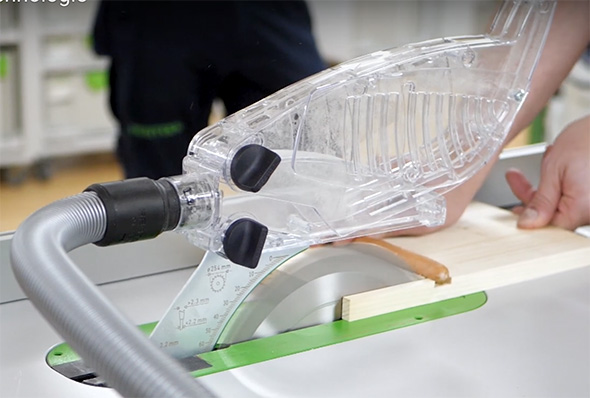 Over at Coptool today, they posted an interesting sneak peek they caught via a Festool video.

A screen-grab from the video, above, says 1000 words. But in case you want the full video, here it is:

A few years ago, there was a report that SawStop was developing a $400 table saw equipped with their flesh detection and brake technologies. However, that has not yet materialized.

If what is shown above is a SawStop-equipped Festool table saw that’s nearly ready to be announced in the [European] market, I can all but guarantee that it won’t be anywhere near $400 USD. Festool makes some great tools, but that quality doesn’t come cheap.

It should not come as a surprise that Festool developed a table saw featuring SawStop tech. After all, when the acquisition was announced, it was very clear that Festool would be utilizing SawStop’s active injury mitigation technology.

Our trainers are currently preparing for the Construction Fair so that they can answer any questions about the innovative SawStop technology. Experience the machine live at the construction fair from 4 to 8 February.

Oh, there are so many questions, the first two being: 1) will it be available in the USA?, and 2) how much will it cost?

Kudos to Coptool for breaking the story!