ToolGuyd > Power Tools > Cordless > Hands-On with the New Festool TID 18 Brushless Impact Driver
If you buy something through our links, ToolGuyd might earn an affiliate commission. 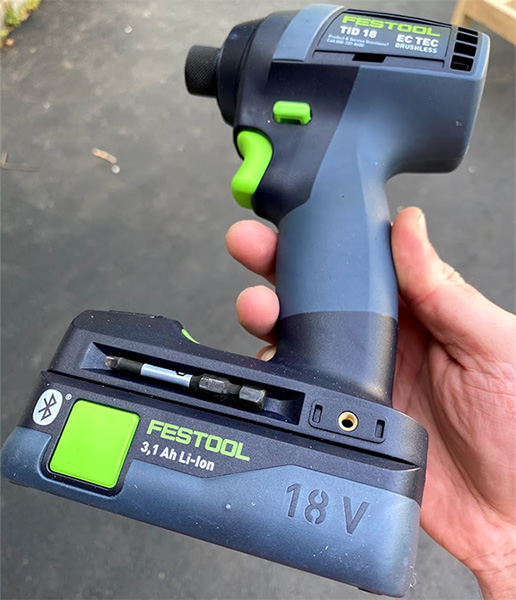 Festool USA sent over a test sample of their new 18V cordless brushless impact driver (thank you!), and I was able to put in some hands-on time with it the other day.

This isn’t a review, but rather an early, rough, initial half-assessment. In other words, my opinions can change.

I was working on building a wood stand with a bunch of 2x4s and 3″ Spax stainless steel deck screws. My impact of choice was a paid-for Hitachi/Metabo HPT 18V brushless triple-hammer impact driver, and after sinking some screws I added the Festool TID 18 impact driver into rotation.

Switching between tools helps with determining the feel of a new tool, allowing for rough comparison of power, application speeds, and ergonomics, all at the same time.

The Festool has a neat magnetic built-holder, and the batteries feature Bluetooth functionality that provide for automatic dust collection activation.

So with all that in mind, here’s the one-line summary of my experiences thus far:

So far, it seems to be a decent tool, solid in every way.

Driving in 3″ deck screws without pilot holes, the Festool felt like it lagged behind the Hitachi in speed, some of the time. Other times, I couldn’t tell if there was any difference or not.

The magnetic bit holder is a nice touch, the Bluetooth batteries might come in handy if I were to start using Festool cordless power tools for cutting wood, sanding, or other tasks that call for a dust collector to collect newly created chips and sawdust. (Please note that Festool hybrid-powered sanders have a different battery interface.)

My Hitachi triple hammer impact driver has a smoother mechanism, but that’s true for most impact driver comparisons it might be involved in.

Festool’s is good, but from a pure performance standpoint, it’s not better.

Which do I prefer using? The Hitachi/HPT.

However, I can’t say I wouldn’t recommend the Festool, as there are a lot of compelling reasons to get it.

Let me ask you a quick question – Do you plan on using Festool cordless power tools with a Festool dust extractor? If the answer is no, then this tool is probably not for you. With the kit, you’re paying for the Systainer tool box, and you’re paying for the Bluetooth-equipped batteries, although I would have expected Festool to be able and willing to raise the pricing to a higher premium.

As part of Festool’s 18V cordless power tool system, the new TID 18 brushless impact driver seems to be a solid and relatively competitive offering. To me, it makes the most sense as part of a Festool 18V cordless collection. If you own or plan to buy one of Festool’s cordless circular saws, for instance, their new impact driver meshes well with it, although your preferred choice of battery size might be different.

My Hitachi/HPT 18V  brushless impact driver is the only Hitachi/HPT cordless power tool that I use regularly. I liked my review sample so much that I bought one to give away, balancing things out so that I could consider my sample owned for personal-use.

Would I buy Festool’s TID 18 impact driver for standalone use, as a separate entity? Probably not. I do own some Festool power tools, and I have had great experiences with their performance and reliability. With this, the TID 18 should be a short-list consideration if I were looking for a new cordless impact driver, but there are too many other models that match or best its performance and user experience.

It’s the other features, namely the Bluetooth batteries and Festool 18V system compatibility, that really pile onto the purchasing decision.

I think that Festool owners, and those looking to buy a Festool 18V combo kit, will be happy with this model. It delivers good performance – in my experience so far.

I was worried that it would only deliver an acceptable experience, given the value-priced subcontext I sensed about its launch, but that wasn’t the case. I wouldn’t say it offers a superior experience, but it’s a solid pro-grade tool. I would say that it offers a polished experience, but the fact of the matter is that the Hitachi/HPT tool is smoother (and in fact the smoothest impact I have used).

There are a lot of non-Festool users hating on this tool, and I think a lot of that is undeserved. Having used it a little bit so far, it’s a solid tool that I wouldn’t mind using.

It’s not the best of the best, but it also wasn’t designed to be. That does make things hard, as it sets me down the path of answering the question who is this tool for?

If you’re a frequent Festool critic despite never having used their tools before, it’s of course not for you.

If you use other Festool 18V cordless power tools, or plan to, this is a fine impact that’s compatible with your other tools. Period.

If you’re brand-agnostic, there are reasons to include this model in your consideration, but no more or less than other brands. But if that’s the case, you can get a Dewalt impact and 3-speed drill kit for less, or even Makita’s flagship brushless impact driver kit.

I can’t say I am impressed with the performance of Festool’s new impact driver, but neither am I disappointed. I guess that’s a good thing, although it leaves me unusually unimpassioned. The TID 18 seems so much more compelling as a part of a grander Festool 18V cordless power tool system kit.

I am a little concerned that my candid impression might be construed as negative criticism, but that’s not how it’s intended. This impact isn’t amazing, but from what I can tell, it wasn’t at all designed to be.

It really seems to me that Festool’s product managers sought to coalesce their 18V cordless power tools, and conceived this impact driver as a strong choice for current and future users. That doesn’t mean it’s not suited for users new to the brand, but it’s less compelling for such users given the abundance of evenly matched and superior competition.

I’ll be putting in more time with this impact – what questions might you have?

Thank you to Festool USA for providing the review sample.