ToolGuyd > Power Tools > Cordless > Is Festool’s Track Saw Now Obsolete? Corded vs. Cordless in 2020
If you buy something through our links, ToolGuyd might earn an affiliate commission. 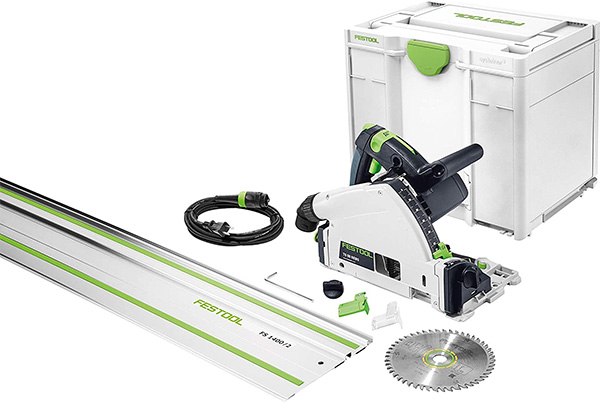 Has Festool’s corded track saw become obsolete in the face of strong competition from cordless models?

I spent the past couple of days adding plywood panels and 1-1/8″ butcher block-style wood countertops to my workbench, and gave my track saws a good workout in the process.

I own a Festool TS 55 corded track saw, and continue to enjoy the use of a Makita 18V X2 cordless track saw review sample that was provided by Home Depot.

The Makita track saw practically lives in the garage workshop and sees regular use. I use it outside on occasion, and when used inside I pair it with my Festool dust extractor that’s been equipped with a wireless remote.

Since I knew I had a lot of cutting to do, I brought out my Festool track saw, which has always delivered stellar performance. This time was no different; it performed nicely and left me with smooth and accurate cuts.

But, after fastening and removing the Festool guide rail from my MFT/3 table a handful of times, so that I could switch between cross-cutting and long rip-cutting operations, I charged up a pair of Makita 18V batteries and brought out the 18V X2 track saw. That’s when I noticed a difference in performance.

Going back and forth between the Festool corded and Makita cordless track saws, I found myself questioning whether the corded saw had become obsolete.

Yes, I know that Festool has their own corded track saw, and that my model of corded track saw was replaced by a newer model 7 years ago, but still – I think my corded saw is still reasonably representative of where the tech is today.

I plugged my saw into my Festool dust collector vac, and the automatic activation was wonderful. But, I have a remote on the tool end of the vac hose, and so I was able to easily activate the vacuum when the Makita saw was in use.

Using a Bluetooth remote is a bit clunky, and there are some automatic battery-powered-tool-sensing tech and vacuum options you could look into if you desire more effortless activation when using battery-powered tools.

Both tools delivered smooth and accurate cuts, and both saws were usually great when it came to dust collection, except when making smaller or narrower cuts.

My much-loved Festool saw felt a little different when cutting through the 1-1/8″ butcher block-style countertops. It didn’t feel slow, weak, or underpowered, but when going back and forth between saws, it was obvious that the Makita cordless saw delivered faster and easier cutting performance than my corded Festool saw.

The corded saw has constraints. Most notably, myself and presumably many if not most other Festool users will be connecting the saw to their Festool dust vacs. Festool’s vacs have a limit as to how much power they can supply to connected tools, and if the combined amperage is too great, there’s a chance that residential circuit breaks will start tripping.

Pushing the saws through 5 feet of 1-1/8″ hardwood (with some glue mixed in depending on where I was cutting), I could definitely feel the difference in cutting resistance. The Makita saw glided through similar cuts with noticeably less effort.

Neither saw has a factory-fresh blade, but if I had to compare the two I’d say the Festool blade has seen less use and potential wear than the Makita.

I tell myself that this is a tricky topic, but here’s what it comes down to: which tool would I buy today? Here’s what would factor into that decision:

I bought my Festool track saw 9 years ago. If I were to buy a cordless track saw today, what will the battery situation be like 9 years from now? 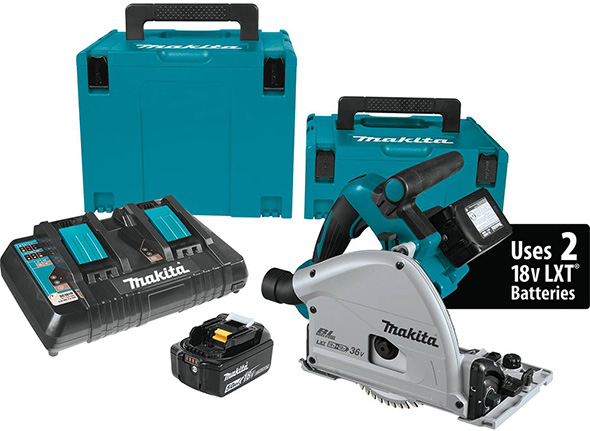 But, in the here and now, Makita’s cordless saw delivers better performance and comparable results (at least from what I could tell without microscopic scrutiny).

How often do I cut 1″ hardwood? Well… I actually have a bunch more projects in the works that will involve 3/4″ maple and birch, maybe thicker pieces of hardwood as well. I bet I’d feel a similar performance difference when cutting 3/4″ wood boards.

Festool has a larger track saw, the TS 75 REQ, but I’ve never considered it a good match for my use.

When it comes to pricing, right now I can get a full cordless Makita setup, with saw, charger, batteries, tool boxes, and a guide rail, for less than a corded Festool saw and guide rail bundle.

I’d need new Makita batteries after a few years. If I need them sooner, it would mean I gave the saw and batteries a good workout, taking advantage of the saw’s performance. If I need them later, potentially due to low use on the batteries, the approximately $130 to $200 price difference could go a long way towards the future purchase of replacement batteries.

I’d occasionally have to pay attention to the batteries’ state of charge though, as in my experience Makita’s newer batteries with built-in fuel gauges can self-drain over time.

The price difference between Makita cordless and Festool corded options will depend on the time of year.

At the time of this posting, you can get a Makita kit with 55″ guide rail for $569 at one vendor, and another vendor has a bundle with a 39″ guide rail for $499. Some times of the year you get bonus batteries as well.

I love my corded track saw, corded routers, corded sanders, corded hammer drill, corded jig saw, and my free-after-rebate corded Sawzall reciprocating saw. Of these tools, I continue to use my corded sanders and routers regularly, but not exclusively. At the time of this posting, there aren’t any cordless full-size routers. Yet?

I don’t regret my Festool purchasing decision in the least bit – this was a good buy back in 2011, and it allowed me to work on projects indoors with exceptionally good dust collection. But today? I think I’d go cordless – either with the Makita or perhaps another brand.

There’s no automatic dust collector activation, but the hose-end Bluetooth remote is the next best thing.

You don’t budget for a track saw if it’s not something you plan to use regularly. For infrequent use, perhaps a circular saw and edge guides or universal-type guide rails would be more economical. In other words, I wouldn’t be worried about the cost of replacement batteries several years from now.

I have been an advocate for corded tools, and they continue to have their place, but I don’t think I’d buy a corded track saw today.

See Also: When is the Last Time You Bought a Corded Power Tool? Cordless?

I can’t remember the last time I used my Festool track saw. I received the Makita from Home Depot in early 2018, and it essentially became my go-to plunge-cutting and track saw. If I remember correctly, my preferences started shifting when I pulled the Makita saw out for a couple of quick cuts outdoors.

There was one or two times when I thought my Festool saw was seriously bogging down. Nope, it was just the power cord snagging on the guide rail.

Some of my other corded power tools are obsolete, but I still use them for certain tasks. Not to mince words, I’ll be packing up my Festool corded track saw, and for an undetermined amount of time. I almost feel like this is a breakup letter.

I suppose that if I wanted to be able to use the saw all-day, then the corded can-always-be-powered nature would be a big benefit. If I had used the Makita saw from the start, I could have topped off the batteries during a break period. Or, for heavy use, one could invest in a second pair of batteries, in some cases not paying any more than for the Festool kit.

Sorry my dear old Festool corded track saw, you’re obsolete, and I don’t think I would buy you again today.